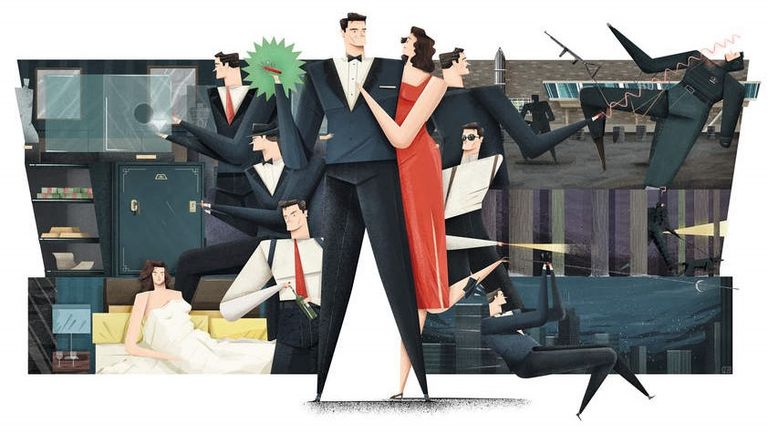 Q: that a tool in your pocket, GaGu?

A: That's a personal question, fella. But yes, actually, Guru does have a thing or two in his pocket. Part one of his loadout is a Victorinox CyberTool M (£82), a Swiss army knife all pimped up for the modern chap. The traditional big knife, small knife and thing-forgetting- stones-out-of-horses'-hooves are joined by an incredibly useful ballpoint pen and a screwdriver system that covers hex, Phillips, flat and even Torx heads. It's in and out of GaGu's trousers at least three times a day. Part two is a torch. Guru has recently gifted his old two-lumen incandescent Maglite Solitaire (£10) to the help following numerous complaints about the Guru household's strict 9pm lights-out curfew/complex network of man-traps. Instead, he's gone for something far more retina-scorching: a Peak El Capitan Pocket (from $60/£43). It's a single-AA tube that goes from super-stealthy dim to upsettingly bright via a silent and excellently named quantum tunnelling composite system. GaGu is aware that he'll attract undue attention from flashlight enthusiasts (torch nerds) for his choice, but Guru is right, so shut up. The third thing in GaGu's slacks is a slightly naughty one: the classic Leatherman Wave (£82), probably the best multi-tool in the world, in manly black-oxide finish. Its locking elements (including a pair of blades) mean it's technically illegal to carry one in public, and it does double up many of the functions of the CyberTool, but this is actually a serious tool for serious work. The pliers and wire-strippers are suitably torquey, and the diamond-coated file is particularly useful when Guru sustains a manly snagged nail. One final mention should be given to the contents of Guru's wallet. The James Bond lock-pick set (around £7) might have a non-specified manufacturer and (let's face it) an entirely unconvincing credit-card fascia, but it's useful if you've somehow locked yourself into your shed. Don't ask.

Q: What kit can I buy to shoot virtual-reality video?

A: Virtual reality is undoubtedly – no, wait, Guru means doubtedly – the technology of the future. Will we one day spend most of our days with massive headsets on, immersed in virtual worlds, pausing only to be violently sick at regular intervals? Possibly, but that's a bleak outlook. Don't let GaGu's curmudgeonly weak-stomached viewpoint spoil your desire to jump on the VR train and pull the whistle, though. If you want to film stereoscopic video at a resolution that's suitable for a screen pressed up against a human eyeball, you currently have a limited number of options – the market that began growing a few years ago seems to have fallen off a cliff, exploded, climbed back up the cliff and fallen off again. You could stick a couple of GoPro cameras inside the GoPro 3D HERO System case (£60) and do some complex digital wrangling to make your stereoscopic video. You could pick up a 4K camcorder with a 3D lens attachment (rare, and a bit of an expensive bodge if GaGu is completely honest). Or, if you're really serious, you could go absolutely mad and pick yourself up a broadcast-quality twin-lens camera such as the Panasonic AG-3DP1 P2 (costing an eye-watering £20,800). But we suspect you don't need that kind of pro kit just yet. There are also a host of monoscopic VR cameras set to hit the market in 2016 from the likes of Kodak, Nikon and LG, so keep your eyes peeled. Samsung's rather intriguing Gear 360, which uses a pair of 180-degree cameras to capture a reasonably seamless all-around shot, is probably the most interesting of the forthcoming pack – check out the demo videos on YouTube to see what it can do. As for kit you can actually get your hands on now, the 360fl y (£430) does an admirable job of capturing video that's 360 degrees on the horizontal axis and 240 degrees on the vertical, all with a single, visually unsettling lens. Plus there's a GoPro-mount adapter, meaning you can bolt this VR Eye of Horus to all of your usual mount points.

Q: Do I need to upgrade my Xbox? I hope not…

A: GaGu presumes you've heard Microsoft's Phil Spencer wittering on about the 'Windows Unified Platform', then mentioning that we could see a console-upgrade path to counter the seven-year gap between home hardware innovations. Guru doesn't think he was talking about the Xbox One. Hopefully, he wasn't. History teaches us that upgrades for consoles that weren't really made to be upgraded are doomed to enduser failure. Sega was the worst culprit: the Megadrive alone suffered then generation-too-early Mega CD, the generation-too-late 32X, the MegaNet modem, and the implausible Sega Channel satellite-dish attachment. The majority came to the console late as part of an attempt to 'extend its lifespan' (gouge money from saps), and did little more than chisel large cracks into the increasingly upset user base. Making its console more difficult or expensive to buy into would be idiotic. Microsoft is on the back foot, with sales lagging behind Sony's PS4 and that's why we're getting an Xbox One S.

Q: Are cheap eBaysmartwatches worth buying?

A: You already know the answer. Let's focus on the unfeasibly cheap U8 Smart Watch (around £10), merely as an example. If it stays on your wrist for ten minutes, it'll be something of a miracle because its strap is apparently nengineered from butter; the dim screen is basically only visible if you pay your local government to block out the sun; and you're going to need to recharge the battery every few hours. Obvious caveats aside, though, as a toy – rather than something you'll actually wear and use with some regularity – a tenner isn't too much to drop. You can even do proper Dick Tracy wrist-calling with the U8, though not without being added to GaGu's special list of judgement.

Q: Should I get my car chipped? Or is it dangerous?

A: You don't actually need to trick your car into going any faster. But feel free to insist that you do, and then explain that to your insurer. And then explain it to your local clutch-replacement centre, and to the nice fi reman who's dousing your now-fireball somewhere on the M4. OK, reprogramming or replacing your car's ECU – the chip that regulates its components – won't make it instantly combust, and you'll likely get a performance boost. But do it to a newish car and you'll invalidate the warranty, and in older cars you'll increase the risk of failure. Better to get a proper tune-up from a mechanic

A: Google and Apple have no interest in what's going on in your snaps, but a little social engineering goes a long way for the determined snooper – so Guru understands the need to keep things safely away from the cloud. There are plenty of external storage devices for the iPhone – the 128GB Leef iBridge (£150) for one – which will get what GaGu presumes are mucky photos off there in a flash. Android folks would be better plumping for a wireless hard drive like Toshiba's Canvio AeroCast (£90), presuming you'll be sensible enough not to enable its TV streaming features. SD user? Just take out the card and hide it. But not there.

GaGu is both back on the bike full force and cursing his postie daily: Nikola's new Zivo Titanium High Performance Pedals (left, $399/£282) are, thanks to a flurry of early orders, taking their time reaching Guru Towers. By building in a small amount of lateral movement, they promise to be more comfortable and add a good percentage on top of your power-per-stroke to boot – not that GaGu needs any more power in his stroke, you understand. All that exercise will soon be for nowt, of course, seeing as GaGu has backed this month's offi cial invention of the decade on Kickstarter – the $169/£120 biem Butter Sprayer (tagline: “Your butter…sprayed”). Shove a stick of butter in the top, press a button, and you can douse all manner of things – pans, toast, vegetables, troublesome neighbours – with on-demand aerosolised milk product. It even comes out of the nozzle cool, so you won't scald yourself if you spray it straight into your mouth. Because that's the first thing you're going to try.

As the sun hit that irritating height in the morning and evening, GaGu's face yearned for something special – and the maple-clad Ray-Ban Clubmaster Wood sunglasses (above, £252) heard the call.

They're not the most practical sports shades in the world, but adding wood to the classic Clubmaster frame design – which features a prominent brow shape – makes you feel like you're constantly lording it over the trees with a 'so what?' expression made of their very offspring. It's quite the ego-boost. Finally, the eternal quest to cover every square inch of Guru's ever-expanding palatial palace in Wi-Fi signal. GaGu is peering anxiously over the pond at the eero Home Wi-Fi System ($499/£349 for three modules), which creates a wireless mesh network in your home that works “in perfect unison to deliver hyper-fast, super-stable Wi-Fi”. But while he waits for that to be released in the UK, Belkin's N300 wireless extender modules (£31 each) are plugging the niche nicely without quite as many grandiose claims.