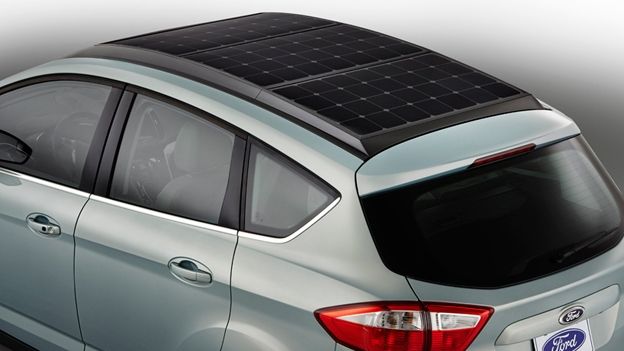 Ford will be showing off a solar powered concept car at the Consumer Electronics Show in Las Vegas next week.

The Ford C-Max Solar Energi Concept features a solar panel on the roof. It has the ability to track the sun and can draw power the equivalent of a four-hour battery charge.

According to Ford, the car can travel up to 21 miles just on electricity from the solar panel.

It will be showing off the concept car at CES next week.

The company has said that once it has shown off the car, it will begin feasibility testing to see whether the solar powered C-Max could make it into mass production.

Ford has said that the solar roof panels will use a separate off-vehicle solar concentrator lens. The company has said that the lens works similar to a magnifying glass, ensuring the panels absorb enough energy.

The lenses will follow the movement of the sun, allowing Ford to boost the power collected by up to eight times. It will also feature a conventional charging socket to ensure it can be topped up in the event of a cloudy day.

According to Ford, a day worth of sunlight will have the same effect on the car's performance as its plug-in hybrid models. They have an estimated range of 620 miles.

The concept car was developed in partnership with the Georgia Institute of Technology and SunPower Corp.