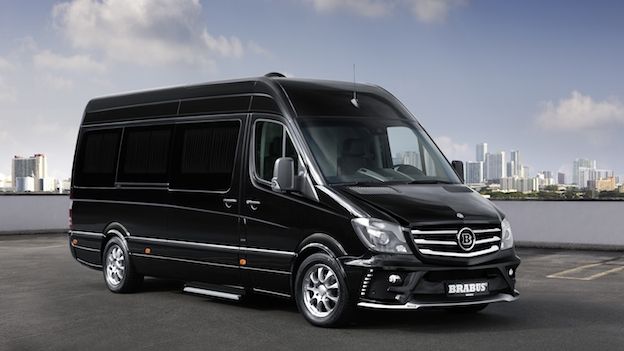 The humble Mercedes Sprinter can typically be found blazing a trail in the outside lane of most motorways up and down the country.

Usually transporting parcels, old sofas and paint pots, it's not the most glamorous proposition on the road but German tuning firm and renowned Mercedes-fettler Brabus hopes to put an end to all that.

The Business Lounge is quite simply the most exclusive Mercedes Sprinter ever made, featuring an interior that puts most private jets to shame and enough on-board gadgetry to keep even the busiest minds occupied on long journeys.

Outside, Brabus has added swanky LED daytime running lights, a sporty body kit, 18-inch alloy wheels and a beefy exhaust system but the real magic happens when the side doors are slid open.

Upon entering, potential customers are treated to four leather-clad executive seats that are laid out in a face-to-face formation for on-the-fly business meetings or impromptu champagne quaffing sessions thanks to the built-in chiller cabinet.

The swanky interior is sure to have oligarchs swooning

The ceiling is covered in 2700 individual LEDs that can display a number of themes, including a fireworks display and a starry sky. Passengers can fully recline the chairs to enjoy said ceiling light show and even receive a massage at the press of a button.

Those in need of entertainment can enjoy the on-board Wi-Fi or even catch up on Netflix boxsets via the 42-inch screen, which is also connected to a Blu-Ray player and a PS4 console for epic, on-the-move FIFA tournaments. Don't worry, there is also a coffee machine should gaming run into the small hours.

Windows have made way for solid panels, presumably to protect occupants from prying eyes, but those suffering from carsickness can see what's going on outside thanks to a number of exterior cameras, which project a live feed onto the interior monitors.

Unfortunately, there's no word on price as each Brabus Business Lounge is strictly made to order. We can guarantee it's more expensive than taking the Mega Bus.