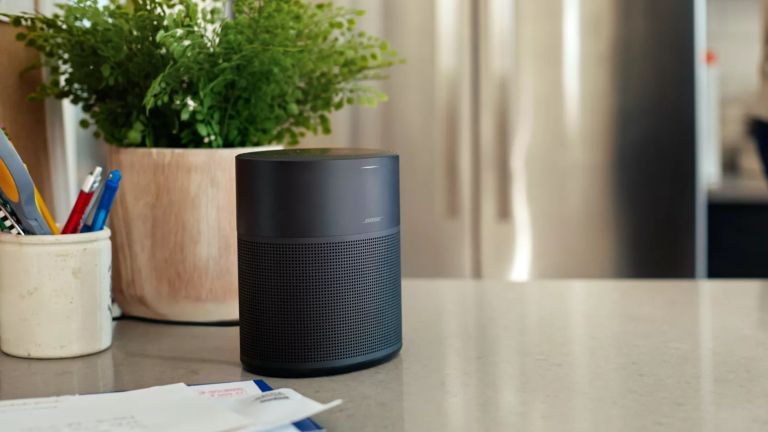 Bose has announced its new Home Speaker 300 – a smaller take on the Bose Home Speaker 500 unveiled last summer. Like its bulkier brother, the Home Speaker 300 has physical keys on the top to control playback, as well as load presets – like your favourite playlist on Spotify, or radio station on Apple Music – so you don't have to rummage for your smartphone each time to play something.

According to Bose, the Home Speaker 300, which stands around 6-inches tall, can deliver "powerful bass and true 360-degree sound," despite its diminutive stature. And just as owners of Sonos smart speakers, Sonos One and Sonos Beam, can new use Google Assistant AND Alexa, now so can owners of Bose smart speakers, including this new one.

Downsizing from the larger footprint seen on the Home Speaker 500 has resulted in Bose ditching the small LCD display used to display album artwork for whatever is currently playing through the Bluetooth-powered speaker. So, if you're only here for the album artwork, it's worth avoiding the Home Speaker 300.

The smaller sibling does support AirPlay 2 and Bluetooth. It can also link with the other smart speakers and soundbars in the Bose range, to create a multi-room experience not dissimilar to the one offered by Sonos.

Like Sonos, which rolled-out the same feature earlier this month, Bose is also bringing Google Assistant to its smart speaker range.

That means you'll be able to do all the usual voice assistant-powered tricks, including getting the latest news and weather updates, dimming your Philips Hue lights, ordering Ubers, setting timers, finding out the GDP of Swaziland, and more.

Bose has fitted the speaker with a small LED strip on the front of the Home Speaker 300 that lights-up whenever the microphone is activated with the "OK, Google" or "Hey, Google" wake phrases, which is sure to appease those who are worried about allowing an always-listening speaker into their home.

There’s no word yet on UK availability or pricing, but we'll update this article as soon as we hear back with details on that. However, UK customers with existing products from the Bose Home Speaker range (Home Speaker 500, Soundbar 500 and 700) will still benefit from the addition of Google Assistant. These were already compatible with Amazon's rival talkative AI companion, Alexa.