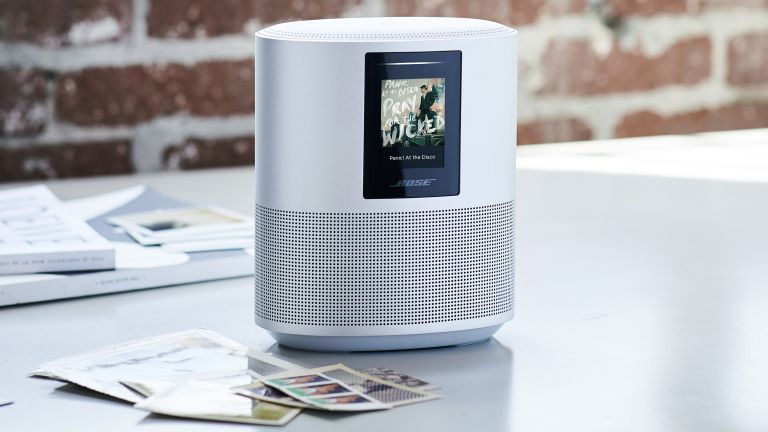 Have you hankered after a Sonos One – without doubt one of the best products of the past 12 months – but held back thinking, "but I need Bluetooth… and a screen… and I want it to look quite a lot uglier," (well, that's how it looks in the photos; maybe it's nicer in real life)? Then the Bose Home Speaker 500 is what you've been waiting for.

The Home Speaker 500 – which, come on guys, that is a terrible name – will also get AirPlay 2 for simple streaming from Apple devices in early 2019, but for many the killer advantage it has over Sonos is the inclusion of Bluetooth. This simple and largely fool-proof way of streaming sound remains incredibly popular, despite multiple advances in Wi-Fi-based streaming.

Bose is claiming the widest sound stage of any smart speaker – it "crushes the limitations of spaciousness from a single enclosure," apparently. Just having stereo from one box is impressive enough in this market, however.

“Voice-controlled speakers aren’t new, and there are plenty of great options to choose from. But we had a different vision for ours, inspired by what we could uniquely do to make the experience better,” crowed Doug Cunningham, category manager in the Bose Consumer Electronics Division. “All of our new smart speakers double up on functionality.  It takes just one Home Speaker 500 to deliver true stereo separation – there’s no need to pair two.

Also likely to impress is the inclusion of the same mic tech found in Bose headsets and headphones. Alexa's hearing is not great at the best of times, and being able to pick up your mumbled orders over the sound of loud music is a huge technical challenge.

Here, a custom-designed eight-microphone array is 'precisely positioned for accurate near-field and far-field voice pickup — when it’s quiet, noisy, or your music is playing loudly.'

Bose has used two custom drivers, pointed in opposite directions, bouncing sound off walls, 'separating instruments to the far left and right, and placing vocals where the artist did.'

With Bluetooth, Wi-Fi and Alexa, you've certainly got no shortage of musical options, although you will need an Amazon Prime Music or Music Unlimited subscription, or Spotify, to make the most of Alexa's a-whicky-whicky-waaaa-wup-DJing skills.

Multi-room listening is also possible. That screen is just for looking at album art, not making video calls as on the Echo Spot. The unpleasingly squat casing is seamless anodised aluminium is a compact 20.3cm high x 16.9cm wide x 10.9cm deep, and has buttons up top, for controlling basic functions.

For all your under-the-telly audio needs, the Bose Soundbar 700 and 500 again combine Bluetooth, Wi-Fi and Alexa for access to a whole lotta music, and 'unbeatable ease of use.'

The Bose Soundbar 700 was engineered to outperform every other product in its category, and looks considerably nicer than the Home Speaker 500. It's 5.7cm high by 10.8cm deep and 98cm long, and looks a treat in subtly curved metal and tempered glass.

To mimick surround sound without needing additional speakers, Bose PhaseGuides send multiple channels of a soundtrack or song throughout a space, 'placing discrete sound in places where there are no speakers.'  There's also an intelligent universal remote thrown in.

The more affordable Soundbar 500 is smaller (4.4cm x 10.2cm, and just over 81cm long, with 'a subtle matte finish to fit neatly under a television screen, virtually invisible – until you turn it on.'

Both the Soundbar 500 and 700 use Bose's ADAPTiQ to optimise sound to your lounge. HDMI Audio Return Channel (ARC) is supported – Sonos only just got around to adding this to its range with the Beam – and the speakers can be wall-mounted, and also expanded into a proper 5.1 setup with the addition of a wireless bass module and mini rear speakers.