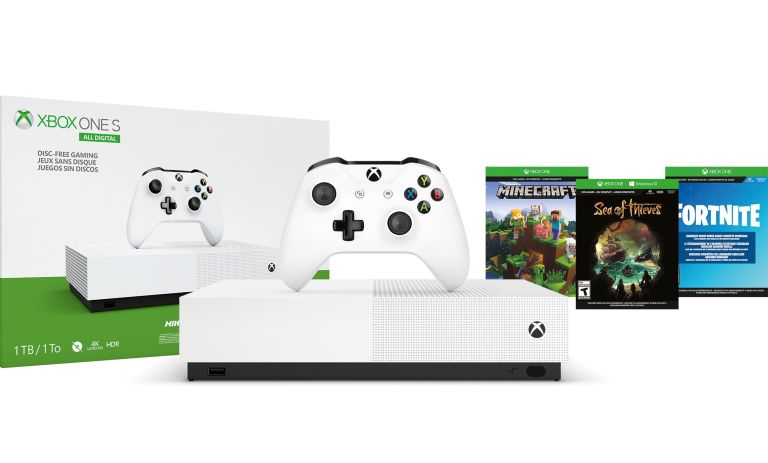 The console alone is priced at £199.99 at competing retailers, while Sea of Thieves and Minecraft would usually set you back £60. Fortnite - the ever-popular battle royale game - is free-to-play, but the exclusive skins can be difficult to get hold of, and this particular Legendary skin is only available as part of the Xbox One S console bundle deals. Plus you get 2,000 V-Bucks - Fortnite's in-game currency - to boot, which is the price of a Legendary skin in the game, and works out to approximately £16.

Xbox One S | Fortnite |Minecraft | Sea of Thieves | 2000 V-Bucks | RRP: | Deal Price: £199.99 | Save: £75
Argos' Xbox One S 1TB All-Digital Edition bundle deal is good enough to rival anything you might see on offer in a couple of weeks when the Black Friday sales kick in. As well as the three games and the Fortnite freebies, you'll find a one month Xbox Live Gold subscription included, which you'll need to partake in the multiplayer-only Sea of Thieves, as well as the battle royale portion of Fortnite.View Deal

Unlike the standard Xbox One S, the Xbox One S All Digital Edition does not come with a disc slot, with the system designed with the excellent Xbox store in mind, which delivers the entire Xbox games catalog in digital download format. For users who want quick and cheap access to the very best games Xbox has to offer, as well as simple access to Microsoft's Xbox Game Pass game streaming service, the Xbox One S All Digital Edition is a great choice.

This deal is a top value for money deal in our eyes and we're glad Argos has decided to continue to treat its customers to the savings we saw on similar bundles back in September. We'll certainly be keeping an eye on the website for even more deals to come as we barrel towards the Black Friday sales in the coming weeks.