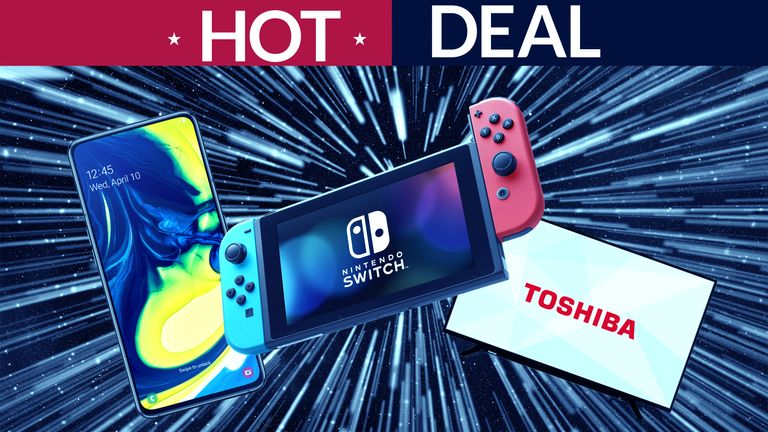 This Black Friday deal from EE is simply remarkable. That's because if you upgrade to a new Samsung Galaxy phone right now with SIM plan at the UK network then you can choose either a Nintendo Switch games console or Toshiba 4K HDR TV as a free Christmas gift.

Yes, you did read that right. Pick up a Samsung Galaxy A80, A70 or A40 right now through EE and you get either the fastest selling console of all time or a quality, ultra high definition TV for absolutely nothing.

You'd think that there would be some downside to such a sweet deal, but with an extras-stuffed SIM plan with 10GB of data per month, unlimited minutes and texts, and EU roaming included, as well as totally free fast delivery on everything, this offer really does deliver across the board.

The full details of the deals can be viewed below:

Samsung Galaxy A40 + Nintendo Switch or Toshiba 4K HDR TV | Up-front cost: £0.00 | Monthly cost: £31.00 | EE
The 64GB Samsung Galaxy A40 delivers a roomy 5.9-inch Super AMOLED 2,340 x 1,080 resolution screen, 4GB of RAM, a triple camera system and a 3,100mAh battery. You can pick it up in this deal for nothing up front and then £31 per month with a 24-month plan from EE that delivers 10GB of data and unlimited minutes and texts. Then simply select the free gift you would like, either a Nintendo Switch games console or Toshiba 43U2963DB 4K HDR TV.View Deal

Samsung Galaxy A70 + Nintendo Switch or Toshiba 4K HDR TV | Up-front cost: £0.00 | Monthly cost: £39.00 | EE
Stepping things up a rung here, the 128GB Samsung Galaxy A70 delivers a massive 6.7-inch 2,400 x 1,080 resolution Super AMOLED display, 6GB of RAM, a quad-camera system and 4,500mAh battery. Android 9 Pie is run out of the box. This variant of the free gift deal can be bagged for nothing upfront and then £39 per month over the course of a 24-month SIM plan. The plan delivers 10GB of data each month, as well as unlimited minutes and texts. Either the Nintendo Switch games console or Toshiba 43U2963DB 4K HDR TV can then be chosen as a free gift.View Deal

Samsung Galaxy A80 + Nintendo Switch or Toshiba 4K HDR TV | Up-front cost: £0.00 | Monthly cost: £49.00 | EE
The most powerful phone on offer in the EE free gift deal is the 128GB Samsung Galaxy A80. This handset delivers the same massive 6.7-inch, 2,400 x 1,080 resolution Super AMOLED screen as on the A70 above, but increases the speed of the processor as well as well as bumping the handset's RAM up to 8GB. The A80 also boasts a motorized pop-up selfie camera, and enlarged 48MP rear main lens. Aside from that, though, you get the same overall package, same SIM plan, and also the same free gift choice of either a Nintendo Switch games console or Toshiba 43U2963DB 4K HDR TV.View Deal

If you like the idea of bagging a free Nintendo Switch or Toshiba 4K HDR TV but prefer Huawei phones to Samsung devices, then this rival deal is definitely worth a look. You get the powerhouse Huawei P30 Pro along with a data-stuffed plan, as well as you choice of free gift, for £50 up front and then £59 per month. This isn't the cheapest deal on offer, but the P30 Pro is in a league of its own when it comes to taking astonishing photos with its state-of-the-art periscope camera.

What's most refreshing about these deals is that they are on Samsung's excellent A-range of devices, which while not packing the extreme power delivered on the S-range, actually deliver a just as good all-round package in terms of functionality. For example, even the entry level A40 comes with a dual rear camera array (16MP + 5MP) as well as a powerful selfie camera (25MP), meanwhile, both the A70 and A80 deliver screen sizes that out-punch many flagships, with 6.7 inches of real estate making watching movies, playing games and browsing social media a pleasure.

Each of the Samsung phones here also run Android 9.0 Pie out of the box and come with the South Korean maker's best-in-class fit and finish. The A70 and A80 also deliver some really neat features that are usually the preserve of much more expensive phones, such as an under display fingerprint reader.

All in all we think that if you're a fan of Samsung phones and are looking for an attractive upgrade that will go the distance, then these offers are definitely worth a look, as they land you the phones for, literally, nothing up front, and then only necessitate an affordable month expense. And that is saying nothing about the choice of free gift, either, with both delivering top, highly-rated tech into your home.