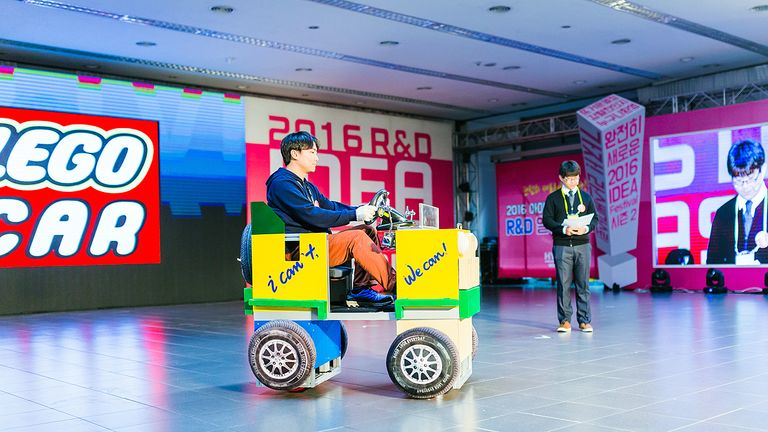 Dry ice fills the air, shards of light pour from swivelling lamps, streamers explode from cannons and bass-heavy dubstep-style tunes thump from stacks of speakers. Enter stage right a young Korean chap riding atop a small electric car that looks like a child's drawing of a car.

It's the annual Hyundai Motor Group Ideas Festival: a celebration of engineering that veers from exciting to eccentric, like Lewis Hamilton on a lost weekend.

• The best electric cars for every budget

• Nothing but the finest hybrid cars

Key themes in 2016 include pollution, accident prevention and the ever-adapting role that technology plays in our everyday lives.

The show, which is held at the Hyundai Motor Group's main R&D centre just outside of Seoul in South Korea, is packed full of absolutely crackers concepts, a number of which are largely lost in translation or buried beneath piles of typically Korean LEDs, KPop and cartoon characters us westerners have never heard of.

Regardless, there are always a few ideas that actually make sense, while some contraptions manage to silence the sniggers and go on to form - or at least influence - future automotive design.

T3 took a seat in the front row of this slightly barmy engineering bonanza. Here are our highlights…

This may have been the overall winner of the competition, bagging its creators a trip to Las Vegas and a few thousand Korean Wan to play with, but that doesn't necessarily mean it's a soberly thought-through product that people have been clamouring for.

In this concept, semi-translucent LED touchscreens replace the passenger windows of a vehicle, allowing you to doodle onto said screens, like there's virtual condensation on the windows. You can then save the results to The Cloud for later viewing on your devices.

According to the team of young minds behind it, Sketch Book was inspired by rainy car rides as a kid, where the windows would fog up, allowing little ones in the rear to draw stick men. Not penises. No way.

As a result, Sketch Book users must first blow on the screens to activate them. From here, you can sketch using just your fingers, with plenty of colours and brushes on offer if you're feeling particularly creative.

It went down well with the Kia and Hyundai big cheeses, who claimed that they had already considered installing a similar system on South Korea's bus fleet to entertain crowds at the upcoming 2018 Pyeongchang Winter Olympics.

A sure-fire way to impress judges at any engineering festival is to show compassion for the next generation and this concept - which is basically a pimped-out, ultra-safe school bus - did just that.

The impressive i-Guardian - 'I' means 'child' in Korean, which led to MANY local jokes about the iPhone being for babies, woah boy! - features a number of active safety technologies that could help prevent accidents involving school kids on the road.

There's a camera at the front that beams live footage to a large screen installed in the rear window, allowing cars behind to see if young children are about to cross the road.

But more impressive is the retractable speed bump that shoots out from underneath the bus to deter cars from attempting to pass at speed, potentially putting kids in danger. Hey, what could possibly go wrong with that?

The canny designers also installed Near Field Communication chips into the kid's backpacks, which could send a message to compatible car navigation systems and warn drivers that there may be children in the road. Clever stuff.

Sadly, this is nothing to do with the singers of Crazy, Crazy Nights. But it is crazy.

Put simply, Kiss on the Road turns any vehicle into a mobile printer, able to spray messages directly onto the road surface. I know, right?

To this end, the Kiss on the Road team took a Hyundai i30 hatchback and bolted on a complicated rig of paint spray nozzles that can effectively print any message or logo onto the road surface below, so long as the car is driven at around 20mph or above.

The engineers admit that they see it as a novelty product, which could be used at motor shows and festivals to entertain crowds. However, one Hyundai exec present suggested that it could be useful in an emergency situation, with a message sprayed onto the road to warn drivers of an accident up ahead or danger in the road.

Don't hold your breath for 'Kiss on the Road' appearing in the brochure for your next Kia Sportage, though.

Now THAT is what I call an attractive looking car. Looking like it's part vehicle, part pitch 'n' putt golf course, Moving Forest's roof-mounted air-purifying unit could be the answer to pollution in densely populated areas. Erm, maybe.

The team demonstrated how the special filter, which contains a powerful calcium hydroxide solution, could successfully cleanse the air of nasty dust and dirt particles.

Attach one to the top of a passenger car such as the Hyundai Ioniq used here, andyou have a mobile smog-busting device that could help us all breath easier.

Hyundai Motor Vice Chairman Chung Eui-sun seemed impressed and could see it being fitted to Seoul's 10,000-strong fleet of buses.

Not, perhaps, the most aerodynamic vehicle ever built, Lego Car - which we're pretty sure isn't affiliated with Lego in any way - actually makes a lot of sense if you can look past the Duct tape and dodgy bits.

Modern humans love to personalise their possessions and often chop and change gadgets three or four times a year, so why not apply the same thinking to a car?

Lego Car uses a modular platform, which means that the body can be easily removed from the chassis and replaced with different designs in a matter of minutes.

This is made possible thanks to drive-by-wire steering and throttle, which aren't physically connected, making the separation process much simpler.

The design team claims that third-party manufacturers will be able to create these modular elements, opening up the possibility of a sort of App Store for cars of the future.

Things took an even more peculiarturn when Alpha Goo rolled onto the stage. This BB-8-esque droid 'could' one day be the perfect robot companion for every futuristic family.

Like the Lego Car, it's a modular design. You can swap its magnetically levitating head for various other nodules, including a speaker for blasting out tunes, a projector for beaming films on to any surface or a, er, steel tray. If you want Alpha Goo to act as a kind of grotesque, decapitated waiter.

What it had to do with the automotive sector, we will never know, but it touched on Amazon Echo and Google Home's notion of an AI interface that tracks your every move, but it's better because Alpha Goo physically does so, following you everywhere you go, like a spherical bodyguard.

My eyes! This, quite simply, is a tiny city car that's absolutely plastered with cutting-edge OLED panels, capable of displaying text and graphics beamed from a smartphone.

Alas, once the flashing lamps had finished singeing our retinas, we were able to see the faces of the engineers drop as one of Hyundai's most senior employees pointed out that it is currently illegal to display such blinding visuals when a car is moving, in Korea.

Still, we can see it being a big hit in Las Vegas - roll on next year's CES…