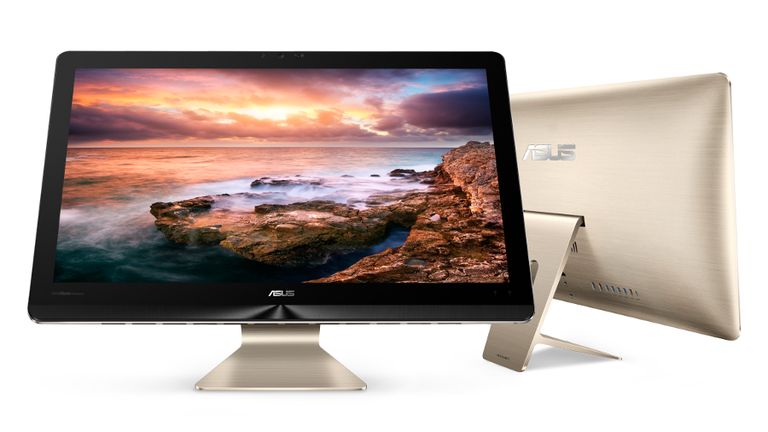 All-in-one computers are the tidiest and most elegant subcategory of desktop PCs. There's no large tower case to clutter up your room, no cables and no need to worry about whether your speakers are connected or not.

And with a modern AIO, there's no sacrifice in performance either – gaming, video editing and creative work are all possible, with some models sporting 4K screens and beyond. They look great, work brilliantly and offer a natural simplicity just by being a computer that sits on your desktop rather than underneath it.

An amazing display, powerful components and an impressively thin design

Apple's top-end iMac has the highest resolution display of any all-in-one computer, and supports a wider colour gamut in the late-2015 model. It comes with an Intel quad-core processor based off the latest 'Skylake' architecture, offering plenty of performance for all kinds of tasks, including gaming, thanks to the inclusion of an AMD Radeon M380 graphics card.

The aluminium build quality of all iMacs is second-to-none, with screen edges that are slimmer than many standalone monitors. The way it curves towards the centre is the only clue an entire computer is housed within it.

It runs the latest version of Apple's desktop operating system called OS X, which, like Windows, has its own quirks, and might take some acclimatisation if you've always been a PC user. But it's generally a great desktop OS, and if you already have an iPhone or iPad you'll find they work very well with Macs.

The base model 27-inch iMac isn't unreasonably expensive, but Apple charges a lot for its upgrades. You should absolutely go with an SSD or Fusion drive over the 1TB hard disk, which adds to the cost slightly, but the extra performance it provides is more than worth it.

An AIO with customisable components

-Expensive-Upgrading of some components is limited

The Z1 G2 is a workstation-class all-in-one PC aimed at graphic designers and artists. It comes with an Intel Xeon quad-core processor and an optional Nvidia Quadro graphics card, which are perfect for handling complicated effects in video editing tools, 3D rendering packages and Photoshop.

But there's more. Unlike just about every other AIO PC, the Z1 G2 has been designed so the user can upgrade the components. The screen flips up, not unlike a car bonnet, and just about anything inside it can be swapped out and replaced.

There are limits to this though and some of the custom parts have to be ordered from HP, but it's still more customisable than any other AIO design.

Asus offers a 4K display with its latest AIO

If you love the all-aluminium appearance of the iMac, but would prefer a Windows PC, Asus has you covered with the Zen AiO Pro, an all-in-one that bears an uncanny resemblance to Apple's flagship desktop computer, with a similar brushed aluminium design.

While there's an entry-level 1080p model with an Intel Core i5 processor, the souped-up version has a meaty specification, with a Core i7 CPU, a 4K touch-sensitive display, an Nvidia GeForce GTX 960M graphics card and a massive 512GB SSD, with up to 32GB of DDR4 memory.

This device is a tablet and AIO PC

The XPS 18 is a massive 18-inch tablet that can be used like an all-in-one PC, with a bundled wireless mouse and keyboard. Flexibility is the order of the day, as the 1080p touch-sensitive display of the XPS 18 can be used vertically, horizontally, on the couch or the kitchen table.

In tablet mode it has quite impressive battery life, with a lightweight design that just about matches most laptops, and great stereo sound from its slim speakers. The power cord plugs directly into the stand, keeping wires neatly away from the display. And the XPS 18's performance is reasonable too, providing it's not taxed by demanding games.

An AIO with a strong focus on gaming

+Powerful gaming graphics card+Can be used as a standalone display

All-in-ones with a specific focus on gaming aren't too common, which is why MSI's AG270 stands out. As standard, it comes with an Nvidia GeForce GTX 970M graphics card, or can be upgraded with an even more powerful GTX 980M.

Both the 1080p and 1440p versions have touchscreen IPS displays, with flicker-free panels and lower blue light emission. There's also the option of using three SSDs in a RAID array for superfast storage performance.

MSI has thought of a few other gaming-related features too. There's HDMI-in, so you can hook up a games console to use with the AG270's display, which can be wall mounted with VESA connectivity, and MSI has some bundled software for streaming your gaming sessions.

Google's Chrome OS is much less demanding than either OS X or Windows, and runs well on more affordable hardware, which could explain the low price of this AIO from LG. You need an active internet connection to use most of the cloud-based software, such as Google Docs, but it still works in offline mode too.

And while it's not really aimed at power users, gamers or graphic designers, the Chromebase is a simple system that costs less than an iPad, with everything you'll need for basic computer use. It looks good for the money, and with a webcam for Google Hangouts, speakers and USB ports, it's pretty flexible too.

The smaller iMac now has a Retina Display as well

Apple recently upgraded its 21.5-inch iMac with a 4K display, along with the latest Intel Skylake processors. Whichever screen size you opt for, an iMac makes a great all-in-one computer, and this smaller version shares the same slim aluminium design as its large sibling.

It comes with a quad-core Intel Core i5 processor, 8GB of memory and a 1TB hard disk as standard, although the graphics card is restricted to Intel's Iris Pro Graphics 6200 in the smaller iMac.

And while the £1199 asking price isn't extortionate, a few choice upgrades make it a much better computer, but add to the cost. We recommend upgrading the storage to an SSD or Fusion Drive for faster load times, and increasing the memory to 16GB is a good idea when purchasing, since the 21.5-inch model does not have a slot at the back to fit your own memory further down the line, like the 27-inch model does.

A slim design that can be lowered for horizontal use

The design of the 23.8-inch A540 stands out in a way other Windows-based AIOs don't, with a really sleek appearance, an ultra-thin 10-point multi-touch display and a stand that lets you move and lower the screen as you desire.

Inside, it's all fairly powerful, with a quad-core Intel chip, plenty of memory and a graphics card that is just about enough for light gaming.

As with other AIOs, the XPS 27 has a hinge that lets you lower and adjust the screen, giving you a lot of flexibility. This 27-inch all-in-one has a 2,560 x 1,440 IPS display that looks very good, and features 10-point multi-touch as well, as with other AIOs.

It's a powerful machine too, with an Intel Core i7 quad-core chip inside that runs at 3.9GHz in Turbo mode, enough for quite demanding software such as Photoshop editing. There's a discrete GeForce GT 750M graphics card for light gaming use as well.

HP certainly deserves its reputation for thinking outside of the box. While the Z1 G2 is the only all-in-one that allows you to upgrade its internals, the Sprout has a truly unique design, with creativity and digital 3D design in mind.

Above the 23.5-inch display is a combined 2D and 3D camera, while below it there's an interactive 'touch mat' which acts like a giant trackpad, but with images projected onto it. You can place real objects onto this and scan them into HP's software, allowing them to be manipulated, exported and used in designs, as well as 3D printing.

The hardware comprises of an Intel Core i7-4790S with 8GB of memory, a GeForce GT 745A graphics card and a hybrid drive for storage.

It's not really a family computer or aimed at gamers like some of the all-in-ones we've suggested in this list, but it's such a cool idea, it deserves a mention.