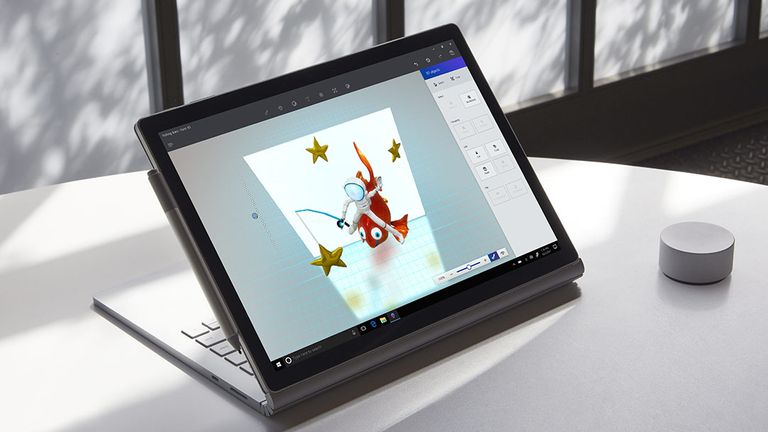 The best 2-in-1 laptops are the perfect solution for those yearning for something a little bit different from the traditional form-factor of most laptops – and have we got some excellent 2-in-1 laptop deals for you.

We've compiled a list of the very best 2-in-1 laptops – tablets that can double as laptops, and vice versa – which means you can make the most informed decision possible when it comes time for a purchase. From entry-level models to super-charged premium devices, we've got a 2-in-1 computer for you.

If you do happen to be in the market for a quality laptop-tablet hybrid, now's a fantastic time to be making an investment. Plenty of competition is driving prices down, and that means better specs and more features for your money – even if you're after the best 2-in-1 laptops under £500.

So which 2-in-1 laptop available right now in 2020 is the best? For us here at T3 the mighty Surface Book 2 remains the 2-in-1 to beat. It features in our best laptop guide as well, and for good reason. It's an absolute beast of a portable device that can do almost anything and it happens to be a 2-in-1.

However, whether you're looking for the best 2-in-1 laptop on a budget or something at the higher end of the market, like the Surface Book 2, we can help out with our carefully curated list. Read on for our picks, and check back often, because we're constantly refining the list.

How to choose the best 2-in-1 laptop for you

Convertibles, hybrids, 2-in-1s, call them what you like – these are essentially tablets that convert into laptops using keyboard attachments, and they occupy the middle ground between the two.

We're continuing to see some really decent quality hybrids hit the market in 2020, and whether you're looking for a lithe and luxurious 2-in-1 to take on the move, or are hunting down a convertible laptop to double up as a compact TV set, we've picked out the best options out there.

So how do you pick? It's a good idea to think about how you're going to be using your new computer, and thus how powerful it needs to be: that has a knock-on effect on price and portability. If you're going to be spending a lot of time typing, look for a 2-in-1 with a substantial keyboard attachment. If you're not, it doesn't matter so much.

The best 2-in-1 laptops available to buy today

The best 2-in-1 laptop in the world

No matter what you want to do, you can do it on the Surface Book 2, including playing the very latest and most demanding AAA PC games.

The only down side is that, despite the system costing a fortune and rocking a screen that is absolutely made for illustration, it doesn't come with a Microsoft Surface Pen – that'll cost you extra.

Regardless, the Surface Book 2 is by quite a way the best 2-in-1 laptop in the world in 2020, and if you can afford it then you should absolutely buy it.

A flexible, stylish and well-equipped 2-in-1 laptop

With it’s full 360-degree ErgoLift hinge and new, minimal-bezel design, the Zenbook Flip 13 might be the best laptop Asus have ever released. Befitting its namesake, the Flip 13 can be flipped between laptop, movie and tablet mode almost effortlessly, rated for at least 20,000 cycles. It feels solid and sturdy too, with a spun-metal finish available in three different colours. Our review model came in the Royal Blue variant, which looks fantastic with its rose-gold trim.

Tooled up with an 8th-gen Intel Core processor, this is average for a laptop, but powerful for a tablet. The tablet mode feels great to use, too, thanks to a responsive touchscreen and military-grade tested durable design. The only missing feature is a smart stylus, which would make using the tablet mode for artistic endeavours a bit easier, but there’s always the potential to buy a third-party pen.

We haven’t even delved into the brilliant audio quality courtesy of sound masters Harman Kardon, nor the well-designed keyboard that feels sturdy and comfortable to use. By far the coolest feature, however, is the integrated numpad. Hold down an invisible button on the corner of the trackpad, and concealed LED backlighting illuminates, transforming the trackpad into a full numpad, ready to tackle any and all calculations.

This is a very Surface-heavy list and for good reason: Microsoft's forays into the 2-in-1 market have been a huge success, revitalising the company's image as a serious hardware maker right when it needed it. For people who want to get in on this without paying handsomely, Microsoft has you covered with the Go.

The thing is, though, with even the base level version of the Surface Go coming with a full fat edition of Windows 10, you really can't do better for the money. Which when partnered with some rock solid internal hardware and a small but quality screen, makes it very hard to look past the Surface Go.

The only slight downside to this machine if you want to use it as a laptop then you'll need to buy the keyboard cover separately, setting you back an extra £125 – and then £100 if you want the pen. Bundle deals are available, though, so be sure to shop around.

In terms of bang for you buck, the best 2-in-1 laptop running Chrome OS

The Google Pixelbook, which can be found below, is the best 2-in-1 laptop running Chrome OS —  but that system retails for over three times what the Asus Chromebook Flip does. Which is why, if you are shopping for a 2-in-1, hybrid laptop with anything but a premium budget we recommend looking at the Flip first.

A sleek and stylish design contain rock solid internal hardware specs, while the Flip's 12.5-inch FHD 1,920 x 1,080 LED screen is really strong. Good viewing angles and an anti-glare coating mean that using the system while on the go, which is its raison d'être, is a pleasure.

Obviously, as a Chromebook, the system doesn't come running Windows 10 or macOS but rather ChromeOS, which is Google's zippy, online-focused operating system. It's a really strong ecosystem to work in providing you need the system for light to medium computing tasks, so if you need a system to use with Google's G Suite of office programs, as well as browsing the internet, writing emails and doing the odd bit of Disney Plus streaming, then it's ideal.

For the price it can't be beat as a 2-in-1 running ChromeOS; for even more premium hardware and build quality be sure to check out the Google Pixelbook below.

A stunning a versatile 2-in-1 option

Very appealing looks, superb specs... what's not to like about the Dell XPS 15 2-in-1? The price perhaps, as this is definitely up near the premium end of the scale, but if you can afford it then this is undoubtedly one of the best 2-in-1 laptops of 2020. The Dell XPS series has been impressing us for some time, and this model is no exception.

Be sure that you want that 15.6-inch screen though: it's great for movies, spreadsheets, games and everything else, but this laptop isn't as portable as some other models. That said, the chassis is pleasingly thin and light, and you'll have no problem using the computer in tablet or tent orientation.

A lightweight and beautiful 2-in-1 laptop for 2020

We've been hugely impressed with Yogas gone by, and it's therefore no surprise that the latest Lenovo Yoga C930 makes an appearance on our best 2-in-1s of 2020 list. Ultra-thin and ultra-light, it's a premium bit of kit.

From the generous 13.9-inch screen, to the top end i7 processor from Intel, to the roomy 512GB of SSD storage, there's so much to like here. It's not the cheapest of course, but that doesn't mean this isn't good value for money.

With a 4K resolution display, Dolby Atmos sound, and some rather sleek looks, we're struggling to think of anything to put in the negatives column. The keyboard folds over rather than detaching, but it's a minor niggle.

A convertible tablet that's cool in more ways than one

One of the cheaper options in this guide, Acer's Switch Alpha 12 is clearly influenced by Microsoft's Surface Pro 4, but its wireframe kickstand more closely echoes HP's Spectre x2.

It boasts a trick that neither of those devices can, though: liquid cooling. That's right, the Alpha 12 is the first tablet that pumps a coolant solution around the inside to keep it running cool and quiet. It's an innovative device that is offered at a surprisingly acceptable price, especially considering that its decent keyboard dock is included in the bundle.

Silver, shiny, tough and smart, the Switch Alpha 12 has more than a few tricks up its sleeve to earn its place on our best 2-in-1 laptops list.

Ever wondered what a Chromebook on steroids looks like? Then it's high-time you said hello to the Google Pixelbook. It's a 2-in-1 device that pushes the market to some of its furthest limits yet, with a vibrant 12.3 inch QHD display and a Intel Core i5 – i7 CPU/Intel HD Graphics 615 GPU combo providing impressive performance.

It's also a strikingly beautiful-looking device, but you're going to have cough up a fair amount of cash for riding the bleeding edge of convertible tech. Oh, and the relatively important Pixelbook Pen isn't included, so expect another outlay on top.

Even with the expense, it's still one of the best 2-in-1 laptops in the business in 2020 – and one that Google may well replace this year.

Knockout performance from a powerful 2-in-1

HP's latest iterative update to the Spectre x360 15 takes all the elements we loved about the 2018 version - namely its impressive performance and sleek design - and simply turns up the dial even more. The result is the HP Spectre x360 15T, with the base version boasting an 8th-gen Intel Core i7 CPU, Nvidia GeForce GTX 1050 Ti graphics and 8GB of RAM. For a 2-in-1, those are some seriously impressive specs.

The Spectre x360 15T will zip through any normal task - from word processing to video streaming - and is even powerful enough for a little light gaming here and there. That gorgeous 4K display does them all justice, making for an incredible portable viewing experience. The only real trade off is size. For a 2-in-1, the Spectre x360 15T is quite bulky so expert a workout if you're lugging it around all day.

One of the best 2-in-1 laptops keeps getting better

Microsoft has been setting the 2-in-1 pace for a while now with its Surface Pro series, and the Surface Pro 6 is the best yet – packed with power yet as thin and light as ever, and with some top-notch accessories too.

It's now available in matte black for that extra touch of class, if you need it, and with a range of configurations to pick from, you can even adapt it to suit your budget.

While the display is largely the same as it was on the previous Surface Pro, the Surface Pro 6 is up to two-thirds faster where it counts, according to Microsoft – so it's an obvious choice for our best 2-in-1 laptops of 2020 list.

The recently launched Samsung Galaxy Tab S6 certainly gives the Microsoft Surface Pro series a run for its money. If you think you'd rather have Android on your portable device than Windows, then this is an excellent hardware package to put it in – and the keyboard and S Pen stylus accessories are top notch too.

Of course Android can't fully match Windows when it comes to desktop mode, but it's getting better all the time (thanks in part to Microsoft's excellent Office apps for Android). In terms of specs and power, the Tab S6 doesn't disappoint, and it comes in grey, blue, and "rose blush".