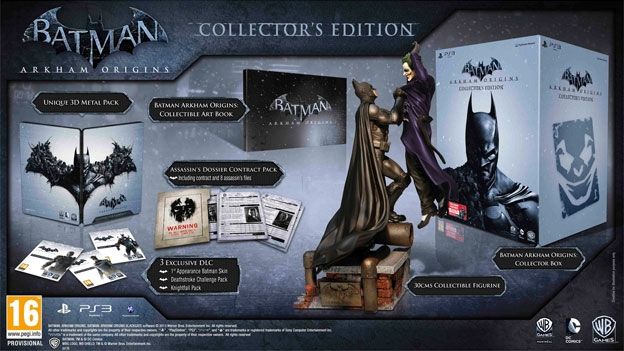 Batman: Arkham Origins Collector's Edition has been revealed and it will include a statue, an 80-page book and exclusive DLC for the PS3

We don't mind telling you that we're more than a little excited for the release of Batman: Arkham Origins.

Yes, we know it shares a lot in common with its predecessor - the combat, the movement, the snow-covered Gotham - but we're looking forward to a new adventure starring the caped crusader.

Warner Bros knows we probably aren't alone in that as evidenced by the fact they've just announced a Batman: Arkham Origins Collectors Edition for those Dark Knight fans willing to part with a little more cash on release day.

For £79 fans will get a highly detailed statue of Batman holding the Joker up in the air by his lapels, an 80 page hardback book containing art from the game and an 8 file Assassins Dossier. Naturally this will also include a copy of the game in a steel case.

Here's the kicker: if you own a PS3 you'll get hold of the Knightfall pack announced at E3 a couple of months ago. This includes a selection of maps that are tied in to the Knightfall story, an “early TV show skin” and an Azreal skin.