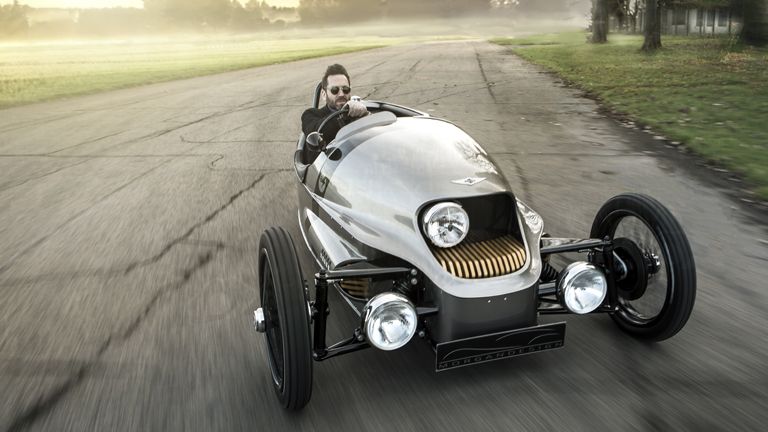 You may have always longed for a Ferrari to cruise through the city like Ferris Bueller, but there are much cooler and more unusual vehicles up for grabs – if you're a multi-millionaire at least. We have picked the most incredible submersibles, planes and cars designed to let you soar through the clouds and explore the deepest reaches of the oceans. Well it's nice to dream.

The ICON A5 aeroplane

James Bond can turn his hand to flying any aeroplane at the drop of a hat – and now you can too, if you have some cash to splash. Promising speed and exhilaration, the ICON A5 is a plane for beginners and it's said anyone can fly it with just 20 hours of lessons. It has a 100 horsepower engine, 11 metre wingspan and top speed of 109 mph. The two-seater single-engine prop plane, which has yet to go into production, resembles a jet ski with wings, but handles like a small sports plane and can take-off and land on water or land – making it ideal for flying from a Caribbean love nest to a secluded cove for a spot of snorkelling.

The A5 is the world's first Light Sport Aircraft with a spin-resistant airframe and has a parachute for emergencies to let the plane glide slowly to Earth if a new pilot loses control. Incredibly, its wings fold up so it can towed on a trailer behind a car and take just two minutes to unfurl – they even double as a sunbathing deck and diving platform if the plane is floating on the water. An easy way to be the most popular playboy at an exclusive resort.

The great white shark is one of the most formidably aerodynamic and powerful predators of the sea. Now you can rule the waves in a fierce yacht with streamlined body inspired by the beast. The 46-foot Shark Line yacht by Hyperlien is silver and black with teeth-shaped windows and a gill-inspired decoration down the side. But with a top speed of 43 knots it's more of a pleasure boat than a speedboat and couldn't outrun a great white. It works like any other speed boat, and is powered by two Volvo engines. The inside is a luxurious Tardis that the makes the two cabins feel much larger than they are and a large glass sunroof would let a lucky owner catch some rays and enjoy the fresh air while looking for a pretty harbour in which to moor up and eat some lobster.

If you are bored of catching Pokemon and want to see some real monsters, this personal sub could help. Intrepid mariners who have wondered what lurks a mile beneath their boats can now explore the depths in the luxurious Triton 6600/2. The deep diving vessel can launch from a yacht to take its pilot 2000m below the waves in air conditioned and humidity controlled comfort. They can look out from the optically perfect, acrylic bubble that forms the hull, controlling the sub with a joystick that moves four electrically powered thrusters to navigate the dark, spooky depths full of strange creatures. A Triton sub was used to shoot the first footage of a giant squid, and in case a pilot meets a monster, the submersibles is fitted with life support systems that last 96 hours – plenty of time to escape from terrifying tentacles.

Taking off and soaring over traffic is not just a day dream any more - flying cars are real and orders are being taken now. Petrol heads with licences for both planes and cars may want to put their name down for a PAL-V One. It's a three-wheeled gasoline powered car that on an airfield can transform into a gyroplane capable of flying over obstacles from traffic jams to mountain ranges at up to 97 knots. PAL-V's breakthrough is using tilting suspension to compensate for the high centre of gravity caused by the rotor on the roof. But unfortunately, taking off from the road is still only possible if you happen to live in the outback, so you'll have to find another way to beat rush hour on the M25.

If you find Ferraris too flashy and vintage motors too slow, classic car company Morgan has got you covered. Underneath its hand-crafted EV3's body, which looks as if it belongs in the 1930s, lies an electric engine. The beautiful three-wheeled motor can go from 0-62mph in less than 90 seconds and has a range of 150 miles - enough to comb the countryside for the perfect picnic spot. It's the first Morgan vehicle to use composite carbon panels, with the lightweight material allowing it to weigh just 500kg. The car also has hand worked aluminium panels over an ash frame. As any 1930s gent may expect, the vehicle has a luxurious interior with leather seats, sumptuous carpet and period brass dials in a lacquered dashboard. Taking inspiration from the decade's aero-engine race cars and classic motorcycles, it has a liquid-cooled 46kWh motor driving the rear wheel, while the present day is represented by a 20kWh lithium battery encased in the tubular space frame chassis.

Private jets may let you travel in style and luxury, but rich adrenaline junkies could soon soar through the sky like Marvel's Silver Surfer, using a 'WingBoard'. Engineers at Wyp Aviation have just put the V-shaped board through its paces in a wind tunnel, but their lofty ambition is for it to be towed by a plane, enabling a rider strapped to the board and holding the tow rope to perform death-defying tricks while 'surfing' the clouds. The WingBoard was originally a Kickstarter project but after three years work, the prototype has now notched up four hours of manned testing in an air runnel, letting the rider remain aloft in gusts of up to 75mph. It's sides are shaped like an aerofoil - a similar shape to a plane's wing - to generate lift and can be controlled and ridden like a wakeboard. The first flight will take place behind an aircraft in early 2017, if everything goes to plan, and rich daredevils could rent one for the price of a skydive.

If you have always fancied being in the army, but fear the discipline and danger, you can now buy your own personal tank to drive as a peacetime plaything. The Ripsaw EV2 was originally designed and built for the military as a high speed tank, setting the high-speed record for a light tank in the US Army, with a speed of 65mph, which is said to feel considerably faster. But now it's being produced as a luxury vehicle for those wanting something more intimidating than a Hummer. The four ton, 600 horsepower vehicle has two chunky treads and a cabin suspended over an exoskeleton made from steel and aluminium, with a Duramax turbodiesel V8 engine inside.

Said to be easy to drive thanks to a steering wheel instead of standard tank controls, the incredible vehicle is also designed to be comfortable and has 12 inches of suspension travel for a cushioned ride over rugged terrain, GPS for navigating off-road locations, external heat shields to keep things cool in the desert and even a leather interior with air conditioning. Each of the 18-foot long tanks is handmade and can be pimped to be faster or plusher.