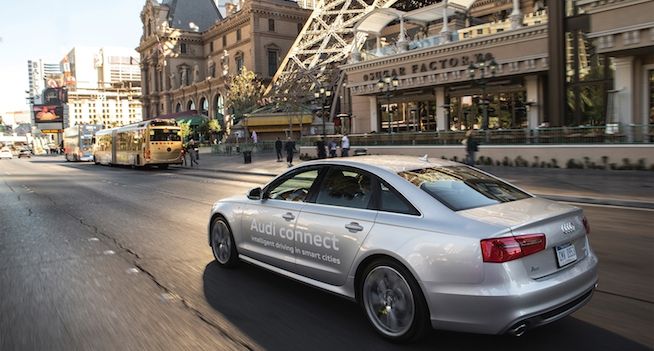 So, has Audi found a solution to traffic light hell? A way to turn our cities into no-red-light districts? Rory Buckeridge, a man who doesn't like to be kept waiting, scurried over to Berlin to find out.

It's probably a truism to suggest that there's something intrinsically less stressful about traffic lights when you're staring at them from behind the wheel of a factory fresh Audi. But we're in Berlin, sticking a pristine, white A3 into drive to get hands on with Audi's attempt to take the sting out of the commuter's bane, with their Online Traffic Light Information System.
Currently being trialled in Berlin, Verona and Las Vegas, Audi have hooked 700 of the German capital's 2,500 traffic lights to the networked system, which combines GPS with on-board wi-fi internet to link car, city and traffic light. Then, an onboard system tells the driver, via a simple graphic on the dash, the phase of the traffic light ahead.

Knowing that, the car can actively plan ahead. So if the light is going to be green, it'll suggest the optimum speed (usually around 30mph) to be able to breeze straight through. If it's going to be red, it'll tell you, so there's no need to approach it like an NCAP crash test, hoping a green's a millisecond away.
Once you've stopped at a red, if it'll change in under ten seconds, the car keeps the engine running, but if it's more than ten, it operates the engine stop/start system, restarting it five seconds before the light will phase back to green.

Audi claims that if implemented, this could reduce CO2 emissions by 15 per cent, and save 900 million litres of fuel in Germany alone. But it should also help with congestion, as you can squeeze on average an extra two cars through every light phase.
And you do find that this system genuinely changes the way you drive. Knowing that a light is going to stay red, you don't hoon up to it in the hopes you'll get lucky. And similarly, knowing it'll go green the moment you arrive means there's no hurry to get there.

But the best bit is the auto start. The engine rumbling back on becomes a physical cue you're about to ease away, so after a while you simply stop balefully starting at the light and just wait for the blip of the ignition, which melts away some serious red light stress.

Is this a tech that'll secure an Audi purchase? Probably not. Unless the fuel economy and congestion easing lead to a tax or insurance rebate. But does it put a smile on your face when you've bought one? Absolutely.