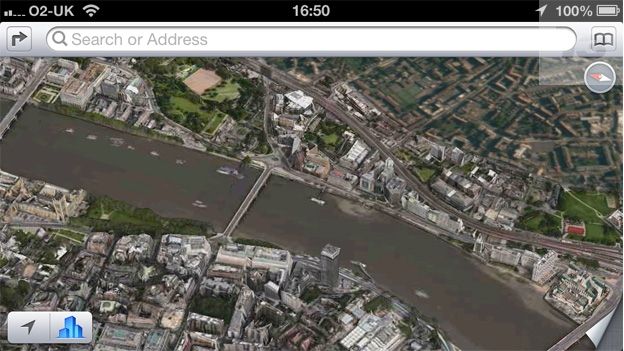 Apple rolls out its own mapping app, to less than enthusiastic reviews and user response

Apple launched its latest operating system yesterday – iOS 6 – and amongst a plethora of updates was the introduction of its own mapping service.

This replaces Google Maps on iDevices – so users are essentially forced to switch the app they use. Though you can still access Google Maps via a web browser.

The move can largely be put down to the ubiquitous feud between Apple and Google, but also the fact Android users have been privy to some nice updates for Google maps that iOS users have not.

However Apple Maps software has suffered something of a slamming in reviews across the globe, with complaints ranging from the software popping buildings in rivers, to placing Luton on the seaside.

The Independent put a lot of the problems down to out of date mapping data: “Much of Apple's map data is out of date, inaccurate, low resolution and incomplete. Some users have noticed towns and villages displayed up to a mile out of position. Some smaller roads and lanes do not even have road names and numbers here in the UK. It seems Apple's data is months, if not years out of date and only partially complete.”

The Telegraph added: “As it is, it's disappointing and makes it impossible to recommend Apple Maps for finding local services. Street navigation appears just fine, though Apple's Maps are still more sparsely populated than the Google Maps they replace. Schools, for instance, and parks often appear on Google but are empty white spaces on Apple Maps.”

The Guardian clocked some even odder geographical pehneomenon: Within minutes of the launch of the iOS6 operating system, which comes preloaded with Apple Maps, users were reporting that Paddington station had vanished, London had been relocated to Ontario, the Sears Tower in Chicago had shrunk, and Helsinki railway station had been turned into a park.

Meanwhile the BBC's Rory Rory Cellan-Jones ‏ tweeted: "Got to say this for Apple maps - it's made the idea of moving to Luton a lot more attractive http://pic.twitter.com/WkPsX1WL”

Across the pond, the verdicts were usually less scathing, but still less than complimentary: “Apple's database of points of interest (stores, restaurants, and so on), powered by Yelp, is sparser than Google's. There's no built-in public-transportation guidance. For big cities, you get Flyover, a super-cool 3-D photographic model of the actual buildings — but losing Google's Street View feature is a real shame.”

Meanwhile there has been a fair amount of negative user reaction, to say the least. Here are a selection of Tweets we received on the matter:

@WJFleming nowhere near as clean/fluid as google maps was. poor picture quality and the 3D is a bit gimmiky at the moment

@cn2409 my thoughts on apple maps. Good idea but major fail. No google streetview or bus times in my area.. FAIL.

@SteelerGoalie94 In a word. #crap I have put a google maps web app on my home screen.

@AJH_Worksupport indifferent. Live turn by turn. Not so sure about added poi's appearing over night. #needinganupdate

@TheEkasBarara Im from India. The maps are crap now for us. I really miss the Google Maps!

@LindsayBaines I did a route that is 2hrs 49 on Google maps, on the new iMaps it said 5hrs. :-o #notgreat

@owieh the gaps are terrible! The road where my workplace is have existed for about 9-10 years now and it's not showing on the new maps.

Some posts in the T3 Facebook page certainly bolster this sentiment, though not comprehensively:

Dean Webley: I used to be able to pick out my house on Google Maps....now my whole village is just a blur....Great effort Apple....So glad I still have a 3GS and not invested £529+ in an iPhone 5!

Richard Wilkinson: Well personally I find the new maps actually finds where I live much better than the old one that was several streets away, and the view I get in general is much cleaner and better, so I prefer it myself.

Martin Nike: It's rubbish. Things in the wrong place, things missing and laughable satellite data. Google must be pissing themselves with laughter at Apple's lousy replacement.

James Place: My home town is misnamed, my work town is misnamed and, using Maps to navigate to work it took me over two rivers according to the screen - however there aren't any rivers on my route! I also live in a black and white blur and searching for local towns comes up with 'no result found'... Cancelled my iPhone 5 pre-order... Would rather shell out for an android to get Maps back!

Sheldon Thomasson: Such a balls up. Places spelt wrong, missing or even not there. I agree Google must be laughing there arses off.