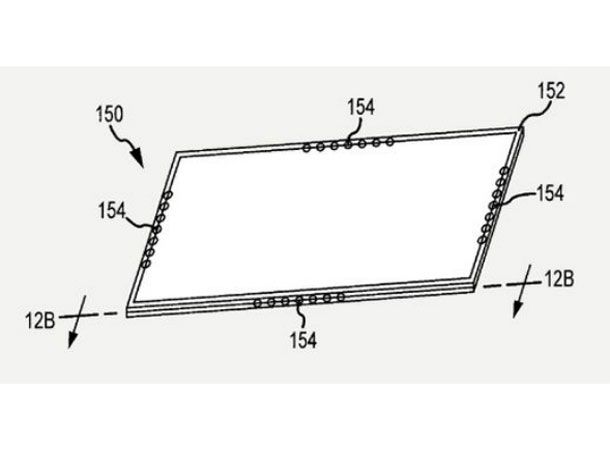 With the Apple iPad 2 expected to be unveiled in the coming weeks a new Apple patent has emerged showing the company's intentions to add a smart bezel to its future tablet devices.

Further increasing the iPad's touch-sensitive controls, the patented smart bezel would feature an integrated sensor to allow Apple tablet users to initiate specific commands and functions on the device simply by touching, tapping, holding and even squeezing the pressure responsive outer area.

Doing away with the current Home button and other physical controls found on the first-generation iPad, the patent details a few commands the smart bezel could be used for with a downward swipe to turn the gadget's volume down and an upward swipe to increase volume. Double tapping the bezel is also outlined as being used to wake the tablet from a sleeping state.

Whilst the emerging patent might be too late for the expected iPad 2, a device that is repeated to feature a Home button following the leak of a screen protector earlier today, we could well see future iterations of Apple's market leading tablet adopting a fleet of new gesture controls.

Would a smart bezel enhance user experience on the iPad of hamper controls through a lack of physical buttons? Share your thoughts via the T3 Twitter and Facebook feeds.