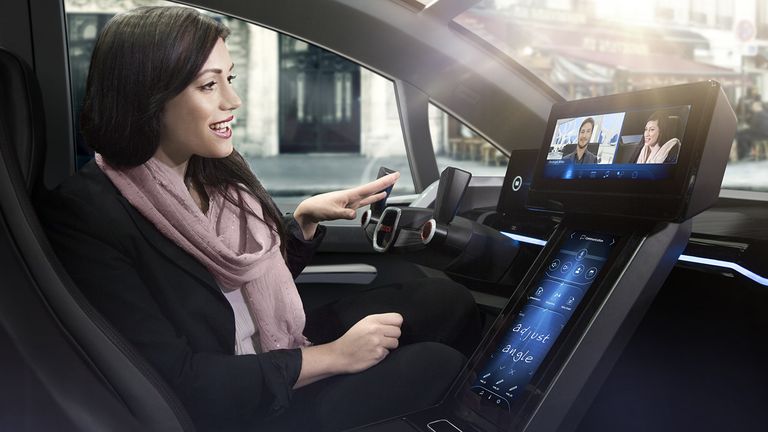 While phones get bigger screens and slightly faster processors, it's the automotive industry where the real changes are happening. From self-driving cars, to planet friendly electric drivetrains, it's where all of the most exciting, and potentially world changing developments are being made.

Bosch recently flew us out to it research and testing facility in Boxberg, Germany, to preview some of the latest innovations its been working on, destined for a car near you in the future.

Here are the eight coolest things we saw:

1. Handover between autonomous and driver mode

The first demonstration we experienced was a 15 minute driverless tour around Bosch's test track. In previous years, this would have been a demonstration on its own, but this year, Bosch showed off the switch-over experience between autonomous and non-autonomous modes.

This is pretty exciting, as it means the autonomous systems are ready, now companies are focusing on the finer details of semi-autonomous driving, like the user experience.

In Bosch's demo, the Tesla Model S (with Level 4 autonomy) would count down to when the driver needed to take over. When the driver is ready, they simply press two buttons on the steering wheel and take back control. It was a clear and intuitive system, colour us impressed.

If, for whatever reason, the driver didn't take control, the Tesla would pull over to the side of the road and stop in a lay-by.

2. A wireless charging BMW i3

One of the worst experiences of owning an electric car is charging it - and Bosch is trying to make it that little bit easier.

In one of the Boxberg workshops you'll find a BMW i3 suspended above a wireless charging pad. Soon, instead of needing to plug your electric vehicle in, you'll simply drive into your garage and the car will begin charging automatically.

And don't worry, it's pet friendly, just in case Mr Cuddles runs underneath the vehicle.

3. Sensors which actually stop you from hitting things

If you've got a reasonably new car, chances are it'll have some sensors in, which beep like crazy when you reverse close to something. The problem is, it's easy to ignore these beeps, and reverse into something regardless.

The next generation systems from Bosch will automatically apply the brakes at the very last moment, stopping any unfortunate fender benders.

These offer 360-degree protection, even preventing side impacts and braking for moving targets, if a child ran out behind your car, for example.

4. A vision for full autonomy

This was one of the more far-out concepts on show - that demonstrated what a driver could do while in autonomous driving mode. This included selecting music, obviously, as well as interacting with your smart home, preparing it for when you get home.

This one is great for safety, and absolutely necessary for a fully autonomous future. Vehicle-to-vehicle communication is essentially cars talking to each other, we experienced a demo where a motorcyclist approached us quickly from behind, something you could easily miss just by looking in your mirrors.

The screen in the car notified the driver of the overtaking motorbike. This has clear safety benefits in the sort term, and will be vital when cars become even more autonomous.

As electric bikes become more common, and potentially more powerful, it makes sense that the braking systems get more powerful as well.

CEO of Bosch eBike Systems, Claus Fleischer, explained that, “With front-wheel ABS, wheel speed sensors monitor the speed of both wheels. As soon as the front wheel threatens to lock up, for example in the event of a brake application which is too strong, the Bosch eBike ABS regulates the braking pressure and thus optimises the stability and manoeuvrability of the eBike.”

This works on any terrain, from greasy, wet city roads, to gravelly mountain trails. We tried it on tarmac covered in small rocks, and didn't break our necks, so it must work.

The system is being trialled on fleet bikes in Europe, before being made available to purchase in the the later half of 2018.

7. Electric transportation for the masses

Electric cars are great, but they're also pretty expensive, Bosch has partnered with e.GO Mobile to bring affordable eMobility to the streets.

We had a little test drive in an early prototype compact electric car, called the e.GO Life. This vehicle will cost around €15,900 (around £14,000), and run of Bosch's 48V Central Drive System.

There are two models, one with a 14.4 kWh capacity battery and the other with 19.2 kWh capacity. The ranges are 80mph and 110mph respectively, both with a top speed of 62mph.

Not only has Bosch provided the drive system, it'll also assist with the multimedia system and after sales service.

It's really exciting to see electric vehicles start to come down in price.

8. Cars which know you're going to crash before you do

One of the more unpleasant demonstrations at the facility was a simulated crash, once with preconditioning, and once without.

The car with pre-conditioning could tense the seat belts and even (potentially, in the future) move the seat into the ideal crash position.

The difference between to two simulated crashes was quite dramatic, with a lot more head flopping around (for want of a better phrase) without pre-conditioning.