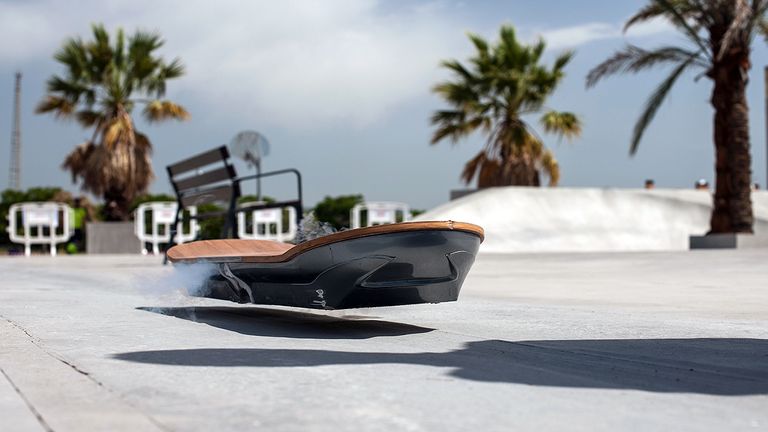 For anyone who lived through the 1980s, the notion of riding a hover board is up there in the Premier League of science fiction pipe dreams alongside hitching a ride in an X-Wing and racing a Tron Light Cycle. Well, I just rode one.

Marty McFly and his fetching orange body warmer made piloting the futuristic, friction-free skateboard look so effortlessly cool in 1989 that every kid demanded to have a go on one. But we've had to wait years for anything resembling a real hover board to surface.

Last year saw Hendo's bulky contraption steal a few column inches when Tony Hawk demonstrated how he could flail around on the awkward magnetic contraption and a bespoke half pipe, but little has arrived to really excite sci-fi fans. Until now.

When we saw Lexus' teaser video, apparently portraying a stylish board levitating above a skate park somewhere in sunny Spain, T3 booked the first flight to Barcelona to find out what the hell was going on.

The clip above sees British pro skater Ross McGouran majestically gliding around a skate park on what looks like a real-life hover board. But all isn't quite as it seems...

There is the potential to trample all over many childhood dreams here, so I'm going to tread carefully. This isn't a real hover board - even Henry Alex Rubin, the film's creative driving force, has described the whole stunt as a “magic trick”. But before you run off to sob in a darkened room, I must add that it is most definitely the next best thing.

Certainly, the board levitates but it is restricted to a track of very powerful, very expensive magnets that are hidden beneath a thin plywood skate park, which has been painted to look like concrete.

So, it might be a good idea to park those thoughts of breezing to work aboard you very own McFly machine now.

But let's not take anything away from the engineering genius here, because it is genius, and the skills of pro skater Ross are second to none.

Is it hard to ride?

Hell yes. In fact, it's almost impossible to get the hang of it. Ross McGouran gave me a few pointers in Barcelona, namely to keep both feet pointing forward, which is a very unnatural board stance, and to go as fast as possible to remain stable.

In reality, the edges of the board continuously clipped the skate park floor, as I struggled to muster the core strength to keep it level.

The board felt like it was balancing on an invisible piece of pipe, and I had to really work to ensure its edges - or 'rails' if you're talking boarder-ese - didn't scrape the plywood floor. The main way to combat this was to go faster, which meant literally running and jumping on the thing to get it going.

The only problem is, this typically led to very sore knees and ankles as I inevitably lost balance and went crashing along the skate park. There was a bit of a threat of the friction-free hover board slamming into my man parts along the way. That'd make Doc Brown say, "Great Scott!"

I managed to experience a few fleeting seconds of friction-free hovering when one of the engineers gave me a hefty shove while I stood on the board. I kept my knees bent, centre of gravity low and eyes on the horizon but sure enough, the rails caught on the floor and I fell off.

It takes an incredible amount of bravery and balance to ride the thing properly. One of Lexus' guys revealed that even a few of the pro skaters they tested it on simply couldn't get along with it. So maybe my efforts weren't so terrible.

"It's like nothing I've ever ridden before," explains Ross as he hobbles around on a recently busted ankle, obtained during the filming process.

"There's no resistance, so the thing really flies when you get it going but as you can see, it's really easy to clip a rail and come off badly."

Ross manages to make the whole thing look very easy and he even pushed the production team to try ever more insane stunts. "The scientists told me I could never make it jump," he says with a wry smile.

"The magnetic force is really strong, so making it break free from the hidden track to get air meant I had to go at the jump with stupid amounts of speed. I made it, but landing wasn't easy."

Dr. Oliver de Haas is the brains behind the board. His company Evico has over ten years of experience in magnetic levitation technology. The firm typically creates machinery that is used in the automotive manufacturing process, but this project was slightly different.

"This is much cooler than anything we normally do," he says, as his team busy themselves with a hover board that is billowing steam in the background.

"The hover board itself features a Type 2 semiconductor," he explains. "We place the hover board on a piece of magnetic rail that's identical to the stuff on the track, then we pour liquid nitrogen into the board.

"The liquid nitrogen freezes the magnetic fields produced by the track into the semiconductor, which is made from yttrium, barium, copper and other natural elements, and this is how it hovers above the track."

So yes, it's all very complex. The bottom line is, the board doesn't require any electricity, just a good supply of liquid nitrogen to keep everything sufficiently cool that the semiconductor locks onto the magnetic rails. Result: the board flows without resistance, giving a fast, frictionless ride along the purpose-built park.

Is this the future of board sports?

That would be great, but hover boarding isn't going to - ho ho - 'take off' in the near future. The tech is far too expensive and the safety implications of hanging around magnets and riding a 15kg board that literally won't stop aren't very public liability insurance-friendly. One engineer told me the magnetic tracks are constantly fighting to attract, meaning the plywood boards must be expertly fitted. Otherwise, they can prise up and crush a human with 7.5 tonnes of magnetic force. Gnarly.

Dr. Oliver de Haas says his team learnt a great deal from the project and that his technology will continue to be used in manufacturing processes. But anyone still harbouring dreams of hover board commutes might want to put them on ice for now. Or we could all club together to tear up pavements and replace them with plywood-covered super-magnets. Who's with me?

Check out: Best fitness tracker: 8 top fitness bands to get you in shape