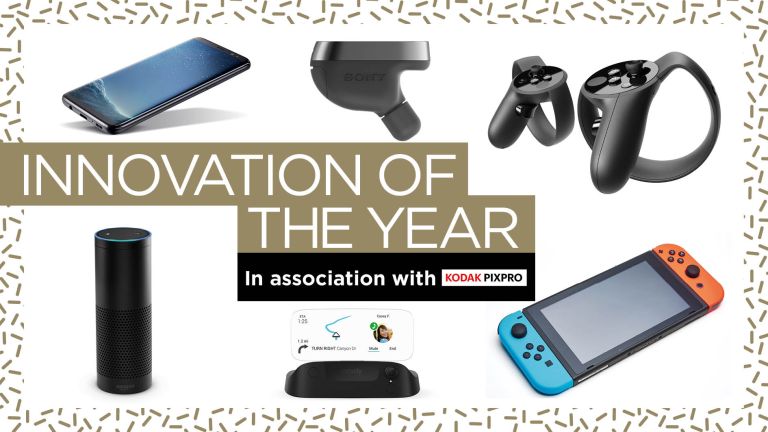 Welcome to our nominees list for Innvovation of the Year in association with Kodak Pixpro.

From groundbreaking smartphone screen tech, to amazing advances in gaming and VR devices, and onto revolutionary navigation and entertainment systems, this category features the most cutting edge and even experimental technology to have been released over the past year.

The T3 Awards, or the Oscars of Tech, as many call them – are now in their 11th year, and bigger than ever but this category, which features the year's most avant-garde tech, has been going ever since Awards Year 1.

Samsung's gorgeous Infinity Edge Display technology has really made its recent flagship smartphones stand out. The Galaxy S8's 5.8-inch Quad HD + 2960 x 1440 Gorilla Glass 5 display, for example, not only delivers 570ppi but also a completely bezel-less experience thanks to it.

Far from a gimmick, the Infinity Edge Tech enhances mobile devices both aesthetically and ergonomically like no other tech right now and, simply put, has brought a breath of fresh air to the staid world of mobiles.

When it launched, Oculus was saddled with a Microsoft Xbox controller that was, shall we say, not quite right for VR gaming and experiences.

The innovative Oculus Touch rectifies that at a stroke. Not only do these handhelds add motion-sensing control with more buttons than you can shake your finger at, but also a second motion-sensing camera, so Oculus Rift can now see in 3D. This means that for the first time ever with Oculus Rift you can now map a play area to move around in.

Throw in the fact that the Touch controllers are incredibly well made and intuitive to use, and you're suddenly dealing with a mainstream VR game changer – every advantage that HTC's Vive originally had over Oculus has been swept away.

Apple does what it does best here with the Touch Bar, tweak an established technology, crank up the style and then redeploy it as part of a super-desirable new product.

Additional shortcuts are just the beginning of its usefulness, with a wealth of additional information and options made available across a plethora of apps which, due to its physical separation on the MacBook, ensure that the main screen remains uncluttered - ideal for creatives and potentially gamers, too.

The editing functionality is also just superbly streamlined and functional, making it easier than ever to knock together cool videos or edit images with your fingers alone. Innovative and super slick.

Alexa's reliable voice control and wide range of applications – or 'Skills' – make Echo great for everything from checking the weather to controlling your smart lighting.

Before Alexa, the worst element of the supposedly 'connected' home was that products from rival brands all required their own apps. Now, Alexa is uniting them.

The Navdy heads-up display, which beams data right into your view as your drive, has seemingly done the HUD right.

It’s supremely slick, projecting a clear, colourful display packed with useful driving data onto your windscreen, and when you add up all its capabilities you realise just how invaluable it is; and that once you start using it, you won’t be able to do without it – especially if you drive lots of miles.

Navdy makes driving safer, more enjoyable and, most important of all for our purposes, more innovative than ever.

When reviewing the Nintendo Switch earlier in 2017, T3's Robert Jones hailed it as, "An innovative, stylish and fun video game console that takes the best parts from the Wii, Wii U and Nintendo 3DS and combines them into a system that is greater than the sum of its parts."

By combining the best parts of the home console and the portable handheld, Nintendo has pulled off an innovative coup and regained its crown as the King of Commercially Successful Fun.

A personal assistant that sits in your ear, Xperia Ear provides you with info such as your schedule, weather and the latest news to keep you up-to-date on the go.

A glimpse of things to come, this soft silicone ear-bud is designed for continuous wear, with IPX2 moisture protection and an all-day battery life – its case doubles as a charger, so you can simply pop it in when you need to recharge.

On the following key categories you got to vote - now closed:  Gadget Of The Year, Brand Of The Year, Retailer Of The Year and Phone of the Year.

More on the T3 Awards 2017 together with Three