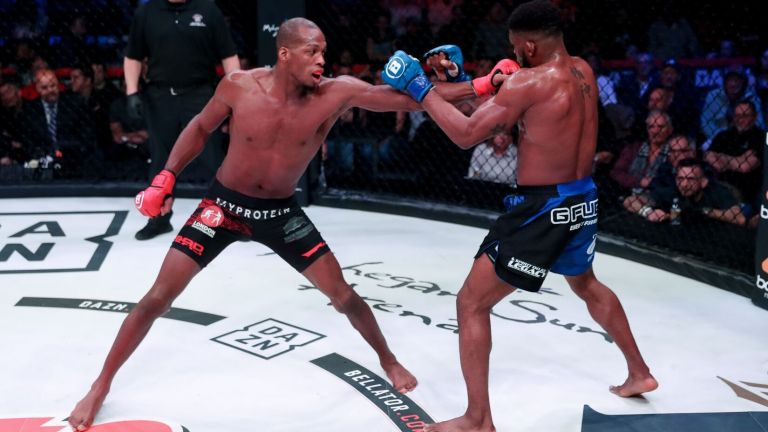 Doing MMA fighter weight training is only half the win. As much as resistance training is probably the best way to lose weight fast, you also want follow a diet and cardio plan if you wanted to see results fast and would like to keep the excess pounds off your body after you lost them.

MMA star Michael 'Venom' Page is not only famous for his explosive finishers, he is also well known for his slender yet muscular physique. He needed to be in good shape too for the Dublin Bellator fight he was promoting when we spoke to him, and his advice can help you get fit too.

Apart from following the below guidelines, you might want to consider getting a decent running watch. These aren't just for running, they help you track just about any fitness activity and analyse it in far more depth than even the best Fitbit. It's like having access to a personal trainer every day, but a less intimidatingly fit one, that goes on your wrist.

What does a typical MMA cardio workout session look like?

"Cardio sessions aren’t about time, it’s about the pace that you’re actually sustaining while doing your cardio session" - mentioned Michael - "We tend to keep to a very competitive pace on each machine. So, if we’re doing a cardio session on the vertical climber we will spend five minutes on the machine and we have to hit a certain speed. The vertical climber is a machine that rock climbers use a lot and we try to beat their scores".

MVP's target on the vertical climber is 200 climbs a minute, meaning you'll need to do 1000 climbs in five minutes. That's an excellent way to build cardio strength plus strengthen your glutes, the biggest muscle in your body.

What do MMA fighters eat and how do they diet to stay agile and strong?

Each individual's diet can be very different, MMA fighters cut back on carbs not long before an event to shed any excess they might have. "You should still have carbs in the morning" - says MVP - "Your diet also depends on what we’re doing throughout the week".

MVP further clarifies his particular method: "If I know I’m going to have a hard-sparring session I can’t go with less carbs, so I need to increase how many I’m consuming. The following day you just have to adjust your diet to make up for the calories burned in the previous day’s session".

"My last meals of the day are also very small. It will usually be a salad with asparagus because it takes water out of your system. I also don’t eat after 8 or 9 pm. I won’t have anything again later until the morning".

Breakfast
Some scrambled egg with bread and that would be his carbs for the day. He has to cut that out when he gets closer to the fight. Alternatively, he might have some oats with Greek yoghurt and a little bit of honey.

Lunch
He usually has two lunches a day and would tend to eat salmon and broccoli or kale and something similar later in the day. However, he may swap the salmon for chicken and swap out broccoli for a salad, but essentially the same thing.

Dinner
He doesn’t have anything too crazy for dinner and he never eats anything after 8 or 9 pm.

Do you need to take any supplements?

"I have BCAA’s during and after training sessions and then I have one protein powder shake in between my second and third meal. If it’s a longer day, I have a protein shake in between sessions depending on when I’m training" - explains MVP.

If you are also following Michael 'Venom' Page's weight training plan too, you can also consider taking some creatine as well as protein.