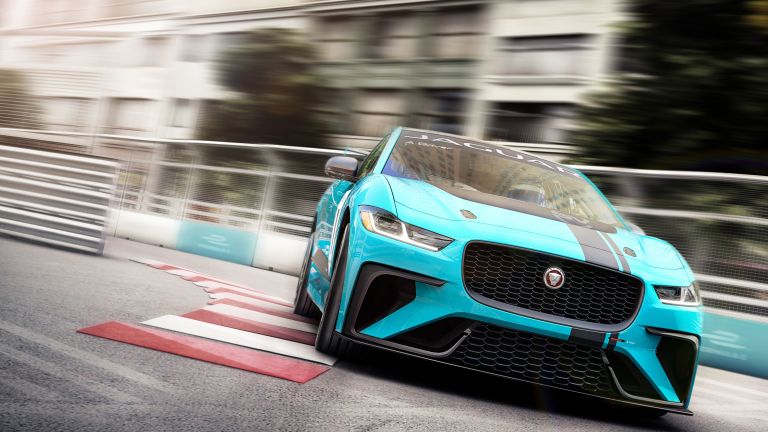 Thrillseekers are going to love a new initiative from Panasonic Jaguar Racing. Not only is the team back for another bash at the Formula E championship in 2018, but the company has also launched the world’s first championship for production-based electric cars called the Jaguar I-PACE eTrophy.

Unsurprisingly, the featured car will be the I-PACE, an innovative five-seat battery electric sports car, which is being built by Jaguar Land Rover Special Vehicle Operations. And, early reports suggest that it’ll go every bit as good as it looks. In addition, for up to 20 drivers at each of the ten race series, there’s going to be an ‘Arrive and Drive’ package that allows people to turn up with their crash helmet and join the grid themselves.

The Jaguar I-PACE eTrophy will be the support series for the 2018 FIA Formula E Championship, and will commence late next year when the production version of the I-PACE is also unveiled. With races taking place in the likes of Hong Kong, Paris, Sao Paolo and New York, the concept is being seen as a valuable opportunity to develop Jaguar’s ongoing commitment to electrification in its production vehicles.

Panasonic Jaguar Racing has a trio of drivers now in place too, with Nelson Piquet Jr. joining Mitch Evans and Ho-Pin Tung to boost the ranks of its Formula E team. Meanwhile, central to all this is the new Formula E car itself, the Jaguar I-TYPE 2, which was recently unveiled at Jaguar’s design centre in Coventry.

Arguably, the ‘Arrive and Drive’ idea that’s the most tantalising aspect of the forthcoming season, although it’s likely to come with a premium price tag if you’re aiming to bag a seat in one of the cars come race day. “We’ve had to look very carefully at the logistics of doing something like this,” says Marion Barnaby, Championship Manager for the new Jaguar I-PACE eTrophy. “It’s a very complex thing running these electric race cars, but you’ll turn up and your car will be ready to race inside the garage. We’ll have all the engineers, mechanics… all you’ll need to bring is yourself, your crash helmet and your boots and gloves. And your sponsor!”

Marion is fizzing with excitement about what the series will offer the lucky few who get to take part. “These are going to be sprint races, so that’s 30 minutes with 20 cars going flat out around these incredible circuits in all these amazing cities. There hasn’t been anything like this on this scale before, and that’s mainly because we’re doing all of this in-house and from the ground up at Jaguar.”

While there’s still a long way to go in terms of developing the car, it seems they’ve even got to piece together the rules and regulations of a series that’s still evolving too. “There’s going to be a real sense of achievement once we get to the first race,” Marion adds. “We’re quite a long way ahead, and we’re obviously working closely with the FIA, because this hasn’t been done before. We’re writing the technical regulations in conjunction with them and there’s certainly a learning curve involved for everybody. This is a world first; to do a production car for a one-make series is incredible.”

Craig Wilson, Panasonic Jaguar Racing Race Director, sounds similarly fired up by the Formula E/ I-PACE eTrophy package deal that’s taking shape. “These are really exciting times,” he says. “It was very challenging for us last season because we weren’t able to secure entry into the competition until much later than we would have liked. So we had a very short period of time to develop a new powertrain, plus we had no prior information to work with.”

“This season we have had more time, and we’ve also had half a season’s worth of data to analyse and work out where those deficiencies are. The major thing we identified last year was that we had a car where its weight distribution wasn’t as good as we would have liked. So we struggled in certain places, with certain corners and tracks. We couldn’t match the other teams with our basic energy efficiency. It’s a very competitive formula, so you don’t need to be out by much for it to make a really big difference.”

“They’re really quite different,” says Craig of the connection, if any, between Formula E and Formula 1. “Formula 1 is 70% aerodynamics. These cars are largely fixed, you’ve got some small tuning members, but otherwise it is fixed aerodynamics. And that is really the intention, so that it can be about powertrain development.“

Craig also seems in no doubt that Formula E is as much about the tech as it is about the driving. “This definitely pushes the boundaries in software development and evolution,” he says. “There’s a lot more intellect required in this formula from a driver perspective, much more so than in a Formula 1 car. Obviously we’re on street circuits, so we don’t have the same speeds and we’re also on a treaded tyre constantly too. The link there is really to try and have it more connected to a road car.”

Craig underlines that the overall concept with Formula E is to promote electric urban mobility. So there’s a lot more synergy, like the 18-inch wheel rim and more of a road tyre setup that’s in evidence. “It’s all about helping to promote that whole electrification of vehicles in urban locations thing. There’s a lot more connection in Formula E to production electric vehicles than there is in Formula 1 to anything in conventional production.”

Being behind the wheel of an electric race car brings with it a different set of challenges too. “In one respect, it’s quite simple to drive,” reckons Craig. “But to drive it at speed is challenging. There is a lot of work that needs to go into the energy recovery, the whole regenerative aspect of the car. That’s where it starts to get very challenging for both the teams and the drivers. It’s all about driving quickly but saving energy. That doesn’t always sit well with a lot of drivers because they’ve been so used to driving with their foot to the floor.”

“The battery mass is the largest single piece of the equation,” adds Craig. “Which doesn’t really compare to a Formula 1 car. We’ve got a car here today that comes in at about 880 or 890 kilograms, while a Formula 1 car would be around 650 or 700. That’s quite a big difference.”

Jaguar says that technical specifications, race calendar and costs for the Jaguar I-PACE eTROPHY will be released in 2018, but they anticipate that demand will be high. Places will be awarded on a first come, first served basis from entrants and drivers holding the relevant international race licence.