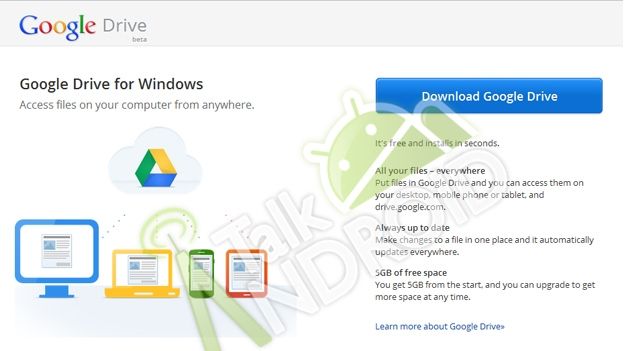 Google Drive is now official and its primed to take on Dropbox, iCloud, Skydrive and the rest of the cloud-based storage bunch. Here's all you need to know about Google Drive

After leaking last week, Google Drive has finally rolled out and is ready to take on services such as DropBox and Apple iCloud. There's been no word on a Google Drive UK release date as yet, but as our friends in the US get used to packing their content in the cloud, we look at the five most essential things you need to know when it does land.

Google Drive is very much a rebranding of Google Docs (now built into Drive), which allows users to create documents and other files that can be saved, shared and edited over “the cloud”. The only difference now is that users now have at least 5GB of storage to play with. There's a range of compatible platforms, letting users upload, download and access files from multiple devices. Android, Windows and OS X platforms have their own dedicated apps, with an iOS app apparently on its way, so iPhone and iPad users can get in on the action too. So far, however, there's no official Windows Phone but that might have something to do with the existence of Skydrive. Finally, Google Drive may also give Google+ a much-needed boost, as sending files between Google+ and other social network services is made to be as seamless as possible.

Google states that its cloud storage system is an "open platform", meaning it can integrate with various third-party collaboration services, although it appears this support is only for web apps via the Chrome Web Store. Still, the Store already holds 18 web apps offering Google Drive integration, with more certainly on the way. Aviary Photo Editor, for example, lets users open stored images in a new window, edit them, and store them back on the server alongside previous iterations. Google has made the Software Development Kit available for those wanting to build their own apps, and we can already see the availability of applications becoming one of the key selling points of Google Drive.

The search functionality built into Google Drive is probably the feature that sets it aside from competitors. Using the desktop apps available for both Mac and Windows, users can easily sort through files by name, type, owner and other. Most impressively, Drive uses Optical Character Recognition technology to search for words within scanned items. So, for example, a user could find an old newspaper cutting by searching for words within the text. It also uses a new image recognition technology which lets users locate photographs by entering key terms (such as 'Grand Canyon'), though Google states this technology is “still in its early stages”.

Users get 5GB of space completely free, with more room available for those willing to pony up some cash. US Tariffs are, however, pretty reasonable, with 25GB costing $2.49 (£1.54) a month, 100GB costing $4.99 (£3.96) a month and 1TB costs $49.99 (£31) a month. There's no word yet as to whether the UK pricing will equate to the US tariffs, but we can expect to find out in the coming weeks. As for file sizes, there's a limit on anything over 10GB, but this remains far more generous than Drive's competitors.

Google Drive's strength lies is in it seamless integration across platforms. Microsoft fleshed out its own online storage system, SkyDrive, earlier this week, launching a series of new apps. SkyDrive's 7GB of free storage does trump Google's, as do the cheaper tariffs and use of 'fetch' (a feature that allows the user to access files on a home computer so long as it's switched on), but Drive's flexibility may prove more appealing to those working across different operating systems. Apple's iCloud also works nicely across separate devices, but it's solely designed for Apple systems and only certain types of files can be stored. For many, however, Dropbox still reigns supreme as Google's biggest competitor, mainly for its simplistic interface. Can Google Drive offers a comparable service to finally dethrone Dropbox? Watch this space.