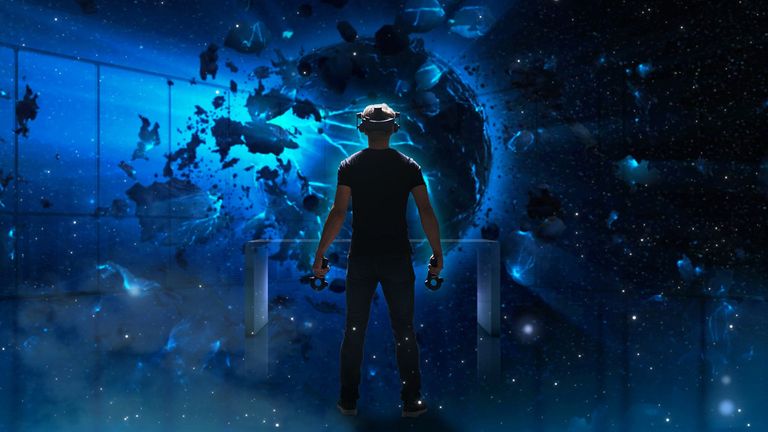 It's only really in the last couple of years that consumer technology has really been troubled by the terms augmented reality (AR) and virtual reality (VR), but now it seems they're everywhere – at trade shows, on our consoles, and built into our smartphones.

Just in case you find yourself a little bewildered by your choices, we're here to lay everything out plainly for you, from Microsoft to Apple and from premium to budget. Once you know what you're talking about, you'll know the kind of tech you want to buy next.

Virtual reality: what is VR?

Virtual reality is an artificial reality created by a computer for you – as time has gone on, gadgets have got better at making this VR seem real, or at least getting it to shift in time with the movements of your head without causing you to throw up.

The key difference from AR is that VR is a completely enclosed, completely virtual world. Headsets like the Oculus Rift and the HTC Vive set new standards for graphics quality and the sense of immersion you can get in virtual reality, though problems remain – not least how you move through a VR world when you're stuck in your bedroom, and how you interact with objects that aren't actually there.

Nevertheless, it's a new golden age for VR, with better visuals, better audio, and better games and apps than ever before. It may not have hit the mainstream yet like Oculus and HTC would have hoped, but it's undoubtedly got a big role to play in the future of tech.

It's not just for games either: VR lets you watch Netflix on a screen 100 feet high, for example, or create digital paintings and sculptures in three dimensions rather than just two. We've also seen different kinds of experiments with movies in VR, though it'll be some time before you can actually walk through a scene of Star Wars.

VR on your phone, console and computer

That's the tech explained – how do you get yourself a slice of the virtual action? The aforementioned top tier headsets from Oculus and HTC offer the best VR experiences: the best graphics, the best games, the most complete experiences. However, they're also the most expensive option, and you'll need a decently specced Windows PC to run them from.

Then there's the console option, which for the time being is just the PlayStation VR headset. This is a small step down from the PC headsets, with slightly less graphics power at a slightly lower price. If you've already got a PS4 at home, then it's one of the easiest ways to join the VR revolution, and there's a decent number of games to pick from.

On the bottom rung are the VR headsets powered by phones – the games aren't as impressive, just like mobile games in general can't match top-tier PC titles, but you don't have to spend much, and there's no wiring to trip you up. The mobile VR scene was begun by the Samsung Gear VR, which was followed by the Daydream View, but now a number of headsets are starting to appear that include all the necessary components inside the device, so you can keep your phone in your pocket.

Augmented reality: what is AR?

Augmented reality (AR) is a mix of the real world and the virtual world, which is why it's sometimes called mixed reality or MR (MR is often used to refer to a more advanced and immersive type of AR). To begin with, AR was just graphics overlaid on your view of the world, like pop-ups in Google Glass, but it's now become much more sophisticated.

That sophistication means AR visuals can now look as if they're really part of the scene in front of you, whether it's a 3D model of Minecraft on your coffee table or a robot enemy crashing through the wall of your apartment.

All of these calculations and projections means a lot of hard work on the part of whatever device you're using AR with, but the tech has now progressed far enough that you can get AR on your phone (see below).

Augmented reality has a whole host of potential applications that go outside the realm of virtual reality: think being able to see a car made to your spec on your actual driveway, or a surgeon being able to see a map of the brain overlaid on a patient's skull, or viewing a huge virtual television screen that's fixed to your actual kitchen wall.

AR on your phone, console and computer

Augmented reality has arrived on the iPhone and iPad in the form of the ARKit suite of developer tools, meaning you can see an AR world through your phone's camera in an increasing number of apps (so you could see a table from Ikea in your own living room, for example). Android is late joining the party but now has ARCore for app developers to take advantage of too.

At the other end of the spectrum are the high-powered AR headsets like Microsoft's HoloLens or the Magic Leap One, gear that's just as advanced (and as expensive) as the top-end VR headsets. Even though these gadgets aren't having to generate entirely virtual worlds, they're still having to process a host of incoming data and work out how to place digital graphics so your eyes get fooled into thinking they're real.

Microsoft is keen on the mixed reality label and has worked with a number of hardware partners to produce headsets like the HMD Odyssey from Samsung – these headsets blend a bit of both VR and AR and aim to offer lower prices and lower minimum specs (for the connected computers) than the high-end headsets.