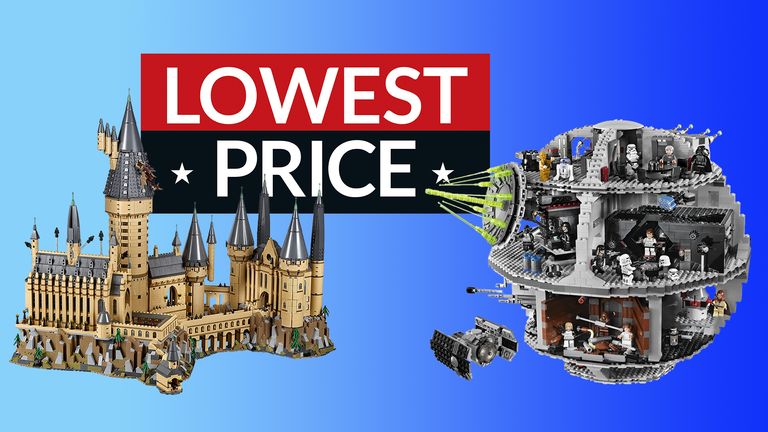 Lego makes some astoundingly cool sets that, to be frank, cost a lot of money. They're incredibly cool, and often take a long time to build, so they actually give decent value for money in terms of entertainment (and then you get to enjoy the finished product), but it's still a whole bunch to outlay at once… but it's a bit less right now, thanks to some amazing Black Friday Lego deals.

The stand-outs here are the Lego Death Star, which is an incredible playset with a dozen different scenes from the movies; the Lego Hogwarts Castle, which is a scale recreation of the movie version of the castle and is one of T3's favourite sets ever; and the Lego Ultimate Collector's Series Millennium Falcon, which is the biggest Lego set ever made, and probably takes the crown as the single coolest set of all time.

But there are more brilliantly big sets on offer, including from the Lego Technic and Lego Creator Expert series – see them all below.

Lego Star Wars Death Star | Save £100 | Now £309.99 at Smyths Toys
This is one of the favourite creations of the Lego's Creative Director for its Star Wars sets, and it's easy to see why. You'll build all the famous Death Star scenes from the original trilogy, and play in them with a whopping 23 minifigures. Built from over 4,000 pieces, it's a classic and clever design.View Deal

Lego Harry Potter Hogwarts Castle | Save £87 | Now 262.99 at Smyths Toys
Grab this highly detailed Lego Harry Potter collectible set that mirrors the movie version of the iconic castle. It's made from over 6,000 pieces, with towers, turrets, chambers, classrooms, creatures, the Whomping Willow and Hagrid´s hut and a host more features. It's made to microfigure scale (which are very tiny Lego figures), and comes with 27 of them to dot around the place. It's incredible.View Deal

Lego Star Wars Ultimate Collector Series Millennium Falcon | Save £101 | Now £548.67 at John Lewis
There are over 7,500 pieces and four classic crew minifigures (Han Solo, Chewbacca, Princess Leia and C-3PO), plus new trilogy figures. in this Star Wars Lego set. It’s one of the largest, most detailed Lego models ever created, because it's built to scale with the minifigs – you can open up sections to see accurate versions of the interior, holo-chess table and all.View Deal

Lego Technic Porsche 911 RSR | Save £41 | Now £98.99
Being a Technic model, this is just crammed with detail, from the realistic six-cylinder Boxer engine with moving pistons to the working steering, to the little details in the cockpit (including map of Laguna Seca), to the overall look at lighting design. At 1,580 pieces, it's great for car-loving kids to dive into, or Porsche-loving adults.View Deal

Lego Disney Frozen 2 Arendelle Castle | Save £13 | Now £54.99
Look, we probably don't need to sell you on the desirability of Frozen 2 and Lego in combination. This three-floor castle is modular, so you can take it apart to play with individual rooms, then put it back together at the end. It comes with Elsa, Anna, Kristoff and bunch of extra accessories and mini buildings.View Deal

Lego Creator Taj Mahal | Save £80 | Now £199.99 at John Lewis
Previously the biggest Lego set of all time (surpassed by the Ultimate Collector's Edition Millennium Falcon), this was retired and then brought back thanks to high demand. The 5,900-piece build is absolutely epic, creating a build that is stunningly detailed and satisfying to put together. This is a proper project, and feels so worth the investment.View Deal

Lego Creator Roller Coaster | Save £75 | Now £224.99 at John Lewis
Another huge set that's tons of fun to put together, this 4,124-piece build creates a working roller coaster, with 11 minifigures to ride its two trains. It's a pretty brilliant design – it actually includes a chain to pull the cars up the hill straight, bumpers to move it along the curve at the top, then gravity does the rest. You move the chain and bumpers by turning a crank at the front, but you can also install a Lego motor to make the whole thing run itself automatically (sold separately). It includes a load of great details around the entrance and base of the coaster, too.View Deal