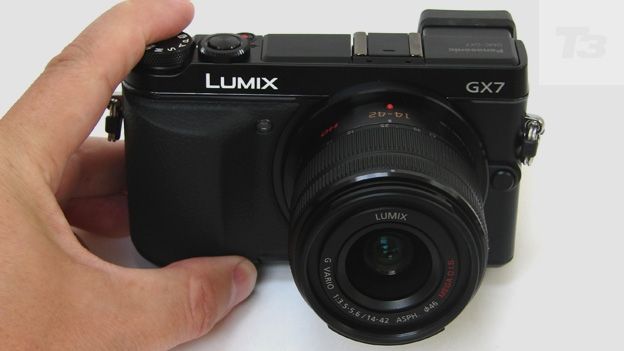 The Panasonic Lumix GX7 is a new premium G-series camera with a price tag just short of a grand. Is this truly a DSLR in compact clothing?

Panasonic, along with development partner Olympus, pioneered the interchangeable lens digital camera. But since 2008/2009 it's been rather overshadowed by what others have done with the format: namely Canon, Samsung, Sony and Fujifilm with their large APS-C sized sensors that made the Micro Four Thirds chips in Panasonic's own G series models look a tad weedy.

Can the electronics giant's serious-looking new Panasonic GX7, complete with 16-megapixel CMOS sensor and ever-expanding line up of miniature lenses, win back some ground?

First impressions are good for anyone looking for a premium class of camera, either for replacing 2012's Panasonic GX1, which spearheaded a new (upper) class of Panasonic compacts, or adding to an existing DSLR set up.

For the GX7 arrives boasting the world-first of a built-in electronic viewfinder that can be tilted 90°, so photographers can shoot either looking directly down into the viewfinder as on a medium format camera, or at eye level.

OK, so Panasonic's accessory viewfinders that clip onto a vacant hotshoe have always managed this feat - but fair enough, those came at extra cost and weren't part of the body itself.

The GX7 is also blockier in appearance than recent Panasonic G-series releases, which its maker is classifying as being more retro styled. It's not quite as pretty as the recent Olympus Pen E-P5 in terms of classic looks, but then that camera doesn't have a viewfinder built in.

As we might expect, the GX7 comes with a touch screen monitor, and this very usefully can be tilted. Though it's not quite flexible enough to allow the screen to be flipped so it faces the subject in front of your lens for self-portraits, the fact that it can be angled up or down - and this comes in addition to the EVF as described - is a bonus for otherwise trickier compositions.

As expected Wi-Fi, is included this time around also, one of the backplate function buttons activating this feature.

Alternatively there's a 20mm compact lens kit for £999. While that may sound costly, again it compares similarly with its rivals as listed above on launch. But inevitably the question is, is such an expense worth it?

The more squared off, boxy design of the GX7 appears to have a practical as well as aesthetic reason - chiefly because both the electronic viewfinder and pop-up flash have been sunk into its top plate, with a covered hotshoe for accessory attachment shoehorned in between.

Over at the right hand edge - if viewing the camera from the back - Panasonic has still found room for an 11-option mode dial running the full gamut of manual and auto settings, plus no fewer than three custom options. Keeping things ergonomic, this is surrounded by a power lever, while a command dial encircles the shutter release button instead. Set just behind this is red video record button.

Despite the provision of a touch screen then, the GX7 is feature-packed enough to satisfy those who like spinning dials and pulling levers, too. There's a lot to play with.

At the back we also get as full a complement of buttons as we'd expect to find on any regular premium compact, with no less than four user-attributable function buttons alongside a more familiar four-way control pad and Panasonic's time-saving Quick Menu button, which provides key features at a glance on screen.

As with a DSLR we can further lock auto focus and exposure, switch between auto and manual focusing with the flick of a surrounding lever, and also switch on the flash and viewfinder.

The latter feels a touch superfluous as the camera offers eye sensor activation as well - but you couldn't accuse Panasonic of missing anything out here. We even get a dedicated button for ISO, which is welcome.

If we've a gripe it's that both the back plate buttons are very small - possibly because there's a fair amount of them - as are the virtual buttons on screen.

But overall, the GX7 handles like a fair compromise between functionality and portability, with larger screens and controls inevitably adding to bulk. It also feels very solid when held in the palm, thanks to a magnesium alloy die cast construction.

Two methods of composing your shot via the EVF - shooting at eye level, or tilting the viewfinder through 90° so it points skyward - plus countless more via the tilting back plate LCD make this an ideal tool for the creatively minded.

The resolution of each is also extremely high - making the larger screen in particular a knock out for composition. This offers a 1,040K-dot resolution while the alternative of the EVF boasts a whopping 2,760K. OK, so some traditionalists may prefer an optical viewfinder, but still, there's very little to complain about here.

It's also possible to call up enough technical gubbins on screen - such as spirit level and exposure-levels indicators - that we soon had the back of the camera resembling a flight simulator.

Unlike many digital cameras these days that take the smartphone route of charging the battery in camera, Panasonic has provided a proper standalone charger with the GX7, so the camera isn't tied up every time power needs replenishing.

Depending on which compatible battery you're using with the GX7, Panasonic claims a performance of between 320 and 340 shots, which is up there with the best of the competition as far as a compact system camera is concerned, though again is no match for the 900+ images that would be otherwise delivered by a bulkier DSLR in this price bracket.

The GX7 arrives promising lightning swift auto focus thanks to contrast detection technology, and, unusually for the Panasonic range, anti shake built into the body rather than being supplied via the attached lens.

Both of those are good news, meaning we were able to concentrate on subject matter when shooting without wondering whether the camera could cope - which it did, admirably.

We were fortunate to be shooting under clear blue skies in the middle of an English summer and the results we got even with the bog standard 14-42mm manually adjusted zoom, were superb.

Of course, these are the conditions in which Panasonic cameras with their bias towards delivering well-saturated and punchy colours at the best of times, traditionally excel.

Video at 1,920 x 1,080 pixels also looks great and the manual zoom is silent in operation as is the auto focus, quickly adjusting as you zoom in or out. We get stereo sound too, as you'd expect at this price.

The 16 megapixel Panasonic Lumix DMC-GX7 arguably packs in all that anyone would want from a premium level system camera - apart from an APS-C sized sensor.

So if you're hankering after one of those for closest to DSLR quality without actually being a DSLR, then look elsewhere. What you get in return though is portability courtesy of smaller and lighter lenses such as the standard 14-42 manually operated zoom with our review sample.

Yes it looks expensive unless you're directly comparing it with rivals, but weighing up the inherent restrictions and advantages of the Micro Four Thirds format, we'd be so bold as to say that the GX7 is the best G-series compact camera Panasonic has produced to date. Narrowly missing out on a coveted fifth star, it's a veritable G-whizz.