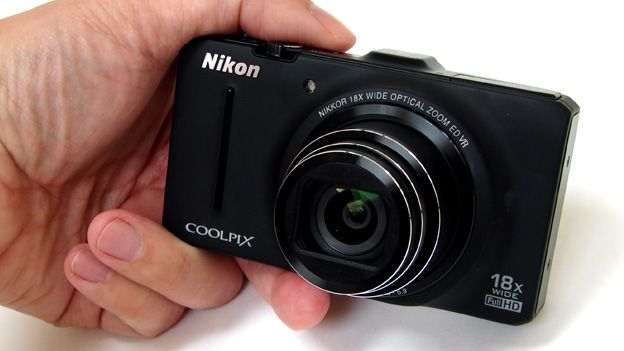 While healthy competition in the travel zoom compact sector means one can be picked up for a street price around £200, a lot of candidates at similar prices doesn't make for a straightforward buying decision. For those looking for a strong, sophisticated build as well as all-encompassing feature set however, the Swiss Army knife-like Nikon Coolpix S9300 is an enticing contender.

With a reasonable suggested asking price of £299.99, the 18x optical zoom Nikon is pitted directly against the Canon PowerShot SX260 HS (which has a 20x zoom), as well as the Olympus SZ-31MR (24x zoom), plus the pricier Panasonic Lumix DMC-TZ30 and and Sony HX20V respectively.

The Nikon's focal range is equivalent to a wide 25-450mm on a 35mm film camera and supported by lens shift stabilisation to prevent hand wobble blurring shots at maximum zoom.

Featuring the same physical size 1/2.3-inch CMOS sensor as its rivals, here offering up a 16 megapixel effective resolution it's not the smallest or most compact travel zoom but it does look the part.

Nikon provides an almost flat fascia so the camera will readily slip into a back pocket, yet a tactile rubber coating to the surface at the front plus thumb pad at the back. We found this combo enabled a firm one-handed hold when shooting at the furthest reach of the zoom, which is important.

The Nikon Coolpix S9300's broader than average rectangular dimensions find room for an eight-option shooting mode dial, which is always welcome as it saves having to drill down into menu screens. Revealing the camera's intended audience, this biases fully automatic rather than manual operation.

There's also a pop-up flash neatly sunken into the top plate, which when erect is sufficiently clear of the lens to avoid red eye or stray fingers in front, plus stereo microphones flanking either side of the raised hump housing the integral GPS antenna. This tags image data with location coordinates.

Though this camera majors on auto stills operation with red video record button falling readily under the thumb, some creativity has been provided via limited effects modes, as also found on Nikon's consumer DSLRs.

Toggle the zoom lever that encircles the main shutter release meanwhile and a low mechanical buzz the S9300 powers through its entire focal range in just less than three seconds.

The lens is supported by optical image stabilisation to prevent blurred shots resulting from hand wobble when shooting at the telephoto end of the zoom or in lower light, aiding performance in conditions which prompt the camera to use a slower shutter speed. If we've a grumble it's that we found the scroll wheel at the back to be a tad too 'slippy', making it awkward to be precise with function selections.

Though the Nikon offers 1920x1080 pixels Full HD video, the 3-inch LCD retains the standard squarish 4:3 aspect ratio, a higher than expected (for a point and shoot) 921k-dot resolution providing a clear view. As expected there's no additional optical or electronic viewfinder, so the fixed, non-touch screen rear plate LCD handles the duties of both shot composition and review.

A mains plug and USB lead are supplied in the box in lieu of a standalone charger, meaning the S9300's battery is charged in-camera.

Battery life isn't much better than rivals including the Canon SX260 HS however at just 200 shots, which is hardly something to write home about, especially when further rivals in the Panasonic TZ30 and Sony HX20V offer 260 shots and 320 images respectively from their own provided cells.

As a default, pictures straight from the Coolpix S9300 are, um, a little cool in tone (no pun intended), especially compared to the punchy colours delivered by the likes of the Sony Cyber-shot HX20V or Panasonic TZ30, which seems well suited to the travel medium.

Though we noticed some shots were soft at maximum telephoto and colours are typically a little muted, video looks good, with detail clearly defined, while operational buzz picked up by the stereo microphones is minimal.

All said and done the 'auto everything' 16 megapixel, 18x Coolpix S9300 comes across as a lot of camera for an affordable price if a big zoom with a broad 25-450mm focal range yet pocket sized dimensions are your chief concern.

We prefer the colourful look of JPEG format shots straight from the Panasonic TZ30 or Sony HX20V however in a straight choice between the three models, and if you can bear to spend £50 more, and the Nikon's battery life could be improved.

However body integral GPS furthers the appeal of the S9300 as a travel companion for photographers wanting a capable all in one, construction complete with pop-up flash is classy, the finish sophisticated, and style and usability have been metered out in equal measure.