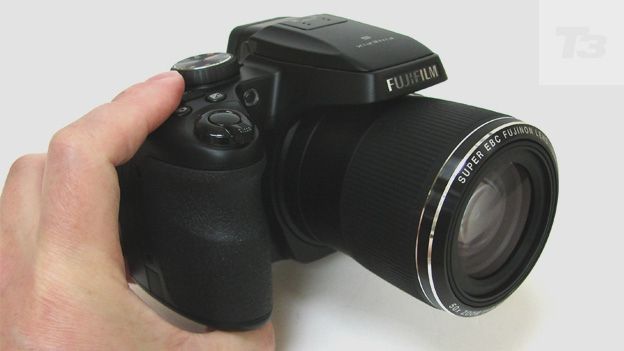 Has Fuji managed to achieve an affordable cam with compromise with its whopping 50x zoom bridge model? Read our Fujifilm FinePixS9200 review

Frustrated by the limitations of your smartphone's miniscule lens and aching for one camera with enough reach to allow you to photograph or video pretty much anything, without the need for additional optics?

Then a super zoom camera might be the one for you and you're in luck because there's a new range of budget priced offerings available from Fujifilm.

The cheapest of the bunch - the DSLR-styled 50x optical zoom Fujifilm S9200, goes up against the likes of the new Sony H400, a 63x zoom behemoth.

Like its rival, the Fuji features an eye level viewfinder but has slightly less 'poke' in the zoom department. Both additionally offer 3-inch backplate LCDs, pop up flash, stereo microphones and retail for what on the face of it appears a very fair £249.99, so it's really down to how well they perform.

The fact that the Sony offers 20 megapixels of resolution from a 1/2.3-inch sensor as opposed to Fuji's 16MP from the same sized chip may not necessarily prove that the odds are stacked in Sony's favour. Experience tells us that a small sensor crowded with pixels often doesn't translate as providing the most noiseless, grain-free results.

Also in the new lineup, is the Fujifilm S9400W – identical to the S9200 except for the fact that that it adds built-in Wi-Fi – plus the Fujifilm S1, which adds Wi-Fi, higher resolution screen/s and enthusiast features such as weather-proofing and an accessory shoe.

But at their heart, both of the S9200's siblings are likewise 16 megapixel 1/2.3-inch sensor models with 50x zooms apiece.

As you'd expect of a camera that shares just about every feature apart from wireless connectivity, place the S9200 and S9400W cameras from Fuji side by side and you'd be hard pressed to tell them apart, save for the Wi-Fi insignia on the latter's pop-up flash.

Being too large to fit in a pocket, the S9200 once again features an array of controls that fall between what we'd expect to see on a point and shoot pocket snapper and the fully blown digital SLR it resembles.

To help hold the camera steady towards the end of the telephoto zoom range, we get both a large rubberised handgrip, which is a boon for a budget priced model, plus a rubbed edged surround to the lens, which enables a firm two handed grip. Ideally we'd be using a tripod too, but that option isn't always practical.

The S9200's shutter release button sits where we'd expect to find one on a DSLR – over the handgrip. This button is encircled by a lever for adjusting the zoom; the same set up we'd expect to find on a compact camera, plus there's a secondary lever on the barrel of the lens itself, do that you can adjust via the left hand instead of the right.

As with the S9400W, distance markings reveal themselves on the tube-like barrel as the lens extends outward from its protective housing, which is a nice touch.

The bottle top style shooting mode dial has the same array of fully automatic plus manual options as we found on the S9400W and S1 models, so even though this camera is £130 less than that top model, not every corner has been cut to achieve its price point.

With the latter mode in play, the S9200 itself selects which presets seem to best match the scenes the user is attempting to shoot.

With buttons and wheels automatically falling beneath forefinger or thumb, the S9200 is very easy to use and shouldn't challenge anyone stepping up from an older 3x or 5x zoom snapshot, or looking for an alternative to their smartphone camera.

As we'd expect given that this costs a similar amount to a standard snapshot – albeit one of the better ones – we don't get a tilt and swivel LCD this time around, as found on the more expensive S1 alternative.

Instead the S9200 provides a 3-inch screen offering 460,000 dots of resolution that is resolutely fixed in place.

An alternative to viewing the larger screen is using the smaller 0.2-inch electronic viewfinder (EVF) Fuji has thoughtfully provided directly above it. But this is both physically small and offers a lower resolution of 200k dots, so is only really there in an emergency should sunshine render the main screen tricky to view.

Plus we found that our nose automatically smudged up against the bigger LCD when using the EVF. there's also no eye sensor to automatically help the camera switch between EVF and LCD. Instead a dedicated button for swapping from one to the other is provided.

However, the EVF still a nice touch that we wouldn't expect to find on a camera this inexpensive.

Historically, lower priced digital cameras always used to reveal they were a budget option by including a handful of alkaline AA batteries in the box rather than the more preferred lithium ion rechargeable variety.

And so it is that the S9200 betrays its own cheap-y status. That said, it's a welcome touch for Fuji to include a set of AAs that, unlike most rechargeables, were 'ready to go' as soon we un-boxed this super zoom.

The alkaline batteries don't appear to fair any worse in terms of performance than the rechargeable cells provided with most bridge models either.

We're getting what we're paying for with the S9200. Which is to say that this is a DSLR-styled camera with a small 1/2.3-inch sensor at its core, which is the standard issue chip for most cheap point and shoot cameras.

So, in other words, we can't expect the more professional results that the S9200's outward styling may suggest we're in for. What we're really getting here is a much, much wider range of compositional options, thanks to that stonking lens bolted on the front – but that's about it.

It also goes without saying that taking sharply focused shots towards the extremities of the zoom range provided is more of a challenge than shooting wide. Yet it can be done. Colours are also vibrant, without being unrealistically rendered.

As with its S1 and S9400W brethren, naturally sharply focused images are less essential or subject to scrutiny when shooting video and thankfully here the full extent of the optical zoom can be deployed too.

Stereo microphones, a built-in wind filter option, and the ability to apply digital filter effects to video as well as stills are further options we didn't automatically expect to find on a bridge model this inexpensive.

Focus can be weighted to what's in the centre of the frame or set to continuous whereby – unless we have zoomed in too near at too close a distance – it swiftly adjusts if we swap subject or alter the framing.

Those looking for a slightly more sophisticated camera than their mobile offers and with a greatly expanded (optical) zoom range will find the 16 megapixel S9200 worth a look, especially at its no quibble £250 asking price.

That said you might also want to weigh the camera up next to the identially priced 63x optical zoom Sony H40.

Ideally you'll also want to budget for a tripod of sorts, even if it's just an inexpensive Gorillapod-style affair, as though a chunky handgrip and supportive lens surround are provided, the slightest movement at maximum zoom will introduce blur. This is less of an issue outdoors in bright light than indoors. If you're not expecting miracles, this is one of the better cheaper options out there.