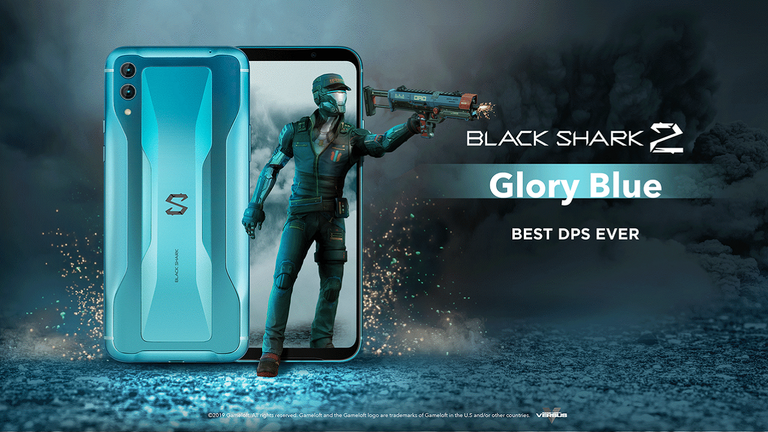 The Black Shark 2 is an incredibly powerful phone with a beefy battery at an amazingly low price point.

There are a ton of smartphones out there, all of which can handle the occasional gaming session just fine, but if you're looking for a handset that can hold its own and go for hours, without rinsing your bank account, the Black Shark 2 is it.

Xiaomi has built on the foundations it laid with the Black Shark, and this second iteration sees a host of improvements and upgrades that make it even more gamer-friendly than its predecessor.

The Black Shark 2 launched in the Chinese market earlier this year, and while it's not widely available at the usual retailers here in the UK, you can buy it on the official Black Shark website in Glory Blue, Shadow Black, and Frozen Silver. There are two variants to choose from; an 8GB/ 128GB and 12GB/ 256GB priced at £479 and £559 respectively.

You might find the odd handset on eBay but the best – and practically only – place to peruse all of the available options is going to be the Black Shark site.

When it comes to form factor, the Black Shark 2 is rather ostentatious and there's no mistaking it for anything other than a device geared towards gaming. The handset is predominantly anodised metal with a glass frame on the rear holding a raised metal panel bearing the series' jagged 'S' logo that wouldn't look out of place on a gaming chair.

In fact, that 'racing' aesthetic dominates the design and the addition of customisable RGB lighting in strips along the sides, as well as the illumination of the 'S' logo makes for the finishing touch.

It's relatively unassuming from the front, so if you can find a case to cover the back, it'll just look like a very large, nondescript smartphone, but if your gamer credentials are ever called into question, you can just whip it out of the case to show them the (RGB) light.

Because of the size of the handset, it feels pretty substantial, which isn't a bad thing for something verging on a gaming handheld. The screen boasts a snazzy feature dubbed Master Touch which recognises varying pressure on the screen, and the display is further optimised with HDR support, as well as SDR to HDR conversion.

A notable feature is that Xiaomi opted for a 6.39 inch AMOLED screen rather than LCD, with a 60Hz refresh rate. It's not as bright as the Razer Phone 2's LCD display, and doesn't match the 90Hz refresh rate of the Asus ROG Phone's AMOLED panel, but at this price point, you'll be hard pressed to complain.

Powered by Qualcomm's Snapdragon 855 chipset, and available in 8GB/128GB and 12GB/256GB variants, the Black Shark 2 is going to breeze through the vast majority of tasks and will keep up its performance even when you're settling in for a session on a power hungry game.

The 4000mAh battery can go for days – quite literally – with 'normal' usage, but holds up for hours-long sessions of gaming or binge-watching on Netflix. The Ludicrous Mode – compare to a car's 'Sport Mode' – will prioritise your CPU's power to support the game you're playing without frame rate loss, and the X-type smart antenna, bolstered by two side antennas, really helps to create a strong and stable internet connection.

In a benchmark test, the Black Shark 2 doesn't shirk off, with an overall score of 5,747 in 3DMark’s Sling Shot Extreme – higher than the ROG Phone and Razer Phone 2.

Coupled with the Ludicrous Mode, the Black Shark 2 really is a veritable beast.

Depending on where your priorities and preferences lie, you might find yourself overlooking the Black Shark 2 in favour of an LCD screen, or a higher refresh rate, but you'd be doing yourself a disservice.

The new and improved features in the second offering in the Black Shark series offers a generously proportioned screen, unbelievably long battery life, and a fun aesthetic that doubles down on – and embraces – the purpose of this phone. It's a gaming smartphone through and through, and if that's not what you're after, you'll still reap the benefits when it comes to media content, and generally not having to worry if you forgot to plug your phone in to charge the night before.

Xiaomi's second stab at a gaming phone has really has managed to hit the sweet spot between outstanding performance, a lovely-looking display, and a fantastically low price, and if you can get over a couple of potential bugbears in the form of the AMOLED panel and lower refresh rate, it's an absolute bargain for gamers, and verges on a must-buy for everyone else, if they can get past the somewhat aggressive design.