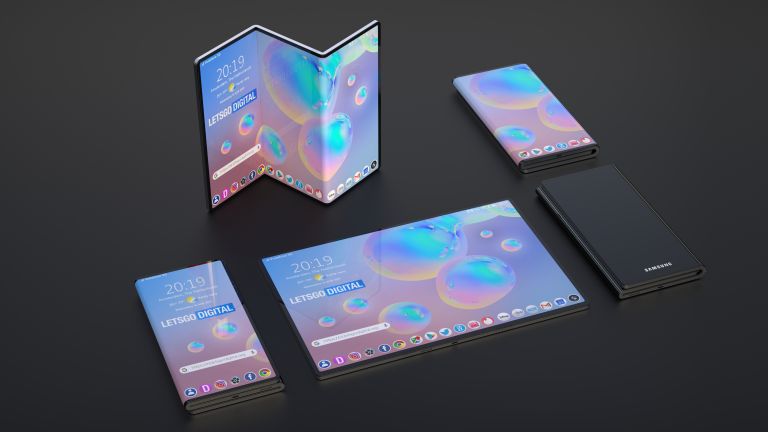 Samsung still hasn't brought its first folding smartphone – the Galaxy Fold – to market, but the Seoul-based company already has some ambitious plans for its next-generation flexible handsets. Illustrations filed alongside a new patent from the company reveal just how ambitious those plans really are.

Dutch technology blog LetsGoDigital has created high-resolution renders of the handset described in the patent. Dubbed Z-Fold, the smartphone folds in two places – so that from above it appears like the letter "Z", hence the name.

Samsung filed the patent with the Korean Intellectual Property Office, known as KIPO, at the end of last year. Although the official documentation was approved at the end of May, it took until earlier this month before the certification body published the patent – and its illustrations online. So, Samsung has clearly working on this design alongside the single-fold seen on the Galaxy Fold.

Like the latter, this pliable design will allow smartphone owners to choose how much screen real estate to use at any given time. So, you can unfurl one side of the display if you want to have two emails running side-by-side on the display while working. Or, you can unfurl everything to watch a movie or play a blockbuster video game.

If you want the phone to occupy the smallest possible physical footprint, it's possible to fold both sides of the screen backwards, so they're tucked behind the middle portion of the Infinity Flex AMOLED display.

Interestingly, while this is just a patent, rival smartphone manufacturer Xiaomi already has a working prototype with exactly the same dual-fold design.

Of course, multi-national technology companies like Samsung will often patent designs and technologies that never appear in consumer products. So, it's worth taking all this with a pinch of salt. Then again, Samsung is widely rumoured to be working on a slew of new folding designs for its portfolio – it's perfectly possible this will be one of a number of variants hitting store shelves in the coming months.