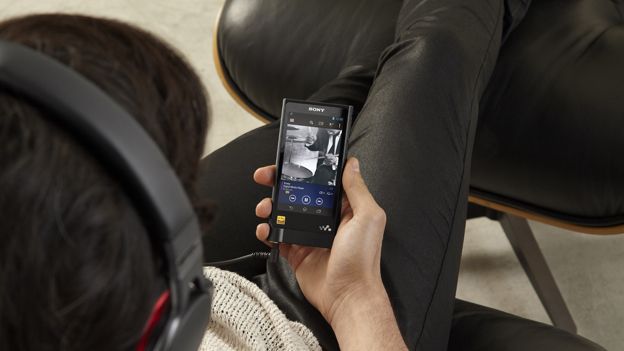 Digital music recorded at a higher sampling frequency and bit depth than CD can be considered high deﬁ nition, but no hard and fast standard has yet been set.

24-bit/ 192kHz are the numbers you most often see associated with high-resolution downloads, and these denote the bit depth and sampling frequency. 96kHz is also popular because it still trumps CD's 16-bit/441kHz.

There's also a confusing list of high-res ﬁ le formats to choose from, and few players can read them all. The usual suspects are:

But remember, not every one of these formats is necessarily high-resolution. If you rip a CD to FLAC, for example, it will still be CD quality. It just takes up a lot more memory. So when shopping for highresolution tracks, you'll need to ﬁ nd some assurance that they were created from the studio master.

Take your high-res music with you wherever you go.

Sony's ﬁ rst real foray into portable high-res audio is a beast of a player. Running on Android with a four-inch screen, the player has 128GB of storage and will play for approximately 33 hours on a single charge.

The mack daddy of audiophile-grade portable players, A&K has released the AK JR, a more affordable device with a 3.1-inch screen and 64GB of on-board storage. It's also tiny, being 6.9mm thin.

Pono is ageing rock star Neil Young's venture, and it's the quirkiest-looking high-res device out there. Underneath its yellow, Toblerone-esque exterior, you'll ﬁ nd 64GB of storage and support for most formats.

This Chinese player isn't going to win any awards for its looks, or its screen for that matter, but it sounds the part – thanks to dual ES9018K2M DACs – and is a relatively cheap way to experience the thrills of high-res.