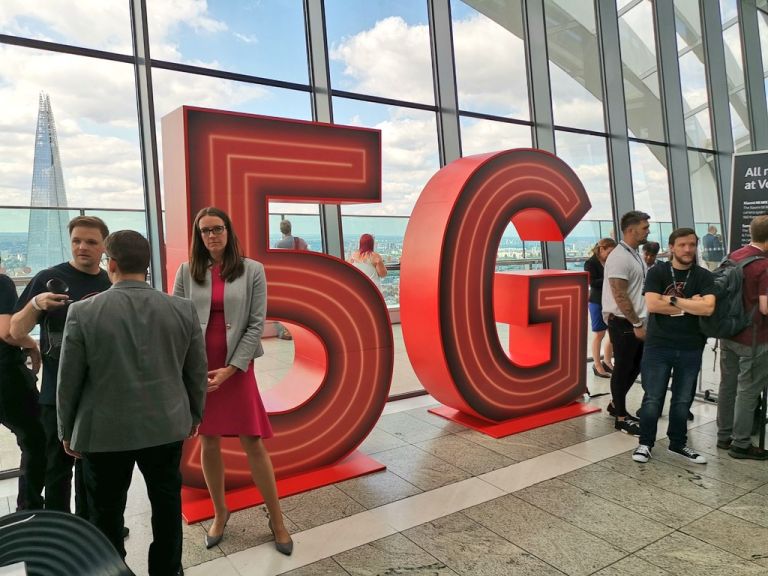 Vodafone has today enabled its much-anticipated 5G network, with a jam-packed event in central London bearing witness to the official turn-on by British Formula 1 racing driver Lewis Hamilton. You can watch the moment Vodafone's 5G network was officially switched on in the video below:

As T3 reported it would back in May, Vodafone's 5G network is now live starting today, July 3, in seven UK cities including Glasgow, London, Manchester, Liverpool, Birmingham, Cardiff and Bristol.

And, in news that is sure to spark joy in the hearts of phone owners, Vodafone is offering its 5G network for the same price as its 4G network.

"We are the only UK operator to offer unlimited data over 4G and 5G," stated Max Taylor, Vodafone's Consumer Director, before unveiling that the provider has launched a new Be Unlimited campaign, which offers three tiers of pricing including Unlimited Lite, Unlimited, and Unlimited Max.

"We want as many people as possible to experience 5G. No premium," Taylor concluded.

Vodafone's 5G home solution is the 5G GigaCube, which is a portable wireless 5G router that is available on its own from £30 per month.

According to Vodafone, the network has invested £4.5 million into 5G and has more than 85 million connected devices around the world. And while the provider's Chief Technology Officer Scott Petty states that "5G today will be 10 times faster than 4G" and that "5G is a lot more efficient", too, the supplier actually believes that 5G's true benefit comes from "the new devices that [will be] connected to our network" over the next decade.

"We'll have more things connected to our network than phones," noted Petty on stage, before elaborating that with 5G "we can support a massive number of more devices" and that "5G can be transformational for rural communities".

Petty also announced that Vodafone is the first operator in the world to offer a commercial 5G roaming service, with 5G roaming enabled in Spain, Italy and Germany by the end of the month.

Vodafone also confirmed at the switch-on event that by the end of the year its 5G network coverage will extend to Birkenhead, Blackpool, Bournemouth, Guildford, Newbury, Portsmouth, Plymouth, Reading, Southampton, Stoke-on-Trent, Warrington and Wolverhampton as well.

The 5G phones that Vodafone is offering to buy online and in its stores include the Xiaomi Mi MIX 3 5G and the Samsung Galaxy S10 5G, while Vodafone's 5G GigaCube (a router that harnesses the power of its 5G network to supply home internet) is now available to register interest in.

Vodafone also has a 5G coverage network checker, which allows you to find out exactly if the area in which you live is covered. Simply type in a post code and the tool then allows you to see the extent of Vodafone's 2G, 3G, 4G and 5G coverage in that area.

To demonstrate the potency of its new 5G network, Vodafone ran a demonstration where Wasps centre Juan de Jongh was equipped with a haptic feedback body suit that was connected, via Vodafone's 5G network, to a training tackle bag located inside the Ricoh Arena in Coventry.

The bag was then tackled by a pair of children from the Wasps junior teams, and then by a first team team mate of de Jongh's. The result each time, due to the low latency delivered by 5G, was that as soon as the bag was tackled, de Jongh received an instantaneous feedback through the suit at the switch on event in London.

A video of demonstration can be watched below:

"We started our 5G journey more than three years ago. We led the way in setting 5G standards to ensure phones and networks work well together. We upgraded our masts to be able to take 5G without disruption. And we were the first UK company to test 5G over our all-fibre core fixed and mobile network.

"This is important. It means we can today announce the largest launch of 5G in the UK and be the first to announce 5G roaming. It means that UK businesses can lead the world in adopting 5G to boost productivity and attract investment. It means consumers can get the fastest mobile speeds ever, and it means that our public sector will be able to adopt new services to improve healthcare, social services and housing."

With its UK 5G network switch-on, Vodafone joins EE as one of two UK providers who now officially offer a consumer 5G service, with Three also set to follow shortly in August with a 5G network of its own. T3 tested out EE's 5G UK network in our EE 5G review last month.

Earlier this week BT also confirmed that it is launching a 5G network "from Autumn" 2019, and that it will be available in "the busiest parts of London, Birmingham, Manchester, Edinburgh, Cardiff, Belfast, Glasgow, Newcastle, Liverpool, Leeds, Hull, Sheffield, Nottingham, Leicester, Coventry and Bristol."

O2 has also confirmed its customers can look forward to 5G coverage in 2019, too, with the provider stating that by the end of the year Belfast, Cardiff, Edinburgh and London will be covered, and that other areas of the UK will enjoy roll-out from 2020 to coincide with the wider availability of 5G phones.

More information about Vodafone's 5G network is available on the provider's official website.