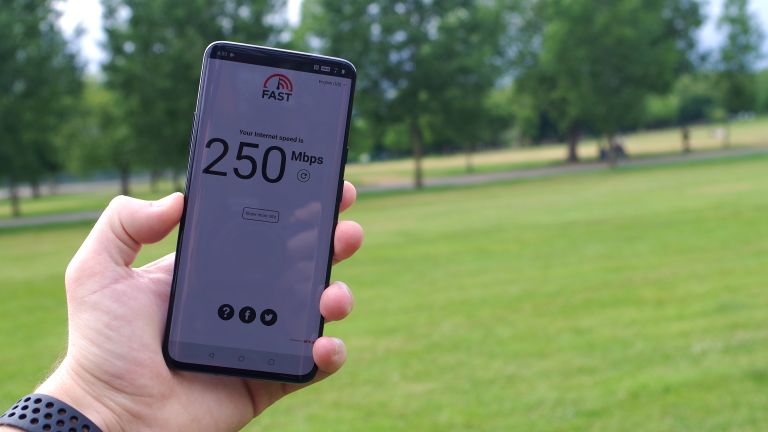 Last month, EE rolled-out its 5G network across London, Cardiff, Edinburgh, Belfast, Birmingham, and Manchester – bringing 5G to UK consumers for the first time, since Vodafone isn't scheduled to fire up its rival network until July 3.

To find out, I spent the last week or so wandering around the bustling streets with a shiny new OnePlus 7 Pro 5G – the first 5G-enabled handset to launch in the UK. Although the Samsung Galaxy S10 5G, Oppo Reno 5G, and LG V50 ThinQ 5G follow this month.

If that list sounds like it's missing a major manufacturer, that's because it is. Plans to bring the 5G-enabled Huawei Mate 20 X 5G and Mate X to EE have been put on ice, following the recent Android ban. Oh, that other major manufacturer? Apple isn’t doing 5G yet.

First off, 5G doesn't outright replace 4G. Instead, it works in conjunction with the existing mobile network. In the busiest areas of the city during its most congested times, 5G devices should still be able to achieve much faster speeds because of the extra headroom. Think of it like a clogged-up motorway on a sunny bank holiday weekend, with nothing but bumper-to-boot traffic for miles – 5G is like an extra motorway lane that only you can drive on. Well, you and any other early adopters who have taken the plunge on a brand spanking-new 5G handset.

Unfortunately, that metaphorical 5G motorway lane isn't available everywhere – even in London, where the 5G network is now "available", there are streets, stations, and parks where there is no 5G coverage to be found. As such, if we can stretch our clunky metaphor to breaking point – don't expect to always be able to rely on your 5G super-highway being there... there'll likely be large swathes of your morning commute where you're stuck in traffic like everyone else.

Helpfully, EE has provided an incredibly detailed heat-map of each of the six cities where its 5G network is now available. Before taking the plunge, it's well worth scouring the map and checking that at least some of your most frequently visited spots are included in the 5G-touting zone. EE will continually update the map as its network expands. But if your home and office aren't in the right location, it might be worth giving a miss and sticking with good ol' 4G for now.

Annoyingly, the T3 Offices are slap-bang in the middle of one such blackhole – relegating our cutting-edge OnePlus 7 Pro 5G to the 4G network of yore. Fortunately, it doesn't take much of a walk before I was able to pick-up a strong 5G signal.

When you're on 5G, it's brilliant. The speeds can be ludicrously fast. But more often than not, they're just consistently great.

EE expects its customers to experience a boost in speeds of around 100-150Mbps in the busiest areas. That gives you speeds that are within the theoretical top of the range of what can be achieved on 4G but you're going to be hitting them almost constantly. Just reaching those speeds in the busiest areas is hugely impressive.

Connecting to a 5G signal means you'll be able to instantly refresh your social media feeds, plan a route on Google Maps, or nip to the front of the queue in that all-important TicketMaster pre-sale – all while around you crowds of people with 4G handsets are gawping at endless loading animations while their apps grind to a halt, cutting off their videos in the middle of someone's senten-

Of course, it's not just about consistency. If you're in the right place at the right time, 5G handsets can blast past the upper limit of what can be achieved on 4G, which tops-out at a (very) theoretical limit around 300Mbps. I was seeing speeds that put fibre broadband to shame, but that does fluctuate as you move between cell towers.

In my time with 5G, the OnePlus 7 Pro 5G sped past 400Mbps on occasions. That's fast. In fact, it's so fast that app creators will need to update their software to take advantage of these new speeds. I did notice a few quirks with Android apps that were clearly dumbfounded by the internet speeds suddenly available to them.

For example, if you scrub forward in a YouTube video – well past what has already buffered – there's no pause as the phone catches up and loads the next part of the clip. It just plays immediately. However, since Android apps are so used to making people wait to buffer, there's a grey filter applied on-top of the video – which is usually used to indicate that it's loading – even though the clip is already playing.

Likewise, by default, the YouTube app only loads two dozen or so search results, so you'll find yourself hitting the bottom of the list and having to refresh quite often. This is a (sensible) decision from the app manufacturers as defaulting to loading up 100 or so video results every time you search for something on YouTube would cause any device on a typical 4G to start spitting feathers.

It'll take a while for app creators to start tweaking their apps to take full advantage of the seriously impressive new speeds available to some handsets.

Like any new technology, there will be a teething period while apps are updated, settings are tweaked... if you're thinking of becoming an early adopter of 5G, it's something you'll need to get used to. One thing you won't have to get used to is sh*t battery life – something that people were terrified would be the case with the new network technology ahead of its launch. In our time with the OnePlus 7 Pro 5G it didn't get uncomfortably warm, and didn't burn through battery as it hit 5G speeds.

That pretty much sums up 5G in the UK right now. It can be preposterously fast, while other times it can just be enough that your phone doesn't grind to a halt along with everyone else in a busy train station. It's available in the busiest areas, but it might not be available in your home, office, or your favourite local coffee shop. It's worth checking all of these out before you cough up anything quite yet.

If you're always tethering your smartphone to work remotely on your laptop, these speeds could drastically boost your workflow. After all, you'll have a fibre broadband connection in your pocket at any time – location permitting, naturally.

If you just want to ensure there's never any stutter as you flit between Spotify tracks, or want a mobile connection that'll let you download a movie in the seconds before you board a longhaul flight instead of pre-planning and doing it at home the night before, you need 5G now.

For most, UK's inaugural 5G network is a bit of a luxury, but who doesn't love a bit of luxury?

5G device contracts on EE start from £54 per month. For that you'll get a 10GB monthly data allowance and the Oppo Reno 5G. This plan also carries a one-off £170 upfront cost for the smartphone. The most expensive EE plans max-out at £89 a month for 120GB of data and either the Samsung Galaxy S10 5G (£10 upfront) or the LG V50 ThinQ 5G (£10 upfront). All EE 5G plans come with unlimited calls and texts.

EE has also introduced something it's branded Swappable Benefits. These perks can be changed at will from within the EE app and offer a number of nifty bonuses, like the ability to stream Netflix, BT Sport, Apple Music, Tidal, Prime Video, and MTV without eating into your monthly data allowance.

You can also stream BT Sport on your phone in HDR for free, or take your monthly mobile data, minutes and text message allowance to a number of extra countries – like the United States – for no extra cost.

EE also offers 5G SIM-only plans for those who prefer to buy their phone outright. These start from £37 a month for 40GB of data and two Swappable Benefits.