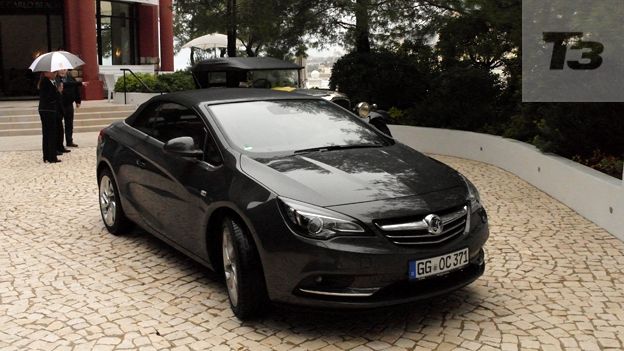 The Vauxhall Cascada will be the company's first full-size convertible in around 100 years with the company hoping to take on the Audi A5 Cabriolet by including premium tech that will keep the iPhone-generation happy with an affordable price tag.

Boasting some serious tech inside the Cascada isn't your average convertible with Vauxhall looking to implement the same level of technology and safety features that you'd find on a well-specced saloon car like the Insignia or the tech-heavy Volvo S60.

As such you'll find a front and rear camera system able to detect incoming potential collisions whilst the rear camera serves a double purpose as a parking assist predicting your angle of approach as you move the steering wheel.

Side Blind Spot Alert also features with the cameras able to show you when incoming traffic is in your blind spot via an indicator built into the wing mirrors.

Next to the dashboard is the same flagship multimedia console found on the Insignia boasting full iPhone and smartphone connectivity along with Sat Nav, CD Player and radio.

Adaptive Forward Lighting is probably the most impressive gadget however with the Cascada able to detect up to 11 different environments and then adjust the lights to match, whether it's in a busy urban centre or on the winding coastal roads.

Included in this is High Beam Assist, a rather neat new piece of tech which uses a sensor built into the windscreen to detect incoming traffic and then automatically dipping the lights.

Volvo recently unveiled their own version which is also automatic but instead of dipping the lights it uses a series of tiny fragments to distort the light shielding the incoming car giving the illusion of an 'always on' High Beam.

Heated seats and a heated steering wheel are also available on the Cascada along with a range of engines from a 1.4 Turbo petrol all the way up to the 2.0 Bi-Turbo diesel which will go from 0-60 in just 8.9 seconds. You'll also be able to lower or raise the roof in just 17 seconds and do it on the move up to 30mph.

Speaking at the UK press launch of the Cascada in Monaco, Denis Chick, Director of Communications at Vauxhall UK admitted that the Cascada is just one part of a change in image for the brand saying,"Our cars prior to the Insignia were flat-sided boxes, quite stylish but ultimately still ordinary however the Insignia changed that."

Talking about the importance of technology in todays cars Chick went on to highlight a huge change in demand from young consumers with new buyers looking to 'drive inside an iPhone', something that Vauxhall is undeniably looking to address with its new smartphone-focused Vauxhall ADAM.

The Cascada will be launching in April with the 2.0 Bi-Turbo diesel arriving shortly afterwards. Watch our video below to see the Vaixhall Cascada in action.