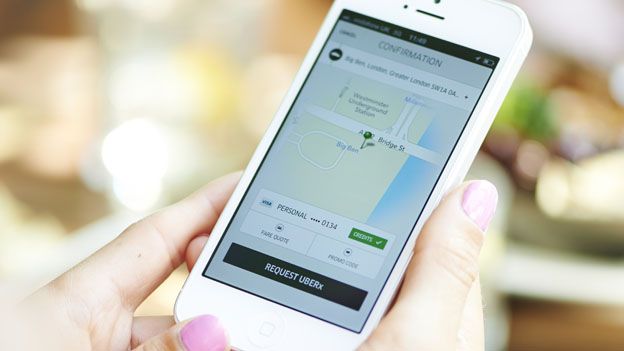 A phone call. “Hello, is that Duncan? Uber for you.”

When you get used to having online services at your beck and call, with Threads choosing your clothes, Zip dry-cleaning your clothes, Deliveroo bringing your meals, Pact providing the coﬀee for afterwards and Uber getting you just about everywhere, it feels a bit odd being in rural Wales, where my parents live and where there's none of that. Not just no online services; there's no internet, much of the time. Now, I'm not one of those city folk who go to pieces at the slightest sign of diﬃculty in a non-urban environment. Like Ned Beatty in Deliverance , for instance. This, however, was quite something else.

My Uber account is paid for, of course, by my credit card. Normally, it would be a simple matter to sort this out – looking up the right number to call to cancel the card, a quick email to Uber, a change of settings on its app while awaiting a response… Job done. With no broadband and no 3G, let alone 4G? Really not so simple. I tried to call the Uber driver to tell him that his passenger wasn't me. “Drive immediately to the nearest police station, my good man!” is what I intended to say. However, Uber handles all calls through some cunning central server. So you need a Web connection in order for its 'Call Driver' button to work. I tried changing my password and taking my credit card oﬀ the Uber app. This is not possible without an internet connection. Great.

What made this situation truly nightmarish, however, is that's it's not true to say that there was no internet connection. There was an intermittent 'E' signal – remember that, city folks? So the Uber account page kept threatening to load, but then didn't. I could do a Google search for 'phone number cancel credit card', but the results never quite came. As Basil Fawlty once said, it wasn't the despair he couldn't stand, it was the hope. Even worse, each time the connection came back momentarily, I could actually see, through Uber's excellent app, the car that was carrying the guy pretending to be me heading towards its destination. I also couldn't check my credit-card account to see if any other transactions were going out, and that was a really horrible feeling. I started to panic.

Even if the card was only being used to take Uber rides, that could eventually get expensive. I imagined that the alternative version of me was probably going to be spending the evening journeying from one party to another. Probably selling drugs, and shivving other bad slags for disrespecting him. Oh god. And then, to cut a long story short, the broadband started working. “Yes,” my dad said later, “it comes on for a few hours most evenings.” A bit like electricity back in the 1970s. Suddenly, I was at liberty to cancel my credit card, change my Uber password and prevent any further misuse of my ﬁnances. I decided priority one was to talk to the driver. Me: “Mate, we spoke earlier. That's not me in the back of the cab, and you're not getting paid for this job.” [Long pause… Driver talks to 'urban me', but I can't hear what's said.] Urban me: “Yeah, I'm his brother.” Driver: [Inaudible, but angry, and followed by the sound of a car door opening and someone 'having it away on their toes and legging it', as the Cockney folk would say].

Uber refunded my rides – this was the second of the evening, as it turned out – but by then I'd cancelled my card, and then had to spend a good few hours dealing with the fallout from that. In many ways, this was a pathetically unimportant event; the very deﬁnition of a ﬁrst-world problem. But for that half an hour, with no access to a few core online services, I felt like a turtle without its shell, and it was damn scary. I'm never leaving the city again.

Now check out: T3 Opinion: If we don't save the BBC we'll regret it forever