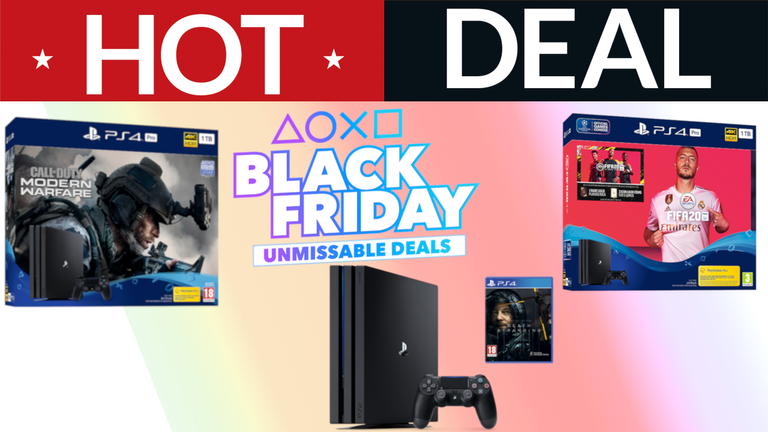 PlayStation's Black Friday sale kicked off with discounts on games and accessories, but now we're just a few days away from the big day, the big ticket items are getting prices slashed which means right now, you can get a 1TB PS4 Pro with your choice of a brand new, blockbuster title for just £299.99.

You can take your pick from FIFA 20, Call of Duty: Modern Warfare, and Death Stranding - three fantastic titles that you'll find on our list of best PS4 games. While the discounted price is generally consistent across the board, the odd retailer may knock a few extra quid off, so we might point you in their direction. Check out the best price for each bundle below:

PS4 Pro 1TB | RRP: | Deal Price: £289.85 | Save:  £110.14
ShopTo is once again beating everyone to the punch with the lowest price on this bundle and - incidentally - the highest pre-sale price. This bundle retails for £50 more than it does everywhere else, but as long as the Black Friday sale is on, it's the cheapest offer on the PS4 Pro and Call of Duty: Modern Warfare.
View Deal

PS4 Pro 1TB | RRP: | Deal Price: £299 | Save: £49.99
Death Stranding is the first game from Hideo Kojima's new studio, after his break from Konami and the Metal Gear Solid franchise. It has a star-studded cast, including Norman Reedus, and Mads Mikkelsen, to name a few. It launched exclusively on PS4 Pro, and if you're a fan of Kojima or slightly offbeat games with a triple A budget. this is the bundle for you.
View Deal

There are Black Friday bargains to be had all over the internet, not just over on the PlayStation site, so stay tuned to our best PS4 deals and PS4 Pro deals for Black Friday 2019 page to make sure you're getting the best price on your brand new console.