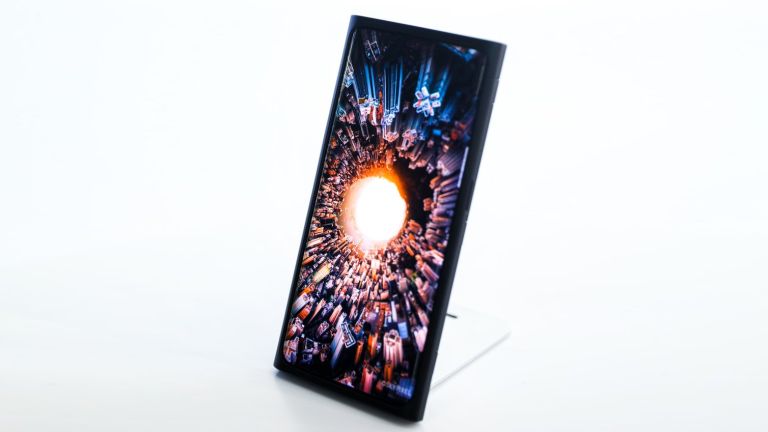 Oppo has unveiled its ingenious new solution to satisfy our insatiable desire for increasingly larger screens, coupled with the need to keep phones small enough to use one-handed and keep all the features we've come to expect from a modern handset, including stereo speakers, a front-facing camera, and more.

Oppo has embedded a selfie camera underneath the display on the front of a handset. Oppo has dubbed the technology a USC, or Under-Screen Camera. The manufacturer will bring the in-display camera to a handset "in the near future".

This solution makes a lot of sense. After all, fingerprint scanners have gone through a similar journey. A number of high-profile manufacturers have already moved from the front, rear, and side of their devices to beneath the display. Embedding the sensor into the screen means the bezels around the display can be shrunk to allow more room to squeeze larger panels into handsets without increasing the footprints.

In order to maximize the size of the screen, smartphone manufacturers have a number of solutions. The Apple iPhone XS Max has a curved notch at the top of the OLED to house the Face ID system, ambient light sensor and selfie camera, Samsung Galaxy S10 Plus has a sizeable pill-shaped cut-out in the top right-hand corner of the screen for the selfie camera, and finally, OnePlus 7 Pro has a pop-up drawer for its camera that takes time to emerge before you can take a selfie or use Face Unlock.

If we're being brutally honest, none of these are ideal. Notches can cut into video when watching in landscape mode, and moving parts can be damaged when the phone is dropped and only have a finite number of return journeys they can do.

That said, the Oppo USC isn't a perfect solution, either. The Chinese company has admitted that placing its custom transparent screen in front of the lens does reduce the image quality from the camera. Haze and glare can interfere with photos from the embedded camera, something that Oppo has tried to address with algorithms.

It claims the algorithms ensure the camera quality is "on par with mainstream devices," but there's still time to refine before it ends up inside a commercial product. Oppo often shows off the pioneering technology before it shows the handset that will benefit from the feature, like the 10x zoom that was showcased months before it surfaced in the flagship Oppo Reno 10x Zoom.