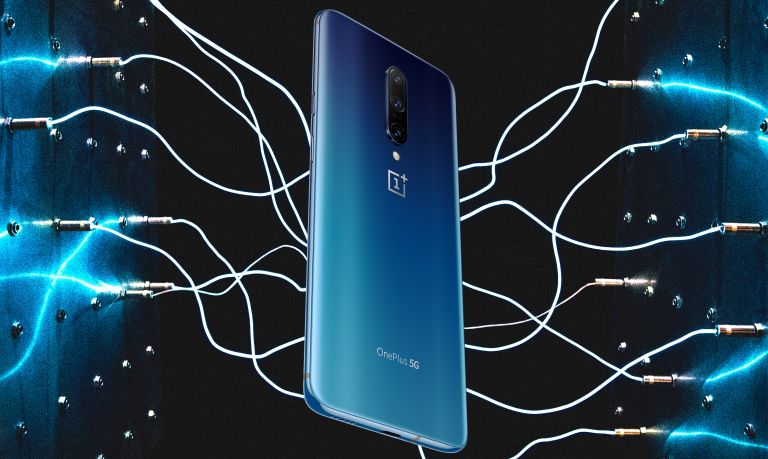 OnePlus unveiled its feverishly-anticipated OnePlus 7 and OnePlus 7 Pro during a trio of launch events in London, New York and Bangalore yesterday. It also took the wraps off a new pair of Bullets Wireless earbuds with improved sound quality and faster fast charging. And finally, as if that wasn't enough, the Shenzhen-based company revealed new details on its first 5G-enabled handset.

Dubbed OnePlus 7 Pro 5G, the flagship smartphone will be identical to the standard 4G-touting OnePlus 7 Pro – same design, cameras, display, battery cell. The only difference will be its ability to surf speedy 5G networks. That's a very different approach to the Samsung Galaxy S10 5G, which is a completely different device with more cameras and a bigger battery and screen than the standard S10.

The OnePlus 7 Pro will be exclusive to mobile carrier EE, with the handset scheduled to launch alongside the super-fast network at some point "this summer".

At launch, OnePlus 7 Pro 5G owners will be able to access 5G in the four capital cities in the UK: London, Cardiff, Edinburgh and Belfast – plus Birmingham and Manchester. EE plans to roll-out 5G connectivity to some of the busiest areas in ten more UK cities later in the year – Glasgow, Newcastle, Liverpool, Leeds, Hull, Sheffield, Nottingham, Leicester, Coventry and Bristol.

The audience at the launch event (the majority of whom paid £16 to attend) obliged with cheers, whoops, and rapturous applause. As such, the number of handsets available in the giveaway was doubled.

EE will now be randomly selecting 100 customers who bought the OnePlus 6T on EE to win a free upgrade to the OnePlus 7 Pro 5G as well as a complimentary 5G plan to test the phone on. EE was a little sparse on the details of how exactly it will pick from its OnePlus 6T customers to select the winners. So, we'd assume its just a lucky dip.

Getting a free upgrade to a 5G plan and getting the brand-new OnePlus 7 Pro 5G too is a pretty great giveaway. It's a prize fund worth in excess of... well, we don't really know. OnePlus 7 Pro 5G doesn't yet have an RRP yet, but will presumably cost more than the £799 maxed-out OnePlus 7 Pro announced at the launch.

EE boss Marc Allera said: "5G will provide a new era in connectivity on the move, giving customers the best mobile experience they’ve ever had, and opening up a whole new world of connected possibilities from AR to high definition video and gaming.

"We’re working with OnePlus, which – like EE – is a pioneer in its field, to exclusively offer the OnePlus 7 Pro 5G to our customers. Through our partnership, these customers will be there on the first steps of the UK’s amazing 5G journey."

Customers can register their interest in the OnePlus 7 Pro 5G on EE now to be among the first to hear about when the handset will make its way to the network.