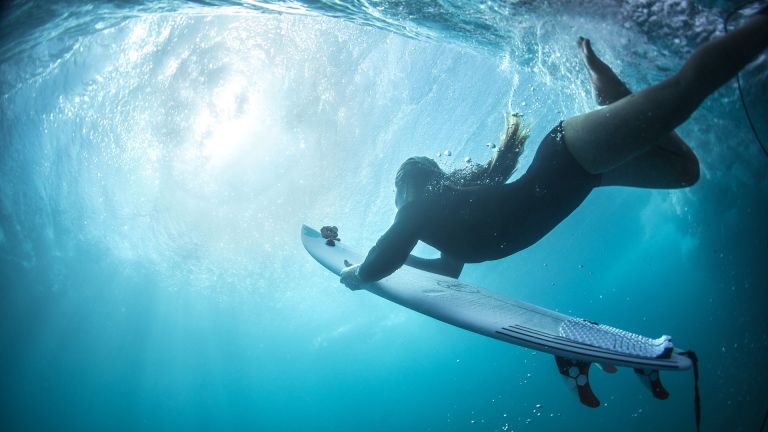 Drone overlord DJI has just released its first action camera, the DJI Osmo Action, and it looks like a proper GoPro challenger, going head-to-head with GoPro's flagship model, whilst offering a killer new feature (more on that later). Oh, and it’s £50 cheaper!

The Osmo Action is aimed at action sports enthusiasts, vloggers and anyone looking for a rugged shooter to capture high-quality video and stills. So far, so expected.

Mirroring an approach already taken by the mighty GoPro HERO7 Black, the DJI Osmo Action has built-in image stabilisation, so you won't need a gimbal to get smooth, steady footage.

However, the big difference with the Osmo Action is the inclusion of dual colour screens.

Why, we hear you ask... Excitingly, a 1.4-inch display at the front enables you to see at a glance whether you’re in frame when vlogging or taking a selfie. This could be a real game-changer for capturing better selfie footage.

While the more traditional 2.25-inch rear touchscreen, finished with a water- and fingerprint-repellent coating, shows you the bigger picture when filming others.

Rock steady and ready to roll... but where's the GPS?

Just like GoPro’s top-billing action cam, the dust- and shock-proof Osmo Action offers voice-activated control. However, there's no GPS – there is on the HERO7 Black – and social sharing functions look basic.

There’s two built-in microphones, and a waterproof case keeps the Osmo Action safe underwater down to 60m (11m without the case).

DJI says the inclusion of filters, including Orange Seawater and Purple Freshwater filter, should restore the natural colour of footage recorded underwater. Surfers, divers and snorkelers, this could be your dream action shooter.

Time lapse mode is here too, plus custom exposure settings (manual and semi-automatic).

And, in a move that will no doubt annoy GoPro yet delight its users looking to try an Osmo, it's designed to work with a wide range of existing GoPro mounts.

Interested in trying DJI's first action camera for yourself?

Buy the Osmo Action for £329 from DJI's website today, or from authorised dealers as of May 22.