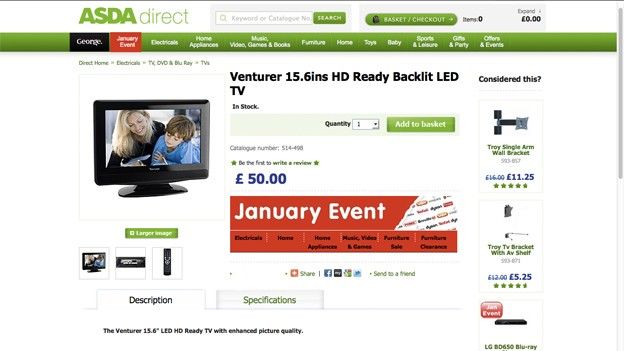 We've heard of cutting costs but this is an entirely new level, Asda will be selling a LED HDTV for under £100, yes that's right, under £100

Asda has announced that it will soon be offering a 15 inch LED HDTV for just £50 making it one of the cheapest HDTV's available to buy brand-new.

The Venturer 15.6 inch HDTV offers up a 720p resolution screen which uses LED backlighting technology, on the back you'll find a HDMI port, AV and Scart input which means you'll be able to hook it up to a Blu-ray player or games console.

Unsurprisingly Asda are feeling rather smug about this with their HD TV buyer Michael Arnott keen to highlight the advantages of having a second TV in the home.

"This is an astonishing deal, and we're delighted to be able to bring HD-Ready TV to our customers at such an amazing price. We're also glad to be doing our bit to support domestic harmony this Christmas."

While it may be no Smart TV or super-thin LED Samsung UE55D8000 it is however a complete steal, and for that money you'd possibly consider putting one in every room.

Listed on Asda's website as being currently out of stock the Venturer will apparently be making its debut soon so head on over and check out its financially friendly specs.

What do you think, is this the best deal of the year? Let us know what you think via the comments box below...