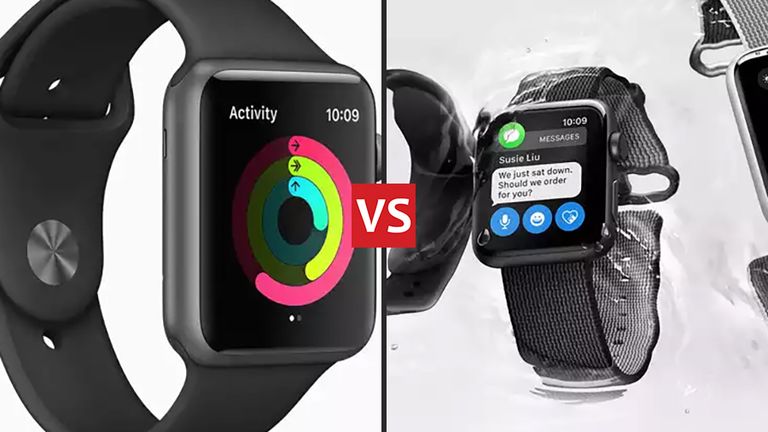 You've no doubt noticed that there's a new Apple timepiece in town, and if you're in the market for a smartwatch then you might well consider it an obvious choice for the top of your shortlist. But wait just a minute, because there's a 'Series 1' option from Apple too.

It's cheaper and it does almost everything the Apple Watch Series 2 does, which means your choice of wearable isn't quite as straightforward as you might think. Here we break down the differences between the two devices to help you make an informed choice.

It's worth pointing out the Series 1 isn't exactly the original Apple Watch - it's the original, with a speed boost in the form of a dual-core processor that makes it almost as quick as the brand new Series 2.

The first Apple Watch was announced in September 2014 and went on sale the following April. That means it was 18 months old when Apple took the wrappers off the new model, which debuted in September 2016 alongside the iPhone 7.

It was a pretty impressive arrival, and addressed a lot of complaints about the first Apple Watch, but Apple has kept a Series 1 alternative on sale for £100 ($100) cheaper. As we've noted, it's a tweaked version of the original: there's a faster processor inside it, and it has the upgrade to watchOS 3 installed, just like its more expensive sibling.

It's a strategy Apple has tried with its iPhones - note that it still sells the iPhone 6S and the iPhone SE alongside the 2016 model - and the Cupertino company is obviously trying to keep potential buyers interested at lower price points.

Your buying choices are more restricted with the Series 1, which is only available with an aluminum case and a sport band. As you might have expected, the ultra-premium versions of the first Apple Watch were retired when the Series 2 came along.

Squint and you'll miss the design differences between the Apple Watch Series 1 and Series 2 (the extra choices of colours and straps notwithstanding).

Opt for the Series 2 watch and you get the option of a woven nylon band, Nike Sport band (there's an Apple Watch Nike+ special edition) or Hermès strap on top of the original sport band. There are also stainless steel or ceramic cases available if you're willing to pay extra, so bear that extra choice in mind.

For the actual watch body, though, the differences are minimal - just some extra brightness on the Series 2, plus harder sapphire crystal screens if you go for a stainless steel or ceramic case. The Series 2 is a little heavier too.

You can in fact buy any of the extra straps for the Apple Watch and they'll fit both Series 1 and Series 2 devices. Overall, you're unlikely to choose one timepiece over the other on design alone.

Now we're down to the nitty gritty: the raw specs. Both watches have dual-core chips, though on paper the one in the Series 2 is faster (in tests, it doesn't seem to make a whole lot of actual difference, as this is just a watch after all).

There are some extra goodies that come with Series 2: built-in GPS for tracking your routes without a phone and full waterproofing to 50 metres (the Series 1 is just splash proof). Both watches come with a heart rate sensor and Force Touch, plus all the usual stuff like Wi-Fi and Bluetooth connectivity options.

Apple hasn't revealed much about the batteries inside these devices but quotes 18 hours of life for both, so there shouldn't be a massive gap between the Series 1 and Series 2.

There's not all that much between them overall, though GPS is a big feature to have on the watch for those times you want to leave your iPhone at home. Apple says the CPU inside the Apple Watch Series 2 makes it twice as fast as the original - but remember we're talking about the souped-up Series 1, not the original Apple Watch.

The bottom line is that the Apple Watch Series 2 gives you a brighter display, built-in GPS for location-aware apps, and full waterproofing for going swimming.

It's also technically faster, but not to an extent that you're really going to notice. First-person shooters and video editing packages for wearables are few and far between, and most apps will be just as snappy on both timepieces.

Are those extra features worth the extra £100 (or $100)? It really depends how much spare cash you have and what you want to do with your watch.

For running and swimming, the Series 2 is probably worth the investment. If you're just using it for getting notifications on your wrist and trying out regular Apple Watch apps, you're going to be just fine with a Series 1.

The big question is what will Apple do next year? Are we going to get a new Apple Watch every year alongside an iPhone? Or are these devices destined to be updated much less regularly. With only two (or two-and-a-half) smartwatches launched by Apple to date, it's still too early to say.