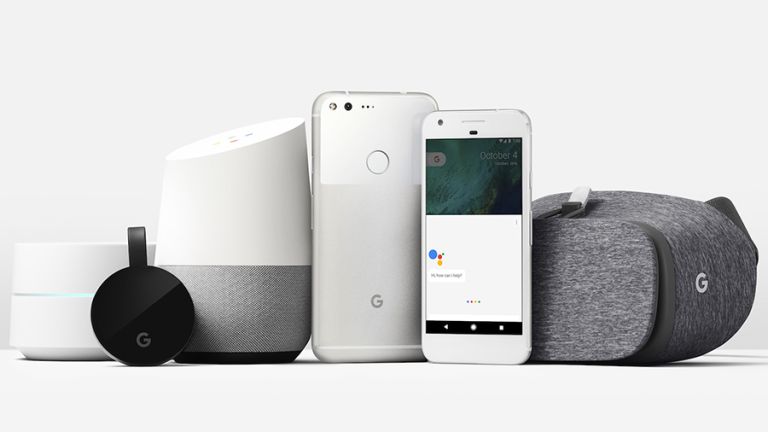 You no doubt noticed that Google recent launched two phones, an Amazon Echo competitor, a VR headset and a set of smart Wi-Fi boxes to create better wireless connectivity around your home. Google's getting into hardware, and in a big way.

These aren't the first devices Google has ever made (the Chromecast came out in 2013) but this marks a whole new chapter in the company's history - particularly in making its own Pixel phones after previously partnering with other firms to make Nexus devices.

So what's brought on the switch?

Google now has its own iPhone (of sorts), its own Gear VR, its own Amazon Echo in the form of Google Home, and even its own Wi-Fi router. We can't speak on behalf of the executives in Mountain View but we do have a few ideas about what Google's up to.

Taking on Apple (and Samsung)

For years Apple has been proving the benefits of controlling both hardware and software: phones and other devices where both run together in (almost) complete harmony.

That wasn't a luxury Google had, with so many hardware partners - Android had to be built to fit all kinds of phones and tablets (Microsoft has a similar issue with Windows, which is perhaps one of the reasons behind the Surface Book).

By developing hardware and software together, Google can make them more closely intertwined (something that it says has helped with the camera speed on the Pixel and Pixel XL) and get features moving forward faster.

Samsung is making some great Android devices, but it slaps its own skin on top of Android, and is threatening to take its phones in a new direction with Tizen. You'll notice it rarely mentions Android by name in its hardware presentations.

The same goes for the other bits of kit Google is developing - by working on the devices at the same time as the code running on them, in theory it should be able to innovate faster.

The Nexus phones were always about showing other Android manufacturers the way forward, and the two Pixel phones are an extension of that - a demonstration not just of software excellence but also hardware excellence too.

We briefly mentioned Microsoft above, and the Surface Books and Surface Pros are useful comparisons. Microsoft still has plenty of hardware partners making Windows laptops and 2-in-1s, but its Surface line can be held up as an example for others to try and follow, and overall their introduction has been a success.

Let's not focus too closely on phones either - Google has plenty of interest in home networking, digital assistants, virtual reality and media streaming, and its various other devices help raise the bar in these areas too.

Other hardware makers are being encouraged to get involved with Daydream VR, for example, but they have the Daydream View to look to and try and beat. Google will be hoping to raise standards across the board for all these platforms.

Google might be spending more time making actual physical stuff these days but we suspect its priority is still software and services - and in 2016 that means Google Assistant, deep learning and artificial intelligence.

By working on devices like the Pixel phone and Google Home, Google can get its Assistant out to more people more quickly - it doesn't have to rely on third parties. What's more, the Assistant can be a Google exclusive, something to tempt people into using Google hardware (even Samsung has its own smart digital assistant these days).

If you watched Google's hardware launch at the start of October you'll know what a large part AI and Google Assistant played - this is how it hopes to stay ahead of the crowd in the years to come.

Though Google Assistant will probably make its way to kit from other manufacturers too in time, having its own hardware range is an important part of promoting Google Assistant, and making sure its allowed to collect as much data as possible (both for improving the Assistant and of course targeting adverts).

We touched on the issue of control above but something we haven't mentioned yet is Android fragmentation: it's perhaps the biggest issue for a mobile OS that is otherwise dominating iOS (at least in terms of market share) across the world.

With its own Pixel phones, Google doesn't have to wait for Samsung, HTC, LG or anyone else to push out updates - they can be sent direct. And the same goes for the other hardware that Google's making.

Google has tried and largely failed to address the problem of Android fragmentation in the past and with the Pixel phones it's taking control and saying enough is enough. The phones even have some software smarts exclusive to the Google line - something that may make Google's hardware partners rethink their approach.

Not only does fragmentation mean users miss out on the latest features, it also slows down the roll-out of important security updates.

For many years Google has provided software and services for hardware makers to use and take advantage of - now its claiming back some control and taking charge of device design and development as well. Watch this space.