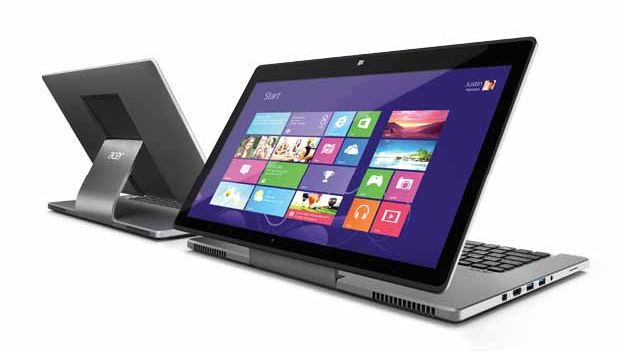 Acer's CEO, J.T. Wang took to the stage to discuss the Taiwanese company's movements into the mobile device market and the importance of touch-based devices to the company's future.

The Acer R7 features a Full HD touch screen on an “Ezel Hinge” that moves the display forward into different positions. Interestingly, the touchpad is placed at the back, drawing the keyboard further to the front of the chassis.

The thinking is that the new design will allow you to switch seamlessly between touching and typing the device depending on your situation.

“With the Aspire R7, Acer has redesigned the notebook with an approach that's based on how people interact with their PCs and devices,” said Oliver Ahrens, president of Acer Europe.

Meanwhile, the Aspire P3 is a 1.39kg, 19.75mm Ultrabook with a touchscreen that can be either be rotated down into a tablet form or detached from the keyboard altogether.

Acer has included Intel i3 and i5 processors in the P3 and the company states the machine's battery will run for up to six hours. The 11.6-inch HD screen has IPS technology and will come with either a 60Gb or 120GB SSD.

Rounding out the new arrivals are a pair of 7-inch tablets. The Acer Iconia A1 is the more interesting of the two and features a 7.9-inch LED-backlit 1024 x 768 screen powered by a quad-core 1.2GHz processor.

It's the company's first attempt at a 7-inch device and comes in Wi-Fi and 3G flavours with Bluetooth 4.0 and a rear-facing 5MP camera.

“Everything that makes tablets so enjoyable is even better on the perfectly-sized Acer Iconia A1. The design is comfortable to hold, while sleek build make it a natural extension for anyone who wants to keep their digital life right in one hand,” said Ahrens.

Acer says that its projected sales for Windows 8 touch devices, like the R7 and P3, are double those of the first quarter. And, despite continued high prices, believes the growth will continue.

Known for its competitive pricing, the company has kept the price tags on the new devices appealing. The Acer Aspire P3 will arrive from £599 this month, while the R7 will follow at £899 in June.