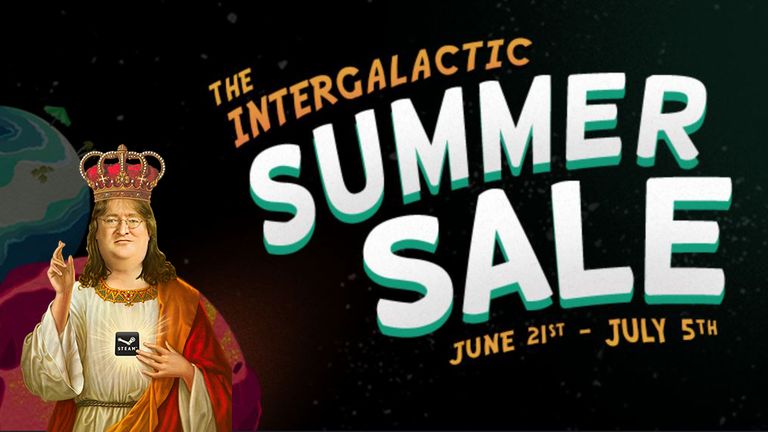 The Steam Summer Sale is now on and, as we predicted, the discounts are amazing.

Throughout the Steam store, both in terms of hardware and software, there's currently up to 95 per cent off, with a plethora of top game deals allowing you to stuff your PC games library for a pittance.

There's also a simply insane 95 per cent off Steam's Steam Link streaming box, which at just £2 (two frickin pounds!) is simply an insta-buy.

We've been perusing every deal the Steam Summer Sale has to offer, and here we present a list of 10 of the hottest deals we've seen so far, as well as bunch of honourable mentions we also think are definitely worth your time. Enjoy!

Steam Link, Steam's slick streaming box that allows you to play your PC games easily on your television, is currently retailing for £2.

That is a 95% saving and, if you haven't already got one of these streaming boxes, it is a no-brainer purchase.

Yes, you'll have to pay P&P, but for a system that automatically detects any system on your network running Steam and then makes it easy to stream titles directly to a TV, this is one hell of a Steam Summer Sale deal.

2. Fallout 4: Game of the Year Edition

Fallout 4: Game of the Year Edition is currently discounted by a whopping 50%, plunging its price down to £19.99.

For that price you get the awesome base game, as well as every single piece of DLC released for the game, including Automatron, Wasteland Workshop, Far Harbor, Contraptions Workshop, Vault-Tec Workshop, and Nuka-World.

We can't wait for Fallout 76 here and if you can't either and don't currently have Fallout 4 with all the DLC, then this Steam Summer Sale deal will be perfect to tide you over until November.

The Bafta-winning epic by Ninja Theory, Hellblade: Senua's Sacrifice is currently a mandatory purchase 40% off.

That sharp cost reduction means you can now follow the broken Celtic warrior's haunting vision quest into Viking Hell to fight for the soul of her dead lover for a crazy-low price of just £14.99.

This action title received fabulous scores across the board from the games industry press and is simply a must-play experience that you won't forget.

Assassin's Creed Origins is very much a return to form for the long-running stab-em-up franchise, with the makers completely overhauling the combat system to great effect.

It looks absolutely stunning, too, especially if you can play it in 4K, and at a 50% off price of just £24.99 right now, is an incredibly tempting proposition if you are on the market for a quality third-person action adventure.

We loved Origins on review, praising the fact that it "innovates in all the right places", and spent many hours exploring its massive world map, discovering its myriad of collectables, and - naturally - assassinating the protagonist's many enemies.

It's madness that Prey is currently reduced in the Steam Summer Sale 2018 down to just £9.99, a big fat saving of 50%, and that's because it is one of the most refreshing, old-school shooters of the past 5 years.

Awakening aboard the Talos I space station, which is orbiting the moon in the year 2032, you soon find that not only is the space station overrun with hostile aliens, but that you are part of an experiment that could have big implications on the future of humanity.

Evoking classic titles like System Shock, Prey is a must play title for action and survival horror fans.

Rally fans should look no further than WRC 7 FIA World Rally Championship right now, as not only does the driving sim look astonishingly good, but it handles superbly as well, with some of the most advanced physics ever witnessed in a driving game.

Stuffed with all the official cars and drivers, and with 52 Special Stages set across 13 countries, this is the definitive rally game of 2018 and, at a ludicrously low price of just £13.99 in the Steam Summer Sale, a direct 60 per cent reduction, it really should be an addition to your library.

This cracking Nazi-slaying FPS blew T3 away on release, and has recently being followed up by an equally good sequel as well in the form of Wolfenstein II: The New Colossus.

The gun-stuffed, gore-tastic, Nazi-killing simulator is a must play though for fans of the first person shooter genre and, thanks to the Steam Summer Sale, that has just got easier than ever.

That's because Wolfenstein: The New Order is currently 50% off in the Steam store, retailing for a very affordable £7.49. That's less than a disappointing sandwich in Shoreditch - and trust us, The New Order does not disappoint!

Machine Games don't just deliver top shooting action, either, with Wolfenstein delivering an engaging story about an alternate history where Nazi Germany won World War II that is littered with interesting characters, too.

Arguably the best Final Fantasy game in years, Final Fantasy XV Windows Edition delivers the epic original game, where Noctis and his royal guard are forced to go on an epic quest to reclaim his birthright as ruler of Accordo, as well as a wealth of bonus content and PC-exclusive features.

The game supports ultra high-resolution graphical options as well, with HDR 10 capable of being enabled if you have the hardware to deal with it, and the game simply looks stunning when cranked up to maximum fidelity.

Indeed, this is arguably the ultimate edition of an already epic game, so the fact that is can now be scored for only £17.49 in the Steam Summer Sale thanks to a tasty 50 per cent discount, is really very most welcome.

9. The Witcher 3: Wild Hunt - Game of the Year Edition

We can't wait for CD Projekt Red's next game, the E3 2018-crushing Cyberpunk 2077, however, until that lands there is no better way to pass the time than by getting stuck into the studio's biggest hit to date, the astoundingly good The Witcher 3: Wild Hunt.

And, in this Game of the Year Edition, you not only get the massive original game but also the two exquisite DLC add-on packs in the form of Hearts of Stone and Blood and Wine, too.

Seriously, at a stupidly affordable £13.99 in the Steam Summer Sale, that's a gigantic 60 per cent price reduction, you would be letting yourself down as a PC gamer if you didn't pick this up. Hell, even if you already played the game on console you should still pick this version up, as it looks and runs best and simply is the ultimate version.

Fans of top-down RPG's simply must play what critics have labelled "one of the best RPGs of the decade" in Divinity: Original Sin 2, which more than echoes past greats such as Baldur's Gate and Icewind Dale.

And, what's more, Original Sin 2 supports 4K, too, meaning that if you have the GPU and monitor to handle it you can enjoy the game's stunning art style and deep, team-based tactical gameplay in Ultra HD.

Divinity is reduced by a modest but, considering the insanely high quality of the game, most welcome 20%, seeing it price drop from £29.99 to £23.99.