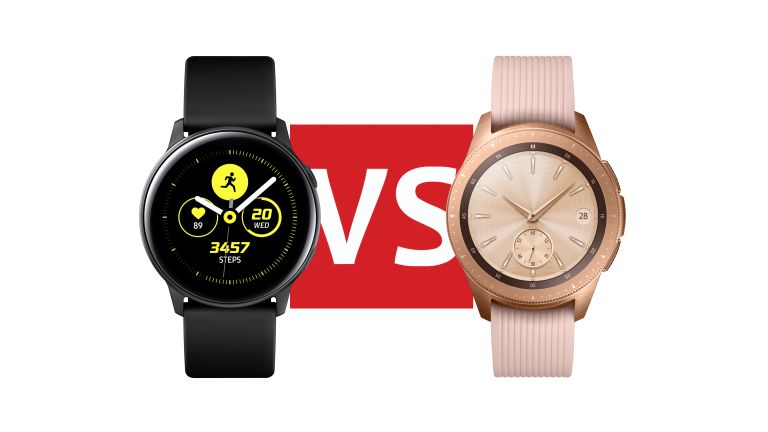 The Active isn't intended as a direct replacement, inside it sits alongside the Galaxy Watch in Samsung's smartwatch arsenal.

It does, however, create a dilemma if you're in the market for a new Samsung smartwatch. Do you opt for the newer model, or is the Galaxy Watch still the one to go for? What exactly has Samsung changed?

We've compared the two smartwatches to answer these important questions and help you decide which smartwatch is for you.

The Samsung Galaxy Watch has a pretty traditional design. It comes in two sizes, 42mm or 46mm, and three colours, Rose Gold, Midnight Black and Silver.

It has either a 1.3-inch or 1.2-inch 360 x 360 circular Super AMOLED screen with a useful rotating bezel around the outside of it.

The Samsung Galaxy Watch Active looks a little more modern, with a sleeker, rounded design. We much prefer it.

There's one size. It measures 39.5 x 39.5 x 10.5mmm and weights just 25g. It's much more suited to smaller wrists, but still perfectly suited to larger wrists as well.

The Active is a lot more comfortable to wear than the Galaxy Watch. It's rounded corners and light weight means you can pretty much put it on a forget you're wearing it.

The interesting change here is there's no rotating bezel. That allows for a smaller overall design than the Galaxy Watch, but will make it more fiddly to interact with.

Inside, the watches are pretty much identical. Both have a 1.15GHz dual-core Exynos 9110 chipset and 768MB of RAM.

The Active differs from the Galaxy Watch when it comes to battery life, with a small
230mAh battery. We're guessing you'll need to charge it every day.

The Galaxy Watch does also offer a 4G model, which allows you to use your watch to receive calls, messages, and data away from your smartphone.

Both of the smartwatches are essentially running the same software, so while the standard Galaxy Watch isn't as focused on fitness as the Galaxy Watch Active, it isn't lacking in this area.

Both have a heart rate monitor, GPS, an altimeter, a barometer, and they're waterproof.

Both can track 39 different exercises, with six of them auto-tracked, and can also track your sleep, measure your stress and vibrate on your wrist to remind you to move more.

The Active goes one step further than the Galaxy Watch with a blood pressure monitoring feature.

Of course, it's also lighter and more comfortable, which is important when exercising.

The smartwatches also have a similar feature set, as they're both running Tizen 4.0.

Both allow you to make contactless payments with Samsung Pay, and both have Samsung's AI assistant Bixby baked in.

The Watch Active has a slightly different look, as it's a more recent version of the software but Samsung may decide to bring this to its existing watch in the near future.

That's cheaper than the Galaxy Watch when it first launched, which was priced from £279.

These are the best prices on the Samsung Galaxy Watch now:

We've only spent a short amount of time with the Samsung Galaxy Watch Active but we already like it, a lot.

There are, of course, questions over battery life, but assuming it's not terrible, we'd whole heartedly choose the Active over the regular Galaxy Watch.

It's cheaper (although the build quality is rock solid), more comfortable, better looking, and can do more things.

Although, if you don't mind the extra heft, and battery life is your key priority, then the Samsung Galaxy Watch is the smartwatch to opt for.