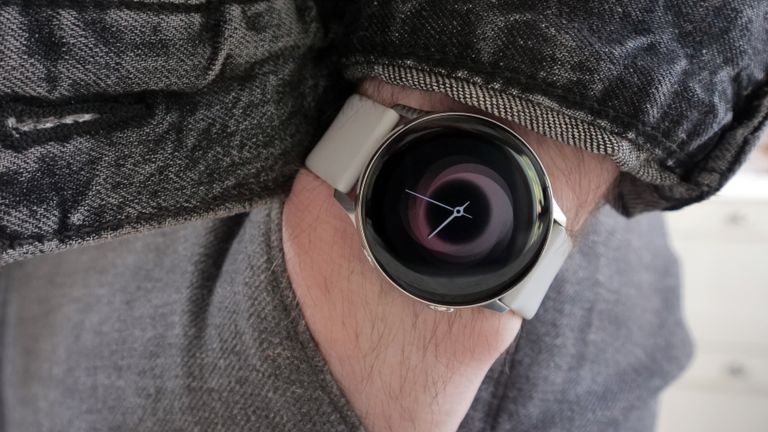 The Samsung Galaxy Watch Active is the sequel to the Gear Sport. It's stripped-down version of the flagship Galaxy Watch, with a focus on fitness tracking and wellness.

It was announced earlier in the year, along with the new Samsung S10 at Samsung Unpacked. After spending some time with the new smartwatch, we can safely say Samsung has delivered a stylish entry-level smartwatch that should also appeal to a broader audience.

It's the redesign which is key to the success of the Galaxy Watch Active, as despite this new smartwatch packing some neat new features, the fact that it looks sleeker and more sophisticated will no-doubt be the foremost decider in whether potential adopters pull the trigger.

From our view, it genuinely looks like Samsung has created an Apple Watch alternative for Android users, although, it's a shame that the blood pressure monitoring is currently MIA in the UK.

Here are our thoughts on the Samsung Galaxy Watch Active.

The watch is priced at just £229, making it one of the most affordable smartwatches out there.

You can find the best prices today below:

Straight out of the box the first thing that grabs you about the Samsung Galaxy Watch Active is the modern, sleek design. It's a complete departure from what Samsung has done before.

I really like it. It's comfortable on the wrist, with its rounded edges and smooth surfaces.

You could quite easily put it on a forget you're wearing it, especially as it weights just 25g.

In terms of exterior functionality, the Galaxy Watch features some side-mounted buttons.

It doesn't feature a rotating bezel, like previous Samsung smartwatches. That'll take a while to get used to if you've owned previous models, but if you're new to smartwatches you obviously won't miss it.

It does make navigating the interface on the 1.1-inch display quite fiddly at times, but we never had an major frustrations.

The Samsung Galaxy Watch comes in a single size, with overall dimensions of 39.5 x 39.5 x 10.5mm. It's nicely proportioned, and can fit both small and large wrists.

There are versions in black, silver, rose gold, and blue. Our favourite is the silver model.

It has enough space for a 230mAh battery inside, which almost half the size of the Samsung Galaxy Watch.

We found that it'll last two days. That's pretty good for a compact smartwatch, and in line with the Apple Watch.

Of course, it's no match for the larger Samsung Galaxy Watch, which can last around five days. So, if battery life is your priority, then go for the larger, more expensive model.

Finally, in terms of hardware, the Galaxy Watch Active features the same dual-core 1.15GHz chipset and 4GB of internal storage space as the Samsung Galaxy Watch.

It's waterproof to 5ATM and rated at IP68, so you can use it to track your swimming sessions.

As the name suggests, health is a major focus for the Galaxy Watch Active, and as such Samsung Health is now expanded with new stress management and breathing features, as well as a collection of 21 indoor exercises and 39 tracked workouts.

You can easily switch between the various tracking functions and modes by flicking through the new UI.

It'll track these pretty accurately, although, it's no competition for a Garmin running watch if you're training for a marathon.

In a first for smartwatches, the Samsung Galaxy active is also capable of Blood Pressure Monitoring. All you need to do it download My BP Lab, the research app jointly developed with the University of California, San Francisco (UCSF), directly to Galaxy Watch Active to monitor blood pressure and keep better track of your physical health every day.

Unfortunately, it seems blood pressure monitoring is currently limited to US.

We found Bixby was quick to activate, and has pretty accurate voice recognition, but requests took a long time, and often resulted in an error message.

It's a pretty frustrating experience, and we'd much prefer if the Watch Active made use of the excellent Google Assistant.

In terms of OS, the Galaxy Watch runs Tizen, now in its 4.0 incarnation. This is compatible with all Android phones that are running Android 5.0 and later, and it will also work with any iPhone running iOS 9.

It does feature a new UI, our overall impressions of which are positive. Some of the icons are a little too small, but apart from that it's a very smooth experience.

It's worth noting that the app selection is poor compared to watch OS and Wear OS, but Samsung's standard apps do almost everything you'd want of a smartwatch, and there's support for Strava and Spotify, so we don't think this is too large an issue.

In my opinion, it far more stylish than previous incarnations of the smartwatch, and comes packing some neat new abilities such as Blood Pressure monitoring (eventually) and competitive water resistance, making for a compelling package.

Its new watch faces, too, give it a modern edge, while its sleek, comfortable design will help it appeal to more people.

Unfortunately, it's not a perfect smartwatch, as small icons make some aspects of the UI fiddly, and voice control with Bixby is a frustrating experience.