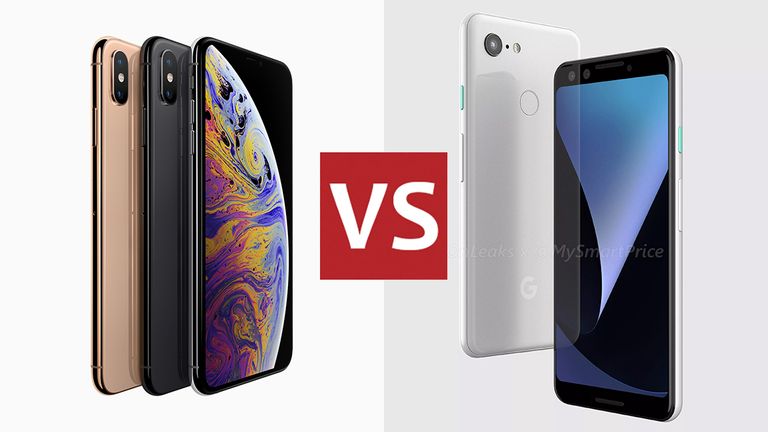 The smartphone world is a clash of two titans: Apple’s iOS and Google’s Android. And every year, new versions of the OS mean new hardware to show it off. This year that job falls to the new iPhone XS and the imminent Google Pixel 3: while both phones have larger-screened variants, the XS and Pixel 3 are the mass-market flagships that’ll be doing the big numbers.

The Pixel 3 hasn’t been formally launched yet – that’s happening on the 9th of October – but as ever, most of the specs have leaked. And that means we can take a pretty good stab at answering the one key question: which one is better?

Be still your beating heart: there are few surprises from Apple or Google this year. The iPhone XS is a tock to the iPhone X’s tick, a refinement rather than a revolution. It doesn’t get the fun colours of the iPhone XR; it’s a big screen with little bezels, this time with IP68 protection from dust and water.

The Google Pixel 3 looks very like the Pixel 2, but there are some key differences. The front camera appears to be a dual-lens model, although the iPhone X-esque notch shown in renders appears to be limited to the larger XL model. And the bezels appear to be thinner, with an edge to edge display like all the cool phones have nowadays.

The Pixel 3 is expected to come with an octa-core Qualcomm, probably the Snapdragon 845 we’ve seen in the Samsung Galaxy S9. It’ll be teamed with an Adreno 630 GPU and 4GB of RAM. On-board storage is a choice between 64GB and 128GB. There’s no SD card slot.

Apple’s chip team is doing some extraordinary things, of which the A12 Bionic processor in the iPhone XS is a great example. Its two performance cores are 15% faster and 40% less power hungry than in the A11, and its performance cores use 50% less energy. Apps launch 30% faster, the GPU is 50% faster than the A11 and it’s the first seven-nanometre chip in the industry.

The A12 can also address larger on-board storage, so the iPhone Xs now maxes out at 512GB. The entry level models still come with 64GB.

The dual-lens front-facing camera in the Pixel is designed to deliver better SLR-style effects such as bokeh (background blur) and Portrait Lighting, with a “super selfies” feature that sounds intriguing. The main camera is a 12MP single-lens effort but comes with a new Visual Core. That’s the chip we first saw in the Pixel 2, where its job was to improve HDR shots. The new version is apparently more powerful and will deliver “incredible” low light shots.

The front cameras are believed to be twin 8MP sensors, one with f/1.8 and the other switchable between f/1.8 and f/2.2.

The main camera in the iPhone XS may still be 12MP, but it delivers DSLR-style bokeh with the ability to change depth of field after you’ve taken your shot, enabling you to move from f/1.4 to f/16 with a swipe. The results are amazing, with backgrounds going from pin-sharp to beautifully blurred. The A12 processor delivers improved face and body detection and scene analysis, improved portrait shooting and what Apple describes as “a trillion operations on every photo you take”.

The new Smart HDR feature uses a four-frame buffer to capture the exact moment with apparently zero shutter lag, and it also takes higher exposure and longer exposure shots to capture highlights and shadows. Those multiple shots are then automatically combined into a single image.

The iPhone XS appears to have the same 2,716mAh battery with wireless and Lightning charging as the iPhone X, but the more efficient A12 processor means an extra half hour of battery life. The iPhone XS Max has the biggest battery Apple’s ever put into an iPhone, although as ever Apple doesn’t say how big: we’ll have to wait for the obligatory iFixit teardown for that one. But Apple claims a full hour and a half more than the iPhone X.

The Pixel 3 battery is expected to be 2,915mAh with wireless charging (something absent from the Pixel 2) and USB-C.

Pixels are flagships for Android, so of course the Pixel 3 will run Android Pie, aka Android 9. That brings iPhone X-style gesture control and it’s expected to use the dual cameras for 3D face recognition. Android Pie also offers significantly improved battery management, intelligent adaptive brightness, improved notifications and App Actions, which anticipate what you’re going to do and provides context-sensitive options when you tap.

The iOS 12 on the iPhone XS is focused mainly on performance with few headline new features: the improved notifications are great and there are really useful family controls, but features such as the workflow-based Siri Shortcuts for task automation are likely to remain niche in their appeal.

It’s unfair to compare the devices when we don’t know what they’ll cost. But based purely on what we think we know about the Pixel 3, we think the iPhone Xs is going to massively outperform it in sheer horsepower. The camera, we’re not so sure about: we’re hearing great things about the improved Visual Core in the Pixel 3, although as it’s teamed with a single-lens camera it might not have the fun with depth effects that its front-facing cameras will offer. It’ll be interesting to see how the two firms’ flagships compare when the Pixel launches next month.