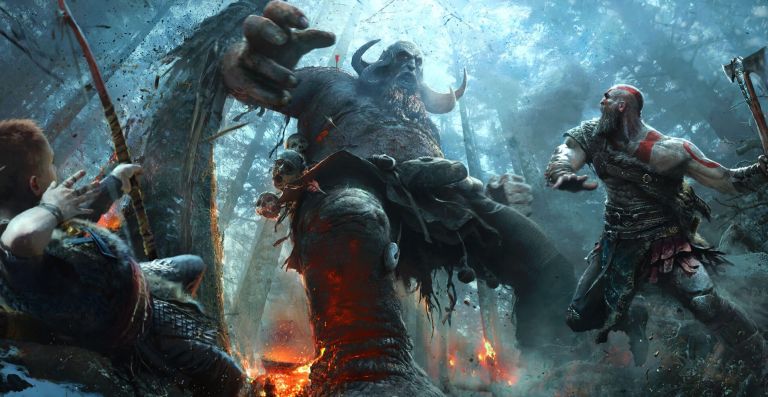 There's no denying 2017 has been an amazing year for games, so how will the next 12 months possibly hope to compete? 2018 has barely begun and we've already got some amazing games on the horizon - and these are just the ones we know about! To wet your appetite, we've gathered together 10 of the most exciting games to be hitting PC and consoles in the near future...

It's been two years since Far Cry Primal and a whole four since FC4, so it's finally time to return to the realm of open-world firefights, animal hunting and co-op destruction. Set in Hope County, Montana, FC5 will feature more intricate interior environments, sharper AI, a larger range of weapons, tamable animals and NPCs that can be rallied to your cause and used as commandable squadmates. The campaign can be tackled solo or taken on with a friend in co-op, and the new game will also feature a more comprehensive map editor for added creative fun.

With Star Wars Battlefront II having a disastrous launch and Mass Effect effectively placed in hypersleep following the poor reception to Andromeda, EA is hoping the Bioware developed Anthem will heal its triple-A wounds. The new IP will be a four-player focused affair with a big emphasis on monster hunting, jetpack flying mechanics and more. Those jetpacks - known as Javelins - come in four types and can be customised to suit your playstyle. The ravaged, post-apocalyptic setting will also play host to dynamic, world-changing weather events that will shape the gameworld you explore.

Heavily delayed it might be, but that hasn't dampened our excitement for the first proper Rare game in years. And it's an ambitious one, too, combining open-world exploration, dynamic events and co-op to create an experience that promises to find the right mixture of PvE and PvP. In a cartoonish pirate setting, you can form a crew with other players, man a ship together, search for treasure and get blind drunk on grog. It's a game all about having fun first and foremost, so expect the same kind of charm and warmth you'd expect from a Rare property.

While Monster Hunter has enjoyed a long run of hit titles on Nintendo consoles, the Capcom series is finally returning to PlayStation with the ambitious and bold Monster Hunter World. Embracing a true open-world format for this entry, the game will emply the same basic principles as previous games in the series - go and hunt massive beasts then craft armour and weapons from their corpses. You can team up with up to three other players, with battles often taking on a dynamic edge due to the ecosystem of monsters you'll be battling with.

It seemed inevitable that Kratos would get the reboot treatment eventually, and considering he killed practically every god and monster in Greek Mythology it stood to reason he's take his anger issues elsewhere. Well, the god-killer has landed in the land of the Norsemen, bringing with him an impressive beard and a son, no less. The new entry will be a single-player-only affair, with a new crafting system and a larger variety of weapons (including your new Leviathan Axe, which replaces your chain blades from the previous games). Expect over-the-top bosses and set-pieces a-plenty.

Coming from some of the same developers that gave us the poignant and heart-felt Brothers: A Tale Of Two Sons, A Way Out follows the co-op setup and expands it into a split-screen affair driven by narrative and player choice. With no single-player option, you'll need to work with another player to break out of prison and outrun the police. Working together in real-time to solve environmental puzzles, create distractions and fight NPCs takes co-op to a whole new level and proves indie titles can feel triple-A on a smaller scale.

With World War Z having given the zombie genre and fast-paced shot of adrenaline, Days Gone arrives with a post-apocalyptic open-world full of zombie hordes that pursue and attack you en-masse. These 'Freakers' (much like Dying Light's undead occupants) are easier to manage in daylight hours, but turn brutal at nightfall so the gameworld turns into a deadly bloodbath when the sun goes down. You can craft new weapons and tools from items found out there in the wild, and you can even use sound to distract fellow survivors and Freakers to your advantage. Oh, and you get to ride a bike. What could be better?

The fact that this is the only Nintendo Switch game on this list might suggest Ninty's handheld console is set for a quiet 2018, but we fully expect the big N has some big hitters up its sleeves in the coming months. We do know, however, that Metroid Prime is back and the FPS will be hitting Switch (we hope) later this year. There's not much to go on just yet, but longtime series producer Kensuke Tanabe is hoping to take the series back to the open-ended shooter fun of the first game. Despite the mystery, and the quality output of Nintendo's first-party titles on Switch thus far, we can't wait to see where MP4 goes.

The much-loved webcrawler hasn't had the worst videogame history - in fact, he's had one or two memorable outings - but Spidey has yet to have his own 'Arkham' rebirth. With Insomniac on developmental duties, this new Spider-Man outing looks to do just that and with current SM comic scribe Dan Slott writing the story and a web-slinging mechanic that's been built from the ground up. Stealth, QTEs and combat have all been built with Insomniac's pedigree in mind, with sections also enabling you to play as Peter Park (sans costume) and flame-haired heroine Mary-Jane Watson.

The Last Of Us Part II

Considering the critical acclaim bestowed upon The Last Of Us it seemed inevitable a sequel would eventually emerge, so Naughty Dog has bowed to our wishes with a second slice of post-apocalyptic misery and crafting. Set after the events of the first game, with an older Ellie and Joel, ND has confirmed Ellie will be the central character this time, with a projected 25-hour-long story and a central them of 'hate' running throughout. Sounds cheery, right? ND is keeping tight-lipped on core gameplay changes but we're expecting larger environments and even more types of fungal zombies to avoid/shank/choke out from behind.