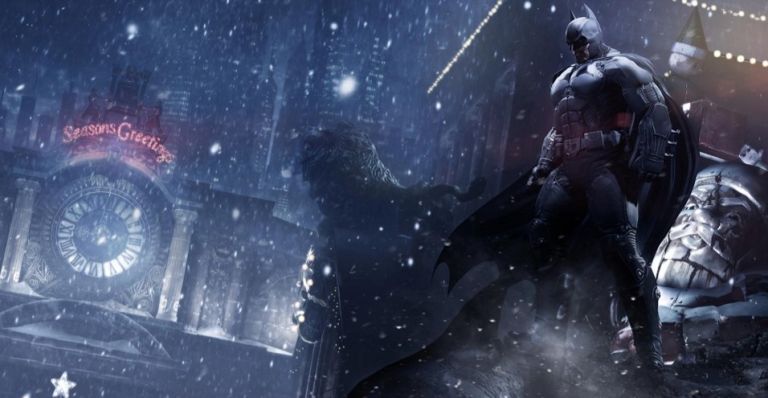 It really is that most wonderful time of the year, so what better way to celebrate the holidays than playing some of the best festive games on the market? Our little list features seven of our favourites, but there are plenty of worthy candidates that almost made the list.

There’s even the tongue-in-cheek slapstick of Saints Row IV: How the Saints saved Christmas or the tundra-covered hills of Kingdom Hearts II’s Nightmare Before Christmas sections (although we opted for a proper Jack Skellington game rather than one with cameos). So break out the sherry and join us for a virtual Xmas celebration.

Turns out a much younger Batman has had a price set on his head by the Black Mask, an act that brings together some of Gotham’s deadliest mercenaries as they try to claim the famous cowl for themselves.

Dark it might be, but with a heavy snowfall dusting Gotham in white while Christmas trees and fairy lights twinkle across the city, there a few more festive locales for a comic book fan than Warner Bros Montreal’s sandbox prequel.

Much like the film that inspired it, the Home Alone game remains a cult classic. If you owned a MegaDrive or a Genesis back in the day (shame on you if you’re too young to know what those words mean) this Christmas-themed chaos simulator was a must-have.

Notorious for its obtuse lack of tutorials (the game tasked you with combining items around the house to make weapons and traps to catch the Wet Bandits), the Home Alone game even saw you sledding between houses as Kevin McCallister. If you’ve never played it, get yourself a reputable emulator right now!

While we could argue for time immemorial as to whether the first two Die Hard films are actually Christmas films (they are), no one can dispute they - and the anthology videogames that eventually followed - are actually set in the festive period. The first of those games sees you scaling the Nakatomi Plaza as John McClane, complete with one-liners and blocky, polygonal Christmas trees.

The second, a light gun-esque shooter, ups the festive counter as you travel on-rails around a besieged Washington Dulles International Airport gunning down terrorists and collecting bonuses. Remember, nothing says Christmas more than fighting terrorism with rockets and shotguns!

There’s plenty of games with winter or festive themes out there, but not many that hold an annual Christmas celebration event of their own. But then again, if you’re a game as big as World of Warcraft, holding your own version of Xmas probably isn’t that weird at all.

The Feast of Winter Veil has been going on as long as the game’s servers have been live, with each year’s World Event offering unique quests that see you exploring Azeroth to find lost reindeer or defeat the Abominable Greench. And if you’re really good, you might even get to meet the WoW Santa Claus analogue himself, Greatfather Winter.

Nothing quite says Christmas cheer like eviscerating an endless horde of zombies, so what better way to celebrate the best time of year by jumping into the survival horror beat ’em up madness of Dead Rising 4? Set during the Black Friday sales, it’s up to you to survive a familiar shopping mall decorated up to the nines with Christmas lights and more.

Horror it might be, but that doesn't stop Dead Rising 4 from going full Xmas on us. You can run around wearing a giant snowman head, you can take out zombies with an ornament launcher and even turn the undead into candy canes via a special magic wand. It’s The Walking Dead’s very own Christmas Special.

The Nightmare Before Christmas: Oogie's Revenge

Yes, we know the Nightmare Before Christmas sections of Kingdom Hearts II are brilliant (we ever name-checked them earlier in the feature) but did you know there's already been a really good Jack Skellington game?

Developed for PS2 by Capcom, the game pretty much took the gameplay model of Devil May Cry and threw in some pumpkins and Christmas trees. It might sound like a cash-in, but we’re yet to see a problem with having TNBC and DMC in the same package.

Set in Halloween Town a year after the first game, you can set down explosive presents to take out your enemies and unleash a huge arsenal of combos and special ability-laden costumes. It’s been lost to time, but it’s well worth seeking out.

There are so many Christmas-themed games and levels to choose from over the years, but we’d be crazy not to include the brilliant ‘You’d Better Watch Out’ mission from 2006’s stellar Hitman: Blood Money.

Any mission that lets you steal that iconic red and white costume from an inebriated Father Christmas has our vote, as does rigging explosives and causing a small riot inside Santa’s Grotto. Blood Money’s seventh mission is a virtual Grinch simulator and we love it still a decade later.