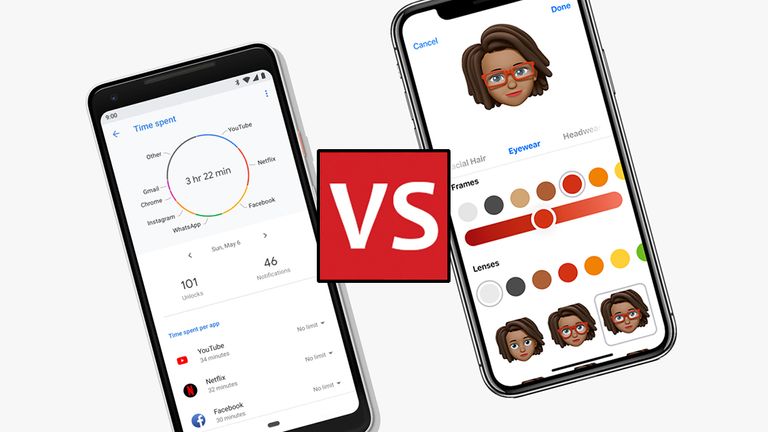 Apple and Google are now locked into a regular yearly cycle when it comes to updating their respective mobile OSes: so far in 2018 we've seen previews of both Android P and iOS 12, and beta versions are already available for the bravest of early adopters to try out.

A pile of new features are on the way, so is it Android or iOS users who should be the most excited about what's coming down the line? Here we'll weigh up what we've got to look forward to, and who might have the edge when these OSes launch in a few months' time.

Neither Android P nor iOS 12 is getting a massive visual overhaul this year, but there are some small changes happening. Apple's mobile OS is introducing grouped notifications at last, for example, which should make for a tidier lock screen.

Over on the Android side, we're seeing some touches of colour, some rearranging of menus, and a revamped gestures menu that adopts a more iPhone X-style approach to make it easier to launch apps and switch between them.

Both Apple and Google are introducing an almost identical set of tools for managing your smartphone addiction and making sure you spend less time glued to your mobile's screen – or at least making sure you know exactly how much time you're wasting. In terms of this category it's more or less honours even.

In Android P, the features have been given the simple name Dashboard: you get a breakdown of the number of times you've unlocked your phone, the time you've spent inside apps, and how many alerts you've received. You can limit the time you're allowed to use certain apps for, and completely mute all alerts in the revamped Do Not Disturb mode (so the visuals are blocked as well as the audio cues).

The best phones for getting Android P

There's more to talk about on the Apple side here, because iOS updates come with revamped versions of all the native apps, whereas Google updates its key apps separately from the rest of Android. Apple wins in this department, but look out for the regular app updates Google pushes out during the rest of the year.

FaceTime is getting the ability to add group video calls, while the new Memoji being added to iOS 12 let you create little cartoon caricatures of yourself for your messages. On top of that a bunch of new stickers and filters are being added, if you like to make use of them.

There's a new augmented reality measuring app called Measure, appropriately enough, and tweaks to the likes of Stocks, Apple News, Photos and iBooks, which is now just called Books. We would've liked to have seen a few bigger updates to core apps like Mail and Maps, but it's still quite a strong showing by Apple.

There's a definite trend for phones wanting to do more on our behalf – becoming more intelligent to help us speed through the tasks of the day – and that's evident again in the updates arriving for Android P and iOS 12. Whichever platform you use, using it is about to get easier and more convenient.

Android P has App Actions, which predict what you want to do next: so if you plug your headphones into your phone, you might see Spotify pop up. Then there are Slices, which give you shortcuts into an app – so you might see a link to text your brother inside the app drawer, as well as a standard link to the texting app. Meanwhile, Google Assistant continues to improve, but as we've said this is updated separately to Android.

iOS 12 has Siri Suggestions, ,meanwhile, which also predict what you want to do next – perhaps showing a prompt to buy a coffee when you walk past the coffee shop on the way to work (if you usually buy a coffee there). You can also create your own Siri shortcuts, bundling groups of actions together in one voice command.

The best phones for getting iOS 12

Android P vs iOS 12: other features

There's still a ton of other stuff to mention as well, with new features still getting added as we approach the official launches: Android P is getting support for notches on the display, smarter text selection, a more efficient battery manager, and more tweaks to help keep user data more private and secure.

As for iOS 12, CarPlay has been given a few enhancements, there's a more detailed battery management screen, managing passwords across multiple devices is now easier, and Apple also says it's significantly improved the performance of iOS 12 on older devices too (the software will work on any gadget that can run iOS 11).

It's hard to pick a winner here but if we were forced to we'd say iOS 12 is getting the bigger upgrades – but that is due in part to the fact that Apple updates all its iOS apps at the same time as the mobile OS itself. Whether you have a phone powered by Google or Apple software, there's a lot to look forward to.