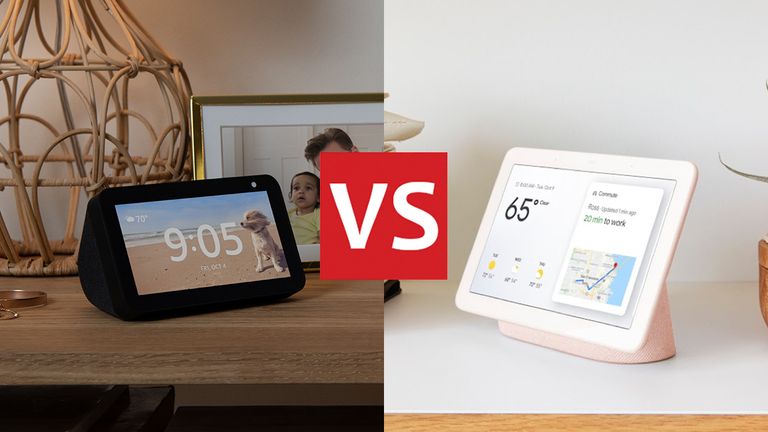 More and more smart speakers are now getting displays attached, and if you do want a smart display to pad out your smart home, then the Amazon Echo Show 5 and the Google Nest Hub are likely to be two of the devices appearing near the top of your shortlist.

So how do you choose between them? Here we'll go through all the key specs and features of these two smart displays, from the different tricks you can perform with them, to the size and resolution of the screens – all so you can make an informed purchasing choice.

Both these smart displays have bigger versions with bigger screens available, so these are the devices to go for if you'd rather have something that's compact and easier to fit on a shelf or a table. The downside is that videos, photos and menus are smaller, so it's up to you what you value more.

The Google Nest Hub has a bigger screen, 7 inches from corner to corner compared with the 5.5 inches that the Amazon Echo 5 sports. The Google device has a slightly more aesthetically pleasing shape too, with the display slightly bigger than the speaker behind it, and it's available in more colours: sand, aqua, chalk and charcoal, rather than just black and white.

That said, the Amazon Echo 5 is by no means an ugly device, and its more compact dimensions mean you can squeeze it into smaller spots – at 148 mm (5.8 inches) it's about 15 percent narrower than the Google Nest Hub, and it's shorter too. Both these smart displays neatly integrate the physical buttons they have, including volume buttons.

There's a lot of similarity here: both the Amazon Echo 5 and the Google Nest Hub will answer your questions, set alarms, timers and reminders for you, help you control your other smart home devices, display photos and videos, and more besides. Of course in the case of the Amazon speaker it's Alexa running everything, whereas the Nest Hub is powered by the Google Assistant.

There are other differences to talk about as well. The Echo Show 5 has a 3.5 mm audio output port which the Google Nest Hub doesn't have, so you can, if you want, hook it up to a bigger speaker and improve the fidelity of the audio output. The Google Nest Hub doesn't have a camera, which the Echo Show 5 does have, so you can only make and receive video calls on the Amazon device.

It's also worth pointing out that the Google Nest Hub acts as a Chromecast device on top of everything else, so you can beam audio and video to it from just about every app on your phone (most audio and video apps on Android and iOS support the Chromecast standard at this point).

One of the bigger decisions you've got to make when choosing the Amazon Echo Show 5 or the Google Nest Hub is whether you prefer Alexa or Google Assistant. These two smart assistants are both impressively intelligent, and getting better all the  time – there's really not much to choose between them in terms of general tasks, whether that's reading out the weather forecast or reading out events from your calendar.

Where you will notice a difference is in the devices and services these smart displays work with. The Google Nest Hub works with YouTube and YouTube Music, for example, as well as Nest security cameras; the Amazon Echo Show 5 defaults to Amazon Prime Video and Amazon Music, and works very neatly with Ring security cameras (Ring is now owned and operated by Amazon). The best device for you might depend on the services and devices you're already using.

Both the Amazon Echo Show 5 and the Google Nest Hub let you set up customised routines, which means you can combine several actions to follow one voice command. You might say "good night", for example, to have all your smart lights turned off, your smart locks fastened, and your ambient evening playlist queued up.

There are a few reasons why you might pick the Amazon Echo Show 5 over the Google Nest Hub. The first is the size: the Amazon device is the smaller of the pair, which might influence your thinking. It can also do video calls and hook up to a separate speaker, and it's quite a bit cheaper.

Really though, choosing between these devices is about whether you're invested in the Amazon ecosystem and best pals with Alexa, or whether you spend more of your time with the Google Assistant and Google's other services and apps. Weigh that up and that should point you towards which smart display is right for you (though you can of course fill up your home with both Google and Amazon smart devices, if you want to).

If you've never used anything by Amazon or Google before, and this is your first smart home device, we'd be tempted to go for the Google Nest Hub – it looks a little nicer and has a slightly better user interface. The Amazon Echo Show 5 has a lot going for it too though, and Alexa and Google Assistant are pretty much on a par at this stage.