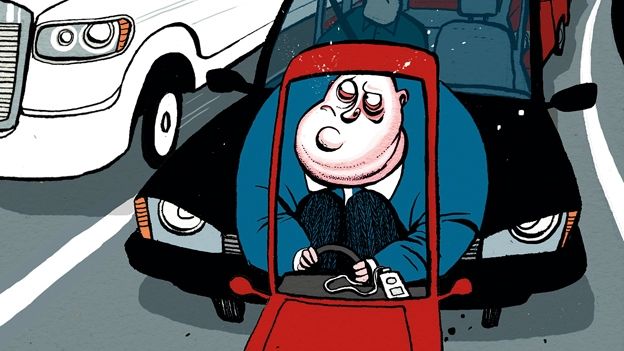 After a hectic week of working in the city, there shouldn't be anything nicer than heading out into the country for a couple of days of relaxation. But does it ever actaully end up like that?

A weekend in the country should be easy and relaxing. Yet it's always the small things that just seem to make those 48 hours away a little painful.

You wanted a 1950s open-top Merc, wicker picnic basket in the back, Louis Armstrong on the stereo, wind in your hair. You end up folded into a plastic cube about the size of a child's shoe, with a top speed of 52mph and a stereo that makes your iPhone sound like an asthmatic bee. You later find you could have rented a limo for the same price.

You've been on the road for 16 minutes. It's time to pull into the services– somewhere like Leigh Delamere, Knutsford, Chieveley or Kanye West– for an 11am burger and a browse around WH Smith. But first you ritually unclip the sat nav, even as it continues to desperately scream, “Turn around where possible!” and stuff it under your seat. Yep. That'll deter the criminal gangs who hang around services from breaking into your hot ride.

3. Deal with a strange oven

After a bracing, 18-hour drive you reach your rented cottage, spend half an hour pushing buttons on the off chance one of them turns on the leccy and decide to cook lunch. But instead of a gas hob and a fan-assisted oven you're faced with a rusting metal box resembling a steam train's coal furnace, towards which you gently manoeuvre a match while praying it won't explode.

The oven didn't work, but Google Maps says The Red Cock is only two miles away – an easy walk. But far from a casual jaunt beside babbling brooks, with the occasional stile to hop over, you're forced to trudge along a six-inch verge by the road, hoping the next boy racer who shoots by doesn't clip you and shatter your hip. On arriving, covered in mud, you find that the pub doesn't open in the day time, or at all on Wednesdays. Of course.

Despondent at the pub scenario, you feel compelled to tamper with nature's beauty, the ever-present lure of Instagram filters proving irresistible as you layer effect upon effect on to each photo, eventually rendering them less “Constable” and more “video for D12's 2001 hit Purple Pills”.

It's 8pm sharp, so the pub has finally opened. Eager not to seem like a big, townie ponce, you place your straw boater on the bar ask the wizened and glaring landlord for a pint of “Old Mad Hen”, which you've spied in the fridge, housed in a cardboard box shaped like a barrel. After one sip of this toe-curling, 11 per cent proof, Fanta-hued nectar you stop to notice all the locals are drinking Beck's Vier, before losing your vision entirely.

7. Rely on a stranger's DVD collection

Upon crawling back to the cottage, you crave entertainment, but you haven't seen 3G since Swindon and the TV only receives S4C. Not to worry: the owner has provided DVDs. Let's have a look: Free Willy 2? Highlander II: The Quickening? King Ralph? Dumb and Dumberer? You get excited when you spot Fight Club in the pile, only to open the case to find the disc for The Pink Panther – the Steve Martin version. It's going to be a long night.

8. Take photos of a cheese plate…

With a glass of red wine half in shot, a fire in the background and your feet on a stool. Congratulations! You are one of at least 100 holidaymakers shooting this exact tableau, right now.

9. Plan to read that ebook

You've had the hottest novel of 2009 on your Kindle since 2009 and now you finally have time to read it. However, after one sentence you're back on the iPhone trying once again to get past the insane bend of shot number 72 on Flick Kick Football, while texts continue to seep through from days ago when ever you accidentally move into the cottage's mystery square-inch of signal.

It's time to go home. You don't even bother packing the phone powered travel speaker you picked up at the Shell garage, you just add it to the pile of budget tech abandoned by travellers past. As tradition dictates, you must also leave one egg in the fridge and one item of clothing. Then you jump in your plastic car and belt it back to civilisation at 52mph. But wait… isn't that the sign for Knutsford Services?